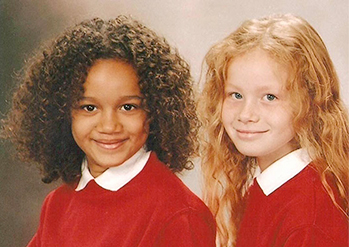 Lucy and Maria Aylmer are 18-year-old twins from the United Kingdom. They were born on the same day from the same mother, yet one has light skin and hair, and the other has dark skin and dark, curlier hair. Lucy told the New York Post, "No one ever believes we are twins because I am white and Maria is black."1 Strictly speaking, nobody is literally black or white, but their unique story illustrates how the diversity of human traits now found around the world could have arisen suddenly in Noah's offspring.

Although these twins' individual styles may accentuate their differences, their light and dark skin tones remarkably contrast. Their three siblings, however, have mid-tone skins—colors between either twin. When asked about their siblings' skin tone on Good Morning Britain, Lucy replied, "They're all quite in-between me and Maria as like opposite ends of the spectrum."2

Human skin tones do fit a spectrum, not simple, separate categories of black or white. Those whose skin bears more melanin appear darker, those with less melanin look medium-toned, and those with very little melanin appear lighter. And the genetic differences between any two people on the planet, regardless of skin tone, amount to a paltry 0.1 percent. Maria and Lucy help show why the concept of "race" has no real genetic basis. Our differences are mostly cultural.

Instead of "races," the Bible talks about peoples belonging to different nations or language groups. And people from different places can look quite different. How did these differences arise? Paul, speaking in Acts 17:26, said, "He has made from one blood every nation of men to dwell on all the face of the earth."

His declaration mirrors a key phrase found in Genesis 10:32, "These were the families of the sons of Noah, according to their generations, in their nations; and from these the nations were divided on the earth after the flood." So, from beginning to end, the Bible consistently explains how all nations descended from the "one blood" that flowed through Noah's veins.

If that's true, then how could all the trait variations we see around the world have arisen from just one man? Those who ask this question often assume that Noah looked like one of today's distinct people groups, which would not make sense. For example, if Noah were Asian, he probably would not have the genetic information for African or other people groups' features. Contrary to this notion, Noah and his wife's DNA must have carried trait information whose combinations resulted in a diverse assortment of features within their descendants. Distinct families then disbanded from Babel to the world.

Nowadays, when two members of different-looking nations or groups marry, they reunite the genetic information responsible for their trait differences. The combination can show up in wonderfully diverse ways in their children. The Aylmer family shows this. Though Mr. Aylmer has a European ancestry, his wife is half Jamaican, and they have children with a variety of skin tones.

So, could all the human-trait differences have arisen in just those five generations between Noah and the Tower of Babel dispersion? Since Lucy and Maria's trait variations occurred in just one generation, the answer seems to be an enthusiastic yes.

Image credit: Worldwide Features/Barcroft Media. Adapted for use in accordance with federal copyright (fair use doctrine) law. Usage by ICR does not imply endorsement of copyright holders.