The new evidence comes from old samples. Dozens of radiocarbon dates taken from wooden artifacts excavated at L’Anse aux Meadows [in Newfoundland] in the 1960s showed the site was about 1,000 years old. But radiocarbon dating was in its infancy at the time, and the margin of error was often measured in decades or even centuries.1

Now, it looks like Greenlanders migrated seasonally—if not settling for entire years—for at least 21 years after Leif’s historic voyage of discovery in A.D. 1000. Evidence for this comes from recent dendrochronology data that links to solar storm indicators.


In A.D. 993, a storm on the sun released an enormous pulse of radiation that was absorbed and stored by trees all over the Earth. Now, that solar event has proved a critical tool in pinpointing an exact year the Vikings were present in the Americas.1

Historical records, cross-indexed by corroborating forensic science-verified evidences, report that Leif “the Lucky” Eiriksson and his Greenland Viking crew visited “Vinland the Good”—apparently somewhere at or near Newfoundland, New Brunswick, Labrador, and/or Maine—during the year A.D. 1000.3

Because 11th century Greenland was virtually devoid of timber—which was always needed for many purposes—the unlimited supply of timber, in Vinland and in nearby Markland (today’s Labrador), attracted repeated voyages by Greenlanders’ knarr longships. Unsurprisingly, these Vikings enjoyed Vinland’s coastal salmon, which they reported as larger than what they caught in Greenland’s coastal waters.3

But the climate was slowing changing in North Atlantic regions, as the Medieval Warm Period shifts slowly but surely into the Little Ice Age. Accordingly, as the number of ice-free travel months shrunk—between Greenland and North American shorelands—the opportunities for safe travel between Vinland and Greenland dropped.3

But some are skeptical that Greenland Vikings ever visited Vinland so frequently after Leif’s original visit. That skepticism, however, is now challenged by a combination of dendrochronology (calculating timeframes according to tree ring analysis3) linked to empirically observable marks of historic solar storm activity.1


Now, thanks to that cosmic storm in 993, researchers can assuredly say that Vikings were working away at their tiny outpost in the north Atlantic exactly 1,000 years ago, in 1021, according to a study published today in the journal Nature.1 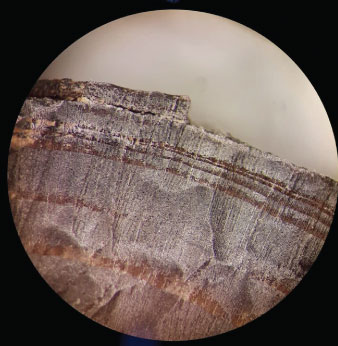 Microscope image of a wood fragment from the Norse layers at L’Anse aux Meadows.
Image credit: Petra Doeve
This calculation (of exactly 1,000 years ago) is based upon examining tooled wood—wood that had been clearly shaped by tools Native Americans did not possess. This wood contains tree ring “spikes” that indicate the A.D. 993 solar storms, and counting outward from these “spikes” to the bark yields 28 rings, supposedly representing 28 years. However, this method assumes that each year between A.D. 993 and A.D. 1021 had exactly one growth ring, which might or might not have been the case. This further assumes that the tree was felled (and stopped producing growth rings) in the same year that Vinland Vikings used woodworking tools on its timber.


Transatlantic exploration took place centuries before the crossing of Columbus. Physical evidence for early European presence in the Americas can be found in Newfoundland, Canada [at L’Anse aux Meadows] … Here we provide evidence that the Vikings were present in Newfoundland in AD 1021. We overcome the imprecision of previous age estimates by making use of the cosmic-ray-induced upsurge in atmospheric radiocarbon concentrations in AD 993.2

The scientists described their research methodology as follows:


In our study, we use an advanced chronometric approach to anchor Norse activity in the Americas to a precise point in time. Exact-year 14C results can be achieved by high-precision accelerator mass spectrometry (AMS) in combination with distinct features in the atmospheric 14C record. Measurements on known-age (dendrochronological) tree rings show that 14C production usually fluctuates by less than 2% per year. However, such time series have also revealed that production of the isotope rapidly increased in the years AD 775 and AD 993 by about 12% (which manifests as a decrease of about 100 14C yr)24 and about 9% (about 70 14C yr), respectively. These sudden increases were caused by cosmic radiation events, and appear synchronously in dendrochronological records all around the world. By uncovering these features in tree-ring samples of unknown age, it is possible to effect precise pattern matching between such samples and reference series. In so doing, if the bark edge (or more specifically, the waney edge) is also present, it becomes possible to determine the exact felling year of the tree. Moreover, it is not necessary to have 14C dates for the outermost growth rings, because once the ring that contains the AD 993 anomaly has been detected, it simply becomes a matter of counting the number of rings to the waney edge. On the basis of the state of development of the earlywood and latewood cells in the waney edge, one can even determine the precise felling season.2

Of course, this specific set of data observations, as so analyzed, only established the timeframe (almost to the year, assuming that each year is represented by one and only one growth ring4) for when the trees were felled, presumably by Vinland-visiting Vikings, that were used to produce the wood that was dendrochronologically analyzed 1000+ years later. Obviously, the Vikings who visited Vinland felled more than one tree—and did so over a series of years.

So, the researchers’ primary conclusion is justified, by their use of some empirical science to corroborate historical facts previously established by forensic science:


We provide evidence that the Norse were active on the North American continent in the year AD 1021. This date offers a secure juncture for late Viking chronology. More importantly, it acts as a new point-of-reference for European cognisance of the Americas … In addition, our research demonstrates the potential of the AD 993 anomaly in atmospheric 14C concentrations for pinpointing the ages of past migrations and cultural interactions. Together with other cosmic-ray events, this distinctive feature will allow for the exact dating of many other archaeological and environmental contexts.2

As has been reported previously by this author, judging assumptions is very important for learning about no-longer-observable events of the past, because apart from a reliable eyewitness it is easy to guess amiss.5 Thus, in this case—involving Viking tool-worked wood remains, the dendrochronology analysis, standing alone, could be easily misinterpreted by wrong assumptions. However, the greater context of forensic science factors—including review of Norse Viking coin evidence (found in Maine), the Viking spindle whorl (also found at L’Anse aux Meadows), corroborative Icelandic sagas, as well as reports of Markland’s features by other European contemporaries, etc.—is needed to ensure an adequately contextualized evidence-weighed analysis.3

Meanwhile, the ultimate illustration of this evidentiary principle is the Holy Bible itself, God’s gift of truth to mankind—because apart from the Bible we would not know Who the Lord Jesus Christ is.

And knowing the truth about Christ—our Creator and our Redeemer—is absolutely critical for life here and hereafter. And this is eternal life, that they may know You, the only true God, and Jesus Christ whom You have sent. (John 17:3)

*Dr. Johnson is Associate Professor of Apologetics and Chief Academic Officer at the Institute for Creation Research.