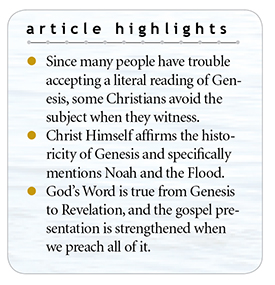 Some Christians claim that insisting on a literal Genesis is a hindrance to evangelism. Since science has supposedly proved that the creation and Flood it describes weren’t real, historical events, they see a literal Genesis as an intellectual stumbling block to potential converts. However, this thinking is completely backward. It is the denial, not the affirmation, of Genesis that is damaging to effective evangelism.

It’s logically inconsistent for Christians to accept the Bible’s testimony about Jesus Christ while at the same time rejecting its testimony about creation and the Flood. The Lord Jesus Himself confirmed the occurrence of Noah’s Flood (Luke 17:26-27) and implicitly affirmed the doctrine of recent creation (Mark 10:6; 13:19; Luke 11:50-51). Since Jesus Christ is the Creator (John 1:3), it makes no sense for Christians to ignore His testimony regarding Genesis.

There is a second, more subtle way that a denial of Genesis—particularly a denial of the Flood—harms evangelism. The apostle Peter hints at it in 2 Peter 2:4-9:

For if God did not spare the angels who sinned, but cast them down to hell...and did not spare the ancient world, but saved Noah, one of eight people, a preacher of righteousness, bringing in the flood on the world of the ungodly...then the Lord knows how to deliver the godly out of temptations and to reserve the unjust under punishment for the day of judgment.

Peter uses the past examples of God’s judgment to make two points. First, God can and will deliver the righteous. Second, God can and will punish the ungodly. Every example Peter cites comes from Genesis. Because God has already demonstrated His ability and willingness to punish sin, we cannot afford to dismiss the Bible’s solemn warnings about the coming final judgment (Revelation 20:11-15).

Christians who deny or downplay the reality of the Flood are blunting the effectiveness of their own evangelistic appeals. Why should sinners feel the need to “flee from the wrath to come” (Luke 3:7) if the Genesis Flood, the most spectacular example of God’s wrath in the entire Old Testament, never actually happened?

Skeptics assert that there’s no evidence for a global flood. But should Christians really be surprised that scoffers “willfully forget” and deny the reality of God’s past judgment? Peter told us such scoffers would come (2 Peter 3:3).

The Genesis Flood really happened. The testimony of Scripture and of the Lord Jesus Himself confirms its reality, as does science.

No, the Genesis Flood really happened. The testimony of Scripture and of the Lord Jesus Himself confirms its reality, as does science. The trillions of fossils entombed in water-deposited rocks are exactly what one would expect from a global flood. Instead of dodging or downplaying the Genesis Flood, Christians ought to be using it to help impress upon people their need for a Savior.

That is one reason ICR exists. Our articles, DVDs, and books show how the scientific evidence, rightly interpreted, strongly confirms the claims of Scripture. And this evidence provides a wonderful opportunity to show both Christians and non-Christians alike that the Bible is completely true—starting in Genesis.