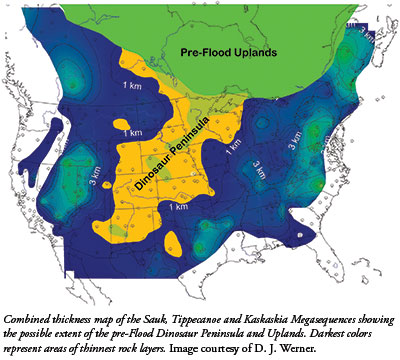 One of the unsolved mysteries of secular science is why so few dinosaurs are found in rocks from supposed tropical regions, especially the Triassic system rocks. Jessica Whiteside of the University of Southampton, UK and her colleagues from eight other institutions have proposed a solution to this enigma.

Her report, published online in the Proceedings of the National Academy of Sciences, claims climate change as the culprit, fitting with today's all-too-common trend of blaming many "bad" things on climate change.1 The researchers concluded that increased levels of CO2 in the atmosphere at the time created rapidly fluctuating climatic conditions that were inhospitable for dinosaurs.

"It was not a happy place for them [the dinosaurs] to be hanging out," claimed co-author Nathan Smith, from the Dinosaur Institute, Natural History Museum of Los Angeles County.2

The authors completed an intensive study of Triassic system rocks exposed in northern New Mexico, which they claim were at 10-14o N latitude at the time of deposition, placing the area in the tropics.

Although they found smaller reptiles preserved in these water-deposited rocks, most sauropodomorph (long-neck) dinosaurs and larger theropods (predators) were absent.

Smith said, "Dinosaurs are fast-growing and have high metabolic needs. It makes sense that if you are going to have these wild swinging fluctuations [in temperature and rainfall], that the animals that are biggest and growing fastest are the ones that are suffering."2

The researchers claim that rapidly changing climatic conditions, wildfires, sudden plant deaths, and hot temperatures prevented dinosaurs from living in the tropics. It all sounds dramatic, but is it factual or speculation? If we examine the rock data from a Flood perspective, we see there really is no mystery to solve.

First, secular scientists assume the dinosaur fossils they find actually lived in those areas. They believe the fossils reflect life at that exact location, and faunal diversity is a reflection of life at that time millions of years ago. In stark contrast, creation scientists recognize that the fossils are a record of death and burial during the great Flood around 4,400 years ago, and many creatures were likely transported great distances before fossilization.

Second, the high frequency fluctuations in CO2 found in the rocks are not necessarily indicative of ancient atmospheric conditions—the CO2 in question is not an ancient air sample. And even if there were some type of atmospheric fluctuation, these conditions would have been worldwide, not just affecting the tropics.

The observed differences in carbon isotopes could just as likely be a record of rapidly changing sources of water from different latitudes during inundation by the rising Flood waters. Stable isotopes of organic carbon, as measured in the study, are known to fluctuate with latitude in shallow oceans.3 The numerical range of claimed carbon fluctuations found by these researchers fall well within these ocean values.1

Third, many of the areas claimed by the secular scientists to be in the tropics at the time, places containing few dinosaurs, are also areas of exposed crystalline crustal rocks today.1 In other words, the lack of dinosaurs is partly due to a lack of preserved sediments in these areas. Without sediments to preserve them, there are no fossils of any sort and therefore no dinosaur fossils.

Finally, ICR researchers have identified locations on the pre-Flood world where dinosaurs appear to have lived and were independent of climatic fluctuations.4 During the Flood, dinosaurs were merely buried in a definable order as the waters progressively inundated more and more of the land as described in Genesis 7.

Our map of "Dinosaur Peninsula" shows a hypothetical landmass extending down the length of the United Sates from Minnesota to New Mexico (Figure 1). This low-lying land area (lower than the pre-Flood uplands but still above water) was full of all sorts of dinosaurs, big and small, as found in the rock layers. This area was also swampy.

Eventually, as the subsequent rock layers reveal, the larger dinosaurs were completely encased in Flood sediments, in rocks of the Jurassic and Cretaceous systems.

So, there really is no mystery involving missing dinosaurs. It's just the order of burial we observe in today's rocks. The Bible tells us plainly that the Flood rose higher and higher until all the high hills were covered. The earliest dinosaur-bearing layers merely represent the initial flooding of the pre-Flood Dinosaur Peninsula.

*Dr. Tim Clarey is Research Associate at the Institute for Creation Research.

Human DNA Variation Linked to Biblical Event Timeline
Each person is different, and each, except an identical twin, has unique DNA differences. These differences can be traced across global populations...
BY: JEFFREY P. TOMKINS, PH.D.

Evolutionary Dogma, Not Science, Kicks Out Adam
Secular geneticists continue to claim that humans did not come from a literal Adam and Eve.1 But if clues in the human genome do not reject...
BY: BRIAN THOMAS, PH.D.
More Creation Science Update

Adaptive Genetic and Epigenetic Changes in Plants
Being sedentary organisms, plants are essentially stuck where they are planted and need to dynamically adapt to the conditions around them to not only...
BY: JEFFREY P. TOMKINS, PH.D.

Don Rohrer, Icon of ICR, Passes
An icon of ICR during the early years was Chief Financial Officer Don Rohrer who was recently ushered into Glory. I first met Don in 1995 while applying...
BY: FRANK SHERWIN, D.SC. (HON.)
The Latest
NEWS   ACTS & FACTS   PODCASTS