How would a vehicle slow or stop on time or on target without some mechanism to disengage the engine from the drive train? 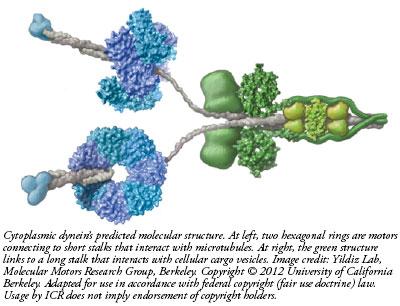 The dynein motor walks along microtubules, which are like train tracks inside cells. One end of the two-motor complex, which is a complex of 12 separately manufactured protein parts, has a long stem that acts like a trailer hitch attachable to a cargo bundle. At the other end, a short stalk connects to a pair of molecular leg-like appendages that alternately attach and detach as they literally walk down the length of a microtubule. This way, a cell transports products from one area to another. But what if there was no way to control how fast the dynein walked?

Without a clutch-like mechanism to regulate its speed, a cellular motor would carry its cargo too fast and too far, requiring constant cargo re-routing. Too much of such confusion would disrupt the cell's finely tuned and highly efficient inner workings. In short, failure to regulate the speed of protein motors could cause fatal intracellular traffic jams.

Fortunately, dynein motors are modulated by what researchers called a "clutch." A separate protein named "Lis1" attaches right where the appendages connect to the dynein's central motor. When the researchers added Lis1 to fully fueled dynein motors, they watched the dynein walking action slow down dramatically.2 The study authors reasoned that Lis1disrupts the connection between dynein motors and their walking appendages, much like a clutch disengages an automobile engine from the transmission.

The specified complexity of Lis1, which is exactly the right size, shape, strength, and charge to fit perfectly into its notch on the dynein complex and fulfill its purpose, is one of thousands of essential details that the Creator provided for living cells.

Massive Cache of Dangerous Carnivores Found
Recently, a new study published in the journal ZooKeys has claimed to have found the most dangerous location to live in Earth’s history.1...
BY: TIM CLAREY, PH.D.
More Back to Genesis
The Latest
NEWS   ACTS & FACTS   PODCASTS