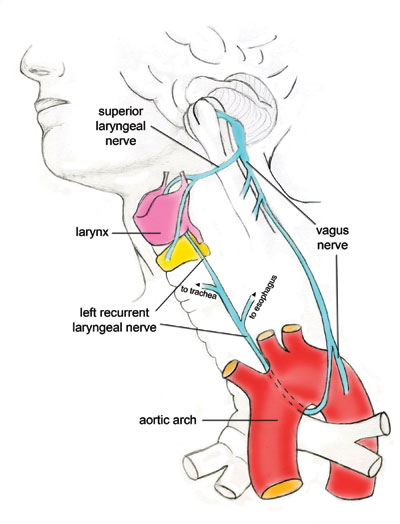 A common claim by evolutionists is that the human body is poorly designed, which to them is evidence that it was not intelligently designed, but rather cobbled together by the unintelligent process of evolution. One of the most frequent examples of poor design cited by evolutionists today is the recurrent laryngeal nerve (RLN), which controls the mammalian larynx (voice box) muscles. Paleontologist Donald Prothero wrote that examples of "poor or at least very puzzling design can be accumulated endlessly," thus proving evolution, with one of the best examples being "the recurrent laryngeal nerve, which connects the brain to the larynx and allows us to speak."

In mammals, this nerve avoids the direct route between brain and throat and instead descends into the chest, loops around the aorta near the heart, then returns to the larynx. That makes it seven times longer than it needs to be.1

Although the laryngeal nerve does not take the shortest route to the larynx, this is also true for many other nerves. The optic nerves do not take the shortest route to the occipital lobe of the brain (the lobe near the back of the head), but rather cross over at the optic chiasm (where the two tracts cross over in the form of an "X") for reasons now known to be based on good design. The nerves from the right side of the brain go to the left side of the body (except for the right and left frontal branches of a facial nerve, which are supplied by both sides of the brain) also for good reasons.

Likewise, the left RLN has a different anatomical trajectory than one would first expect, and for very good reasons. In contrast to Prothero's claim, the vagus nerve (the longest of the cranial nerves) travels from the neck down toward the heart, and then the recurrent laryngeal nerve branches off from the vagus just below the aorta (the largest artery in the body, originating from the left ventricle of the heart and extending down the abdomen). The RLN travels upward to serve several organs, some near where it branches off of the vagus nerve, and then travels back up to the larynx.2

Reasons for This Design

The most logical reason is that the RLN design is due to developmental constraints. Eminent embryologist Professor Erich Blechschmidt wrote that the recurrent laryngeal nerve's seemingly poor design in adults is due to the "necessary consequences of developmental dynamics," not historical carryovers from evolution.3

Human-designed devices, such as radios and computers, do not need to function until their assembly is complete. By contrast, living organisms must function to a high degree in order to thrive during every developmental stage from a single-cell zygote to adult. The embryo as a whole must be a fully functioning system in its specific environment during every second of its entire development. For this reason, adult anatomy can be understood only in the light of development. An analogy Blechschmidt uses to help elucidate this fact is the course of a river, which "cannot be explained on the basis of a knowledge of its sources, its tributaries, or the specific locations of the harbors at its mouth. It is only the total topographical circumstances that determine the river's course."4

Due to variations in the topographical landscape of the mammalian body, the "course of the inferior [meaning lower] laryngeal nerve is highly variant" and minor anatomic differences are common.5 Dissections of human cadavers found that the paths of the right and left recurrent laryngeal nerves were often somewhat different from that shown in the standard literature, illustrating Blechschmidt's analogy.6

The human body begins as a sphere called a blastocyst and gradually becomes more elongated as it develops. Some structures, such as the carotid duct, are simply obliterated during development, and some are eliminated and replaced. Other structures, including the recurrent laryngeal nerve, move downward as development proceeds. The movement occurs because the neck's formation and the body's elongation during fetal development force the heart to descend from the cervical (neck) location down into the thoracic (chest) cavity.7

As a result, various arteries and other structures must be elongated as organs are moved in a way that allows them to remain functional throughout this entire developmental phase. The right RLN is carried downward because it is looped under the arch that develops into the right subclavian artery, and thus moves down with it as development proceeds.8

The left laryngeal nerve recurs around the ligamentum arteriosum (a small ligament attached to the top surface of the pulmonary trunk and the bottom surface of the aortic arch) on the left side of the aortic arch. It likewise moves down as the thoracic cavity lengthens. The body must operate as a living, functional unit during this time, requiring ligaments and internal connections to secure various related structures together while also allowing for body and organ movement. For the laryngeal nerve, the ligamentum arteriosum functions like a pulley that lifts a heavy load to allow movement.

As a result of the downward movement of the heart, "the course of the recurrent laryngeal nerves becomes different on the right and left sides."9 These nerves cannot either be obliterated or replaced because many of them must function during every fetal development stage. Blechschmidt notes that "no organ could exist that is functionless during its development," an axiom that also applies to the nervous system.10 This movement appears designed to position the left RLN downward as the body elongates.

In addition, "the laryngeal branch splits up into other branches before entering the larynx at different levels."11 These many RLN branches serve several other organs with both motor and sensory branches, including the upper esophagus, the trachea, the inferior pharynx, and the cricopharyngeus muscle, the lowest horizontal bandlike muscle of the throat just above the esophagus.12 Neuroanatomists describe larynx innervation as "complicated" and they are still trying to work out the specific targets of its nerve branches. The fact that the left RLN also gives off some fibers to the cardiac plexus is highly indicative of developmental constraints because the nerve must serve both the larynx (in the neck) and the heart (in the chest).

As noted, after looping around the aorta, the RLN travels back up to innervate the larynx. The superior (meaning upper) and recurrent laryngeal nerves then innervate an area known as Galen's anastamosis. Other cases exist of one nerve splitting off early and providing direct innervations, and another taking what seems like a circuitous route. One example is the phrenic nerve that arises in the neck and descends to connect to the diaphragm. This is a necessary path, since the pericardium and diaphragm arise in the septum transversum (a thick mass of tissue that gives rise to parts of the thoracic diaphragm and the ventral mesentery of the foregut) in the neck area of the early embryo.

It then migrates caudally (toward the tailbone) as the embryo enlarges by differential growth of the head and thorax areas, taking the nerve with it. The diaphragm cannot have evolved step-wise, since a partial diaphragm results in an imperfect chest-abdomen separation. Even a small defect results in herniation of the gut contents into the chest--which either compresses the lungs or results in strangulation of the gut.

A complicated issue still being researched is how the incredibly complex nerve-muscle system, the component nerve fibers, and the laryngeal muscles arise from the neural crest (cells between the epidermis and the neural tube that develop into the brain and spinal cord) and dorsal somites (cells that develop into muscles and vertebrae) respectively in the early embryo, and then migrate anteriorly (towards the front of the body) into their final positions. Without explaining the nerve structure's design system, function, and ultimate connections, alleging that the RLN is a poor design is a meaningless assertion.

Thus, the claim that it has to loop up the distance from the ligamentum arteriosum for no reason is invalid. For all these reasons, Prothero's conclusions are incorrect and poorly considered:

Not only is this design wasteful, but…the bizarre pathway of this nerve makes perfect sense in evolutionary terms. In fish and early mammal embryos, the precursor of the recurrent laryngeal nerve [is] attached to the sixth gill arch, deep in the neck and body region.13

Aside from the developmental reasons for the circuitous route, certain benefits of overlapping sensory and motor innervations result when one of the nerves is slightly longer. One reason why laryngeal nerve branches are located both above and below the larynx (both branch off the vagus) is because this design allows some preservation of function if either one is interrupted. The redundant pathway also provides some backup in case of damage to one of the nerves.

Knowledge of the laryngeal innervation will help us to understand the necessity for the slightly longer route for a nerve, and a hint is provided from the fact that the two nerves regulate different vocal responses. Paralysis of the superior laryngeal nerve (the non-circuitous nerve) causes difficulty in increasing voice loudness, producing a high pitch, vocal fatigue, and an inability to sing because the vocal cords lack their normal tone and cannot sufficiently lengthen. In contrast, paralysis of the recurrent nerve results in a weak voice that sounds like Mickey Mouse.

In one patient, a traumatic rupture of the aortic arch in a car accident required an aortic graft that left him with a severed left RLN. Although his voice was slightly feeble, his articulation was unaffected. He speaks perfectly well, but cannot project his voice because the laryngeal muscles have multiple innervations and the set as a unit controls its function.

Finally, several studies found that the existing path occupies a relatively safe position in a groove that renders it less prone to damage or injury than a more direct route.15

Arguing that the left RLN is poorly designed implies that God should have used different embryo developmental trajectories for all the structures involved to avoid looping the left RLN around the aorta. One who asserts that the RLN is a poor design assumes that a better design exists, a claim that cannot be asserted unless an alternative embryonic design from fertilized ovum to fetus--including all the incalculable molecular gradients, triggers, cascades, and anatomical twists and tucks--can be proposed that documents an improved design. Lacking this information, the "poor design" claim uses evolution to fill in gaps in our knowledge. Furthermore, any alternative embryonic design pathway would likely result in its own unique set of constraints, also giving the false impression of poor design.

The left recurrent laryngeal nerve is not poorly designed, but rather is clear evidence of intelligent design:

The arguments presented by evolutionists are both incorrect and have discouraged research into the specific reasons for the existing design.