In order for tufted, horned, and Atlantic puffins to “be fruitful, multiply, and fill” specific habitats on Earth,1 they need the right equipment. That requires God-given design bioengineering fitted for interfacing with dynamic conditions of habitats that they will “fill.”1,2 As living exhibits, puffins present God’s “clearly seen” handiwork and glory.2

Thanks to Christ’s providential bioengineering, puffins have the right equipment—for continuous environmental tracking (CET)—fit for living in the cold coastlands and northern seas of the Atlantic and Pacific Oceans.2-4

Some puffin CET traits are physical, such as anatomical parts and physiological systems needed for activities on land, in water, and in air. Yet other CET traits are intangible, such as gaining and/or applying know-how (and know-when)—what the Bible calls “received wisdom”5—when making life-protecting decisions in real time to avoid hungry predators.

Some evolutionists recently studied and videographed the flying behaviors of puffins, plus their biophysical movements in ocean-water diving and swimming underwater.4 The results surprised them; these constantly moving clown-looking birds exhibited metabolic energy efficiency, for hours and days, in both air and ocean habitats.4

Yet creationists were not surprised because the Lord Jesus bioengineered puffins to move efficiently in both fluids—liquid seawater and gaseous air currents—minimizing wasted metabolic energy, even in a fallen world.4 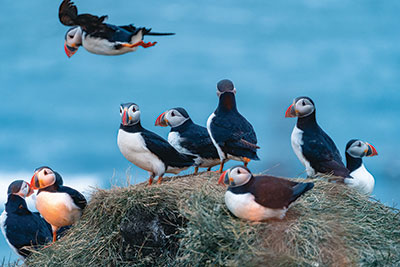 Puffins avoid many bird-eating predators simply by flying to and from island clifftop heights that are inaccessible to four-footed carnivores such as dogs, foxes, cats, river otters, martens, and rats.3 However, seals may attack puffins underwater, so puffins must stay alert for more than fish whenever they are fishing underwater. Moreover, puffins keep alert eyes whenever flying because airborne predators include eagles, hawks, skuas, and large gulls—with the great black-backed gull being the most threatening.3

Yet puffins are wise—they learn.5 Many puffins, such as some whom this writer observed on Staffa, an island in the Hebrides, have somehow learned that settling in clifftop grasses near human tourists is a safe place because predatory seagulls are reluctant to land on clifftops where humans are present.3

The Lord Jesus wisely endowed puffins with helpful traits—physical bodies for interfacing with air and sea plus learning abilities—so they can recognize human “neighbors” as a cue showing where to land safe from predatory seagulls.