Science educators' beliefs about origins are very important. It is generally assumed by creationists that most science teachers hold to beliefs that are not consistent with a creationist perspective. This assumption can be based on several lines of reasoning: (1) it is known that widely used secular textbooks are evolutionarily based (Deckard, 1996); (2) teachers use these textbooks extensively,3 and (3) the media bombards the American public with daily doses of evolutionarily-based news. The purpose of this article is to present and discuss some recent ICR research related to science teacher's beliefs.

Summary of Responses to Origins Belief

Overman (1997) surveyed science teachers listed in the U.S. Registry of Science Teachers using a Likert scale instrument. Part of the survey presented statements for measuring teachers' origins beliefs. The survey contained four evolution-oriented statements and four creation-oriented statements. 1,026 individuals were sent the survey. Three hundred and ninety-one surveys were returned. Of these, 313 were complete and could be analyzed. The table on the previous page presents the percentage of teachers' responses to the origins belief statements.

The individual statements reveal some interesting trends. For example, item one probes the issue of the acceptance of evolution as a fact. Forty-four percent agree that evolution is a fact while 39% percent disagree. These results are quite different from the findings of Tatina (1989). His survey of South Dakota biology teachers claimed that almost 70% believe the modern theory of evolution. These contrasting results suggest that biology teachers may be more thoroughly indoctrinated into evolutionary thinking than a more general cross section of science teachers. Additionally, item six shows that only 59% hold to the historicity of the Bible. These observations may indicate a general lack of understanding of Biblical Creationism amongst the respondents. There also seems to be a lower view of the Bible among the respondents when compared to the general population. This is indicated by a 1993 Gallup Poll reporting that 83% of the general population believe the Bible to be the inspired word of God.

Overall the results appear to indicate that science teachers do not understand that the Bible and evolutionary theory are diametrically opposed. This could be indicative of a theistic evolutionary tendency in these science teachers' beliefs. Tatina supports this contention, "evolution is not included in more biology classes because it is not believed . . . this belief was not founded in adequate understanding nor was it unanimous." This confused theistic evolutionary tendency would be of concern to the creationist community since the potential for a mixed message is great. North highlights the problem:

Christians have not been shown clearly and decisively that Darwinism is a total worldview, and that by accepting any aspect of this worldview, Christians compromise and weaken the presentation of the Christian worldview, as well as risk disobeying God. They have not been shown how evolutionism spreads like cancer from the geology or biology textbook to every area of personal ethics and public policy. Worse, they have not been shown why and how six-day creationism leads to a fundamentally unique worldview that encompasses things other than academic topics like historical geology and biology. To win the battle with Darwinism, which is above all a comprehensive worldview justifying comprehensive power, six-day creationists must believe that the stakes are far larger than mere laboratory experiments or one-evening debates. Creation scientists must demonstrate to Christians that six-day creationism really makes a difference in every area of life (1988, pp. xiv-xv).

Overman's survey (1997) confirmed this problem, finding that those who hold to evolutionary beliefs tend to have moral views that are contrary to the character of God. This finding will be discussed in a later article.

A collective analysis reveals some interesting and important aspects. For example, the range of undecided individuals is 16-21%. This indicates the presence of a sizable number of science teachers who have not made up their minds on some important aspects of the creation/evolution debate. This group of individuals can be impacted in their thinking. This group of undecided, coupled with the apparent contradiction in beliefs indicated from the analysis of items 1, 6, and 8 above, show a general state of confusion about creation and evolution among these teachers. More original research by creationists and continued clear presentation of the creationist message may begin to clear up some of the confusion while impacting the undecided group. 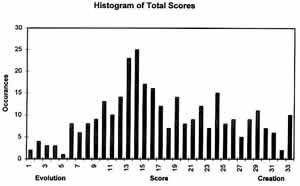 The histogram to the left reveals that the views of the surveyed teachers are not strongly held on either side of the issue (creation/evolution). There also are more science teachers who hold a creationist view than those holding an evolutionary view (comparing 1-5 and 29-33) and those with a creationist view tend to hold their view more strongly. This shows that there is more intellectual support for the creationist message among these teachers than expected. The histogram confirms that numerous science teachers do not hold a clear creation or evolution view. As the creationist lines of scientific inquiry continue to advance, there is a group of teachers waiting to latch onto new creationist discoveries. Finally, the histogram lends support to the idea that many of the respondents may hold theistic evolutionary beliefs.

This report indicates the need for further research. For example, surveys of other science teacher populations such as the National Association of Biology Teachers (NABT) members could prove valuable and interesting. Up to the present, the NABT has been more vocal than the NSTA about their stance on the creation/evolution controversy. They have published a set of evolutionary tenets.4 The research presented here suggests there may be a mismatch between teacher beliefs and the tenets of the organization. It also appears that there exists a mismatch between the science teachers' beliefs about origins and what they are teaching. If Yager is correct in saying that 90% of the teachers teach from the textbook 95% of the time and the textbooks are evolutionary based, only a small number of the respondents seem tobelieve strongly to what they are teaching. Also, a sizeable number of the respondents may be using teaching materials which do not match their beliefs and may be in conflict with their worldview.

1 Richard Overman is an ICR graduate and President of Creation Education Resources, P.O. Box 1853, Orange Park, FL 32067-1853.
2 Dr. Deckard is Assistant Professor in the ICR Science Education Department.
3 This is supported by Yager who reports that "over 90% of all science teachers use a textbook 95% of the time; hence the textbooks become the course outline, the framework, the parameters for the students' experience, testing, and a worldview of science" (p. 576 ,1983).
4 NABT Position Statement on Teaching Evolution, News and Views (pp. 4-5), June 1995.

North, G. 1988. Is the World Running Down? Crisis in the Christian Worldview. Institute for Christian Economics, Tyler, Texas.