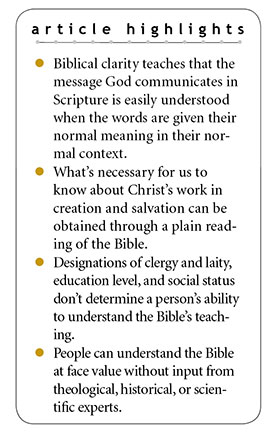 Can an average person without a Ph.D. in science or theology acquire a correct understanding of what the Bible means just by reading an accurate translation on their own? Did God communicate clearly what He wants to say to people at any time and in any culture? The answers matter.

We began this Engineered Adaptability series of articles with an exposition of Romans 1:18-25 to establish a basic premise—that certain attributes of God are clearly seen through the workmanship we observe in living things.1 But to reach that conclusion, we first had to presuppose that God plainly communicates His thoughts to us through the Bible’s words regardless of whether we are a religious cleric or a hotel clerk. That understanding is known as the doctrine of biblical clarity.

The message God communicates in Scripture is easily understood when the words are given their normal meaning in their normal context.

I recently participated in a debate with a theistic evolutionist and a progressive creationist in which I presented the evidence for the continuous environmental tracking model of adaptability described in this Engineered Adaptability article series.2 The focus quickly moved from science to a discussion of whether Christians could reliably arrive at a correct biblical interpretation just by giving the words their normal meaning in their normal context, or whether it was essential to consider outside information supplied by scientists and other experts. Even though everyone on the panel claimed to endorse biblical inerrancy, there was a sharp division over biblical clarity.

It is vital today for Christians to understand what the clarity of Scripture means. Theological and scientific elites insert themselves as an essential interpretive filter between the Bible and its readers. The truth underlying biblical clarity sets the Christian free from this bondage since it places readers directly under the authority of the Bible, not the elite. The doctrines of biblical inspiration and biblical clarity go hand in hand, but clarity touches the Christian in a personal way. Knowing that God can communicate clearly to anyone who reads His Word is liberating. But that same truth is a threat to someone who wants to control people by telling them what the Bible means and not letting them learn it for themselves.

The Institute for Creation Research has always championed the clarity of Scripture. Biblical clarity and the normal interpretation of Scripture are two sides of the same coin. When we give the Bible’s words their normal meaning in their normal context—just as we do for any other piece of literature—we take for granted that God clearly communicates His thoughts in a plain language anyone can understand. This means that everything we need to know about Christ’s nature, works, and salvation is so clearly taught that a reader can obtain the essential knowledge from within the Bible itself without the intervention of outside sources.

So, since this Engineered Adaptability series is founded on the Romans 1 premise that Christ’s workmanship (i.e., design) in living things can be clearly seen, we must understand why we can have a face-value understanding of what the Bible teaches without necessarily waiting for theological or scientific experts to tell us what it means.

The Biblical Basis for the Doctrine of Biblical Clarity

Just like the doctrine of inspiration, the Bible is self-certifying concerning its clarity. In other words, the Bible teaches that its words are clear and sufficient in and of themselves to impart understanding without the need for specialized interpreters. Moses taught the truth of this in Deuteronomy 30:11-14:

Having the Word “in your heart” teaches that understanding precedes action. The Lord Jesus said that the Holy Spirit would personally lead believers into understanding the truth. Freedom comes from knowing that an indispensable clerical order isn’t needed to tell the laity what the Bible means. The Lord said in John 16:12-14:

“I still have many things to say to you, but you cannot bear them now. However, when He, the Spirit of truth, has come, He will guide you into all truth: for He will not speak on His own authority, but whatever He hears He will speak; and He will tell you things to come. He will glorify Me, for He will take of what is Mine and declare it to you.”

Not only does the Spirit of truth Himself clearly guide us today “into all truth,” He guided biblical believers as well. In Acts 8:26-35, the Spirit directed Philip to approach an Ethiopian eunuch reading from Isaiah. The Ethiopian understood the words, but he needed additional information not found in Isaiah, so “then Philip opened his mouth, and beginning at the Scripture, preached Jesus to him” (v. 35). In this case, the Holy Spirit guided Philip’s knowledge of God’s Word to share what the Ethiopian needed in order to hear the gospel and be saved.

When the apostle Paul traveled through Greece, he came to Berea and presented the gospel. An admirable description of the Bereans is recorded:

These were more fair-minded…in that they received the word with all readiness, and searched the Scriptures daily to find out whether these things were so. Therefore many of them believed. (Acts 17: 11-12)

Remarkably, the Bereans were not dependent on a scholar to tell them biblical truth; they checked out their Bibles to tell if what Paul said was true.

During a recent discussion between theistic evolutionists and members of a sister creationist ministry, one evolutionist’s assertion that scientists need to inform Christians on how to understand Genesis 1 was criticized by the creationists as “undermining the authority of Scripture.” But the evolutionists’ reassurances that they accept the inspiration and inerrancy of the Bible—which sounds like belief in its authority—seemed to nullify the creationists’ argument.

In a later conversation at that ministry, I suggested that it might be helpful to explain why diluting biblical clarity undermines Scripture’s authority in a believer’s life. This is because the believer allows a scientist to become their authority in telling them how to understand the Bible rather than letting the words of the Bible itself (and the Holy Spirit) guide them into a correct interpretation. Scientists now sit between the believer and the Bible.

ICR founder Dr. Henry Morris encouraged other Christian ministries to reclaim the clarity of Scripture, particularly as to the meaning of the words in Genesis. He emphasized this strongly in his book The Genesis Flood, written with Dr. John Whitcomb, and frequently thereafter.3 The importance of this doctrine was reiterated by ICR’s legal counsel, Dr. Jim Johnson, who said, “The understandability (what theologians like to call ‘perspicuity’) of the Scriptures is a foundational issue for Christian doctrine.”4 He detailed why biblical clarity was a vital doctrine of the Reformation, adding:

Many men and women—before, during, and after the Reformation—suffered persecution and even death to bring and teach the Scriptures to common people in their own languages so they could hear and study God’s Word for themselves. William Tyndale, when challenged by a fellow priest regarding the supremacy of the Pope, stated, “I defy the Pope, and all his laws; and if God spares my life, I will cause the boy that drives the plow in England to know more of the Scriptures than you!”4

From a scientific standpoint, the evidence is pretty solid that virgins don’t give birth and dead people don’t come back to life. Yet, Christians believe in the virgin birth and resurrection based on the clear words of Scripture, despite what scientists tell them. That invests the Bible with its rightful authority. When Christians give way to scientists telling them how to understand the Bible’s teaching on the creation or the Flood (paradoxically, areas where evolutionary explanations are weak), then they insert human authority between themselves and the Bible.

Biblical Clarity Versus the Assertions of Theistic Evolutionists

Creationists and theistic evolutionists not only diverge greatly over the scientific merits of evolutionary theory, but—just as importantly—also in their approach to Scripture and biblical clarity. Theistic evolutionists contrive ways to project onto the Bible beliefs like deep time, “survival of the fittest” before Adam’s sin, and human descent from animal ancestors. Until these evolutionary inventions became scientific orthodoxy, nobody found them in the Bible. Thus, biblical clarity rejects such concepts as:

No doubt Christians benefit from a solid exposition of biblical text that includes word studies and cultural or historical background material. This information may augment understanding of a biblical passage, but Christians should not allow additional sources to distort the plain meaning of the words in their context. If we buy into the notion that outside sources are needed to grasp the Bible’s meaning, then we also have to assume that for millennia no one could properly understand the words of Moses or Jesus Christ until today’s science informed their thinking with atheistic, anti-design assertions from Stephen Hawking, Neil deGrasse Tyson, Stephen Jay Gould, or Charles Darwin.

By reclaiming biblical clarity, Christians embrace a truth that releases them from the bondage of theological or scientific elites who smugly insert themselves as an essential interpretive filter between believers and the Bible. Christians, and especially pastors, do not need either a “holy man” or a “science guy” to tell them what the Bible means.

Christians, and especially pastors, do not need either a holy man or a science guy to tell them what the Bible means.

It seems that God delights in being very plain in what He says so that everyone can clearly get His message. The general revelation of God through His creative handiwork is “clearly seen” (Romans 1:20), and His special revelation in the Bible can be both clear and near to our hearts.