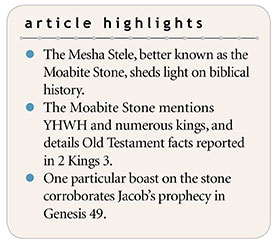 The Moabite Stone was discovered in 1868 in Dibon (Dhiban in modern-day Jordan). Also called the Mesha Stele, it was set in place as a monument by King Mesha of Moab around 830 BC. The stone is not only a reminder that archaeology is riddled with speculation, it also has interesting implications for biblical apologetics.

Recently, a secular archaeologist advocated a new guess about two letters in the Moabite Stone’s inscription.1 Israel Finkelstein used high-resolution photographs to scrutinize damaged portions of Line 31 and decided that an earlier expert, André Lemaire, was wrong. Lemaire reported one part as BT [D]WD.2 Finkelstein speculated that B[??] is correct, which could be BLQ—i.e., Balak, a Moabite king.1 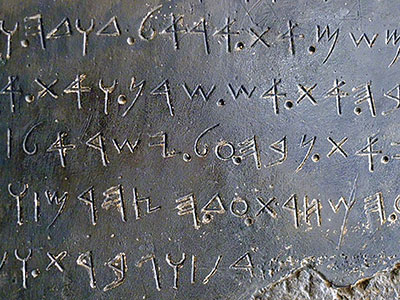 Detail of the Moabite Stone written by Mesha, king of Moab, around 830 BC. (Louvre, Paris.)
Image credit: Copyright © 2012 Mbzt. Used in accordance with federal copyright (fair use doctrine) law. Usage by ICR does not imply endorsement of copyright holder.

The king also bragged about defeating the tribe of Gad at Ataroth (Lines 10-13). The Bible, however, designates this and other place names on the stone as the territory of the tribe of Reuben.4 King Mesha designated Ataroth as land of the Gadites, but the Reubenites he never mentioned. Why were the Reubenites ignored, and why were the Gadites recorded with such respect, as if Gadite presence in Reubenite territory was noteworthy to the conquering king?4

The answer lies in Jacob’s prophecy in Genesis 49:1-4, 19. Jacob foretold that Reuben was “unstable as water” and would not excel (v. 4). When Mesha completely ignores Reuben, it corroborates the prophecy about Reuben. Even when Mesha brags about all his conquests in Reubenite territory, he sees no value in bragging about his conquest of Reubenites themselves.

Jacob prophesied about Gad differently: “He shall triumph [‘fight,’ ‘battle’] at last” (v. 19). Gad was a warrior tribe, an aggressive force to be reckoned with. They proved themselves as overcomers, although Gad’s future included some defeats—one of which, at Ataroth, Mesha records in Line 10. When Mesha brags about defeating the warrior Gadites, he verifies Jacob’s prophecy.4

The Moabite Stone is relevant to biblical apologetics. If the new study of Line 31 is correct, it reflects the King Balak referred to in the Bible’s Balaam story (Numbers 22–24). But regardless, the Moabite Stone already substantiates other aspects of biblical history, and even provides unintentional corroboration of fulfillments of Jacob’s prophecies about Reuben and Gad.