When you observe nature, especially living things, does what you see look purposeful or messy? In other words, do living things have body parts that look like they have a proper fit and function, or do they seem as though they were cobbled together through some kind of tinkering process?

In college, I was taught that evolution produced life’s great diversity. What some call “survival of the fittest” was said to be the process nature used to “tinker” with life.1 Living creatures looked messy to my teachers since to them life had evolved through chaotic, deadly struggles.

But their “biology is messy” claim left me less than persuaded. Why? Before attending medical school, I worked as an engineer for a decade. What I saw in anatomy and physiology courses looked like designed systems made to fulfill specific purposes. What’s more, they reflected designs that biomedical engineers would envy because of their extraordinary sophistication.

I have found that scientific methodology and understanding benefit when engineering principles are applied to how living things function.

Many man-made devices are designed to adapt to changing environments. The engineering principles underlying these designs are also the most accurate way to explain how organisms self-adjust to change. If biology isn’t messy but is structured enough for engineering principles to reasonably explain its various functions, then there should be supporting evidence.

For some, this verification comes from published studies on biological systems that have been reverse-engineered—i.e., methodically disassembled piece by piece to discover how they operate. But for others, the verification may simply be their own strong intuition that organisms are amazing products of ingenious craftsmanship.

People have a powerful predisposition to link organisms’ features with engineering design.2 They see the characteristics involved in the fabrication of man-made problem-solving products (i.e., engineering design), and they recognize those same characteristics in the problem-solving traits of living things. This cross-cultural intuition is a striking confirmation that engineering principles can explain how living things function.

A more important affirmation linking design principles to living things is found in the Bible. The reason people from any culture at any time can sense God’s glory is that human experience enables them to correlate the properties of human craftsmanship with the features of living things. The Bible says that these detectible distinctives of designing agency facilitate a universal conclusion that creatures are intelligently designed.

Scripture also explains, sadly, why many people try to suppress that inner truth.

The Revelation of God in Nature

Psalm 19:1-6 and Romans 1:18-25 are key passages stating that some of God’s attributes are revealed in nature. Both texts emphasize three important points.

Expounding on the text from Romans serves as an illustration.

English translations of Romans 1:18-25 are generally accurate and profitable for instruction. But since translations must be concise, some valuable information found in the original Greek pertaining to word usage or emphasis, timing, and so on isn’t always translated. Expounding this text will be helpful to uncover the deeper meaning.

1:18—God’s wrath is revealed from heaven against a lack of respect for God’s position and an irreverent disregard of Him, as well as against the sinful behavior of humans who suppress the truth—an evil act in itself. (One question pertains to exactly how God’s wrath from heaven is revealed, since no human-made sensor can detect it. Is it God’s abandonment, self-revenging physical illnesses, afflictions understood via a guilty conscience, or all of these?)

1:19—Because the thing capable of being known about God is plainly recognizable by its appearance, for God has made it undeniably evident to people.

1:20—For the unseen things of God are knowable from His agency that has caused the totality of the natural realm (what we call nature) to exist. In contemplating His workmanship of things, humans clearly see what allows them to make deductions about God’s unseen attributes, namely His unending inherent abilities and divine nature. (Psalm 92:5 and Psalm 104:24 comment on some things that are deducible about God—explicitly, His purposeful wisdom as reflected in nature.) So, mankind is without excuse.

1:21—Because when they gained this insight through experience, they actively did not acknowledge or credit3 the (true) God as God (in His status as Creator) or give thanks. Conversely, humans’ reasoning (about cause and effect) drifted into foolishness, and their insensible mental life lost its ability to perceive clearly.

1:22—Claiming that they are the product of scholarship, they revealed that they had in fact slid into foolishness.

1:23—And exchanged the credit due to the immaterial Creator God for substitute material representations (of nature) resembling man, birds, four-footed animals, and reptiles.

1:24—Therefore, they were delivered over by God to (act out their) thoughts produced by their burning desires to continually let their bodies be degraded by one another.

1:25—Who exchanged the truth about God for a lie (or “the true God for the false god”4), not only falling into adoration of but also reverentially serving the created material realm of nature, contrary to the Creator, who is praised (by His handiwork in creation) endlessly. Amen.

If people could not recognize workmanship in living things, or if the things’ functioning abilities fell outside human experience, how could we tell if they were designed? This text’s central point is that all people—scientists included—can recognize the features of workmanship when they see them. Engineering principles pervade human workmanship and explain why it works. It’s people’s experience with this that leaves them without excuse for not crediting God’s agency as the cause of the features of handiwork they can also clearly see in nature. Everyone should credit God for the craftsmanship revealed in living things.

God’s Agency or Chance and Necessity

The Bible isn’t setting up a false dichotomy when it contrasts humans giving credit for nature’s origins to the Creator’s agency versus giving it to the created realm itself. The contemporary and exclusively non-supernatural worldview—broadly defined as “materialism” by the online Merriam-Webster Dictionary5—believes that nature should be credited with self-creation, as depicted in Romans 1:21, 23, and 25. Materialism contends that matter and nature’s material properties (or “the cosmos” and “the environment”) are the ultimate cause of everything. Explanations constrained to these material causes and effects are called naturalistic.

How do materialists credit nature with self-creation? For the material universe, theoretical physicist Stephen Hawking claims, “Because there is a law such as gravity, the Universe can and will create itself from nothing….Spontaneous creation is the reason there is something rather than nothing, why the Universe exists, why we exist.”6 To the materialist, life itself is also due to the natural outworking of chance and natural law.7 Edward O. Wilson of Harvard contends that “if humankind evolved by Darwinian natural selection, genetic chance and environmental necessity, not God, made the species.”8

Evolutionists credit nature with law-like creative powers based on their belief that it somehow selects for traits just like human breeders might breed dogs or horses. God’s true agency is exchanged for false projections of agency, such as volition, onto unconscious nature. Intelligent Design theoretician William Dembski aptly sums up:

Thus according to Darwin, nature itself constitutes the supreme animal breeder that shapes the path of life. In particular, necessity, in the form of natural selection, and chance, in the form of random variation, are said to account for all biological complexity and diversity.9

In Genesis 1:21, the Lord created, as it’s translated, “life” (Hebrew nephesh), a characteristic of animated things that has eluded being scientifically reduced to basic biology or explained by engineering principles. Entities with life have an attribute distinct from machines. However, the Lord Jesus’ handiwork in forming biomolecular, physiological, and anatomical functions that are commonly shared by humans and animals is not mysterious. His handiwork is “clearly seen” because people see and correlate it to the problem-solving handiwork produced by human agency. Thus, using the engineering principles that underlie how human-designed things adapt to changing environments to explain how organisms also self-adjust to these changes may not be just a helpful adjunct to research but a necessity to ensure accurate explanations.

The next article in this series will discuss the importance of recognizing the telltale design elements of workmanship in man-made things and applying those principles to explain the function of creatures. That same correlation also has implications for biological research. 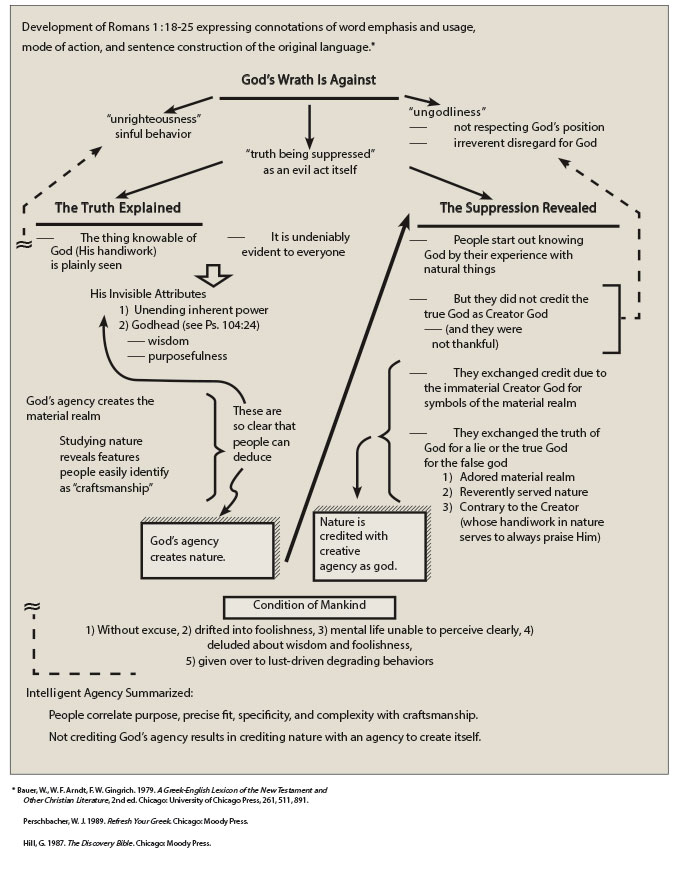