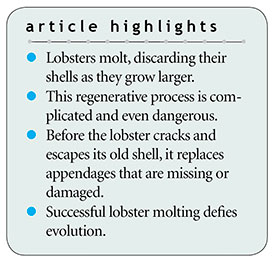 Have you ever dreamed that you were squeezing yourself out of a giant toothpaste tube as the tube slowly tightened around your body? Something similar happens to lobsters,1,2 so it’s more of a living nightmare for them. Lobster molting would end in sudden death if God hadn’t provided a solution to their predicament of constantly outgrowing their shells.

Lobster molting is a valuable display of God’s glory as our Creator, since God has carefully and cleverly bioengineered lobster molting so purposefully.3 Additionally, the process of molting, with its vulnerable shell-shedding phase called ecdysis, illustrates the implausibility of lobster life cycles somehow bumbling and stumbling into successful biomachinery programming through purposeless evolutionary accidents. 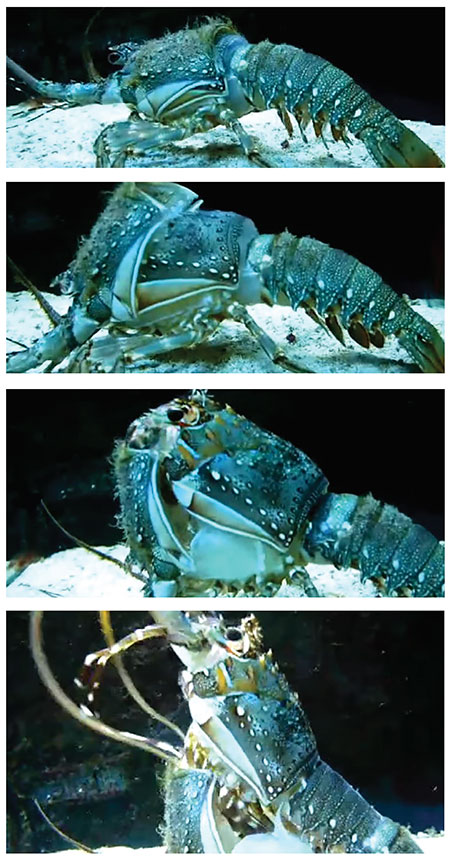 Consider the overall molting process, all of which must work successfully or the lobster quickly dies.

In its simplest terms, molting in crustaceans is the periodic shedding of the hard outer covering, the old exoskeleton, or shell. But this concept is overly simplified, because shedding an old shell requires the prior laying down of a new soft one under the old and, subsequently, the hardening of the new one into a firm, resistant, useful outer covering. The term molting, then, implies a large amount of physiological activity both before and after the actual shedding of the old shell.1

The molting lobster must break his old shell before he can squeeze himself out. Once out, his body needs to pulse with quick “growth spurts” and then harden the new cuticle before he is gobbled up by a hungry codfish!

Timing is critical because a new soft-shell cuticle must be ready under the old shell to replace the discarded one. Also, an exiting lobster must trigger its exoskeleton breakout at the right location, between its carapace (a helmet-like shell part) and abdomen, from where it can escape.2

To force this “do or die” breach, the lobster exerts inside pressure against a seam that joins the carapace to the shell segment below it. To prepare for shell rupturing, lobsters absorb extra water.

Body swelling through water uptake appears to be a key step in all accounts of crustacean moult, beginning about one h[our] before ecdysis and completed by 2 h[ours] after it. In lobsters, the animals increase their body weight by approximately 10% and this increase is entirely accounted for by the uptake of water. The increased hydrostatic pressure is essential for loosening and lifting the carapace before ecdysis can occur.2

The molting process accomplishes more than just accommodating new size requirements. Prior to ecdysis, the lobster replaces amputated limbs with ones fitted for the successor shell. These new limbs are activated when the old shell is shed.

At [the proecdysis stage] the animal starts to regenerate new limbs in place of those that it may have lost since the previous ecdysis.…Although before ecdysis the shell of a decapod crustacean may be battered, worn, cracked, faded, and otherwise in poor condition and the animal may lack vitality, after ecdysis the new shell is handsome, with bright pigments and healed wounds.1

Moreover, female lobsters are designed for additional multitasking during this vulnerable process since they mate immediately after ecdysis. Then the female lobster’s mate guards her until her new cuticle hardens.4

The process of lobster molting involves other amazing details, but these suffice to debunk the notion that lobster life cycles originated from evolutionary accidents. Molting is an all-or-nothing adventure—either do it right or die.4

Only God could have designed lobster life cycles so that they work, repeatedly and successfully.

Only God could have designed lobster life cycles so that they work, repeatedly and successfully.5