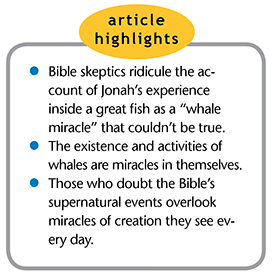 A skeptic once opined about the so-called problem of miracles, saying that “enlightened” thinkers doubt the Bible’s supernatural events such as “the whale miracle.” But which whale miracle did he reject? Was he thinking of Jonah being swallowed at sea yet living to tell the tale of the “great fish”?1 Some assumptions need examination because there’s more than one whale miracle to consider.

What was miraculous about Jonah’s experience? Some say the miracle was God’s preservation of Jonah’s life while he was inside the beast, comparing this to how Christ miraculously defeated death after His crucifixion. In fact, the Lord Jesus Christ compared His own death, burial, and resurrection to Jonah’s miraculous adventure.2 Surely God is powerful enough to accomplish both feats in three days.

Others, reviewing details of Jonah’s adventure (e.g., use of the Hebrew word sheol), suggest that Jonah actually died inside the animal, so they think the miracle was God’s restoration of Jonah’s mortal life.3 Obviously, the resurrection of a human swallowed by a whale is a miracle that skeptics would quickly shy away from.

But what other whale miracles are there to consider? Could miracles be hidden in plain view?

Well, the very existence and activities of whales are miracles that began on Day 5 of the creation week and continue today.4 Consider these basic facts of blue whale (Balaenoptera musculus) biology. These whales have sensitive underwater hearing that detects other whales’ wailing and screeching songs from miles away, thick blubber that insulates their vital organs from cold seawater, blowholes that open to receive oxygen and close when submerged, and a “floating” rib cage that prevents lung collapse when they’re deep-diving.4

Female blue whales birth live young in ocean water and nurse the babies from recessed mammary nipples with pressure-ejected milk. Male blue whales’ internally located testes have a countercurrent cooling system that protects their procreative paternal potency (ability to reproduce). Both males and females have flexible vertebral joints to enable their tail movement, and their tail flukes are controlled by a system of tendons and muscles.4

Blue whales use front flippers for maneuvering in ocean water. When water gets into their mouths, their “enormous tongues…press the water out of their mouths between the [baleen] whalebone lamellae, thus filtering the water and retaining the minute organisms” they feed on such as krill.5 And many more amazing design details make whale life possible for every whale in the world.4-6

Our skeptic friend questioned biblical events because of their miraculous nature, yet he was overlooking the many miracles of creation that surround him. For those with eyes to see it, every whale is a miracle of God, showing God’s power and bioengineering genius. No wonder David Coppedge said this about blue whale wonders: “The more details you learn about living things, the less excuse you have to chalk it up to evolution.”7

Jungle-Covered Ruins May Hold Surprising Hints
The ancient and elaborate temple at Angkor Wat is not the only interesting site to see when visiting Cambodia. Archaeologists have been discovering...
BY: BRIAN THOMAS, PH.D.

North Pole Dinosaurs Point to the Flood
Eight species of dinosaurs were recently unearthed in the Prince Creek Formation of northern Alaska.1 The latest discovery, published in Current...
BY: TIM CLAREY, PH.D.
More Back to Genesis
The Latest
NEWS   ACTS & FACTS   PODCASTS