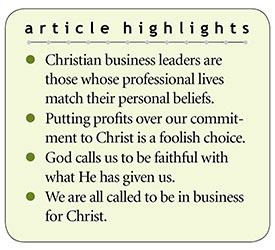 I recently received an Easter card. On the front, an empty tomb is pictured with the text of Matthew 28:6: “He is not here; for He is risen, as He said.” The card is signed by Phil and Sharon Drake and the principal officers of the Drake Software Company. Drake is a family-owned business that happens to be one of the largest, most respected professional tax software providers in the nation. What makes this card unique is these Christians’ boldness to use their business platform to honor the Lord—a seeming rarity these days.

My background is business, and I love to study the lives of Christian business leaders, those whose professional lives match their personal beliefs. Like all of us, they have their flaws and challenges, to be sure, but their business philosophies and testimonies are quite compelling. I’ve chosen just five to share with you, some from the past, some from the present.

John D. Rockefeller, Sr., founder of the Standard Oil Company and once the richest man in America, was also a Sunday school teacher and trustee of Erie Street Baptist Mission Church. He studied the Bible daily. He made a lot of money and gave away a lot of money. He said, “Every right implies a responsibility; every opportunity, an obligation; every possession, a duty.”

R. G. LeTourneau revolutionized the earthmoving equipment industry and was widely credited for aiding America’s effort during World War II. He supported numerous Christian causes and served as President of Gideons International. He also committed to “reverse tithe”—giving 90% of his income to God and keeping 10% to live on! He said, “I shovel [money] out, and God shovels it back…but God has a bigger shovel!”

David Green, founder of the Hobby Lobby arts and crafts stores, was the driving force behind the Museum of the Bible in Washington, D.C. As an accomplished businessman, he said, “There is a God, and he’s not averse to business. He’s not just a ‘Sunday deity.’ He understands margin and spreadsheets, competition and profits.”1

Norm Miller is the chairman of Dallas-based Interstate Batteries. He gives God credit for dramatically changing his life. In 2008, he launched the I Am Second movement, which became a powerful platform for evangelism. He says, “As I got more successful in the business and people knew I was a Christian, I started to get more involved in speaking. I decided I would just give my testimony and try to lead people to Christ.”2

You may know men and women in business whose witness is much like these five—the Lord has sprinkled these lights across the country. Christians in business helped make America great and contributed to its ethical and moral underpinnings.

They learned from the Scriptures that God desires us to seek contentment and avoid strife in our business dealings, and that diligence and generosity in our business affairs often lead to success. But they also learned that success can lead to pride, so we must be careful to keep the perspective that all our blessings come from God and not from ourselves. The Bible cautions against dishonest business practices, and we must not use our positions to oppress others.

Conflicts between faith and business rise to the top when money and special interests are involved. And sometimes we have to pay the price for our convictions. No one knows that better than Jack Phillips, owner of Masterpiece Cakeshop in Lakewood, Colorado. In July 2012, due to his Christian convictions, he declined the request of two men to create a wedding cake to celebrate their same-sex “marriage.” Phillips was hauled before the Colorado Civil Rights Commission and has been subjected to over five years of litigation. He awaits a ruling from the U.S. Supreme Court on whether he is free to exercise his freedom of conscience by declining to bake a cake!

A fascinating account in Acts 19 centers around a man in the city of Ephesus named Demetrius. He had a lucrative business making miniature silver shrines of the goddess Diana as objects of worship. He was successful and influential by the world’s standards. Unfortunately, his business and his wealth were built on a lie—the lie of a false god.

When the apostle Paul showed up in that city, revival broke out. “God worked unusual miracles by the hands of Paul” (Acts 19:11). Many Ephesians repented and some even brought their magic books and false idols and burned them.

In response, Demetrius called a meeting of the silver guild and declared an emergency. Their business was being threatened by the gospel Paul preached. Paul was persuading the people to abandon their idols, “saying that they are not gods which are made with hands” (Acts 19:26). For Demetrius and his cohorts, truth was secondary. Their driving issue was “We’re going to lose money!” A riot broke out and confusion reigned.

We have different gods today—and different goods and services. But the core issue is the same, and it forces us to make a decision: Do we choose business profits or the truth of the gospel? In today’s world, profits usually win that argument. That’s why abortion and pornography are big, profitable industries!

But putting profits over our commitment to Christ is a foolish choice. Judas Iscariot made the worst business deal in history. He sold out His Lord for 30 pieces of silver.

Even though we may not have the resources of a Rockefeller, God calls us to be faithful with what He has given us.

After working in corporate finance, I began financial planning and counseling for individuals. It’s something I love and feel called to.

In both these arenas, I’ve observed people from all walks of life. Some struggle financially while others have large bank accounts. Yet, I often see a common thread among them—emptiness, a lack of purpose, greed, fear, anxiety, a lack of discipline, a lack of confidence, no joy, no peace. And most frightening, no assurance of their future.

To cope, they pursue more wealth, more power, more debt, more everything! Many deny there’s a problem. But none of these things satisfy the real need of people.

I grew up in a rural community in a solid and loving churchgoing family. By man’s standards, I had everything I needed. But I was lost, and when I was seven the certainty of death became real the moment I lost my grandmother.

A few weeks after her sudden passing, my pastor came into the Sunday school classroom of our little country church. He asked us to pay close attention for a few minutes. He opened the Bible and explained that we were separated from God by sin regardless of how good we were (Romans 3:23). Death was the penalty for our sin (Romans 6:23; Hebrews 9:27). God knew this was unavoidable and provided a way for Jesus Christ, His Son, to die in our place (Romans 5:8). He died out of His deep love for us so we could have eternal life with Him—even after we die (John 3:16). Finally, our pastor told us that God does not force Himself on us but rather extends His invitation to us to follow Him and accept His gift of salvation (Romans 10:9, 13). I accepted that gracious invitation, and at seven years of age I became a Christ-follower. That turned out to be the most important decision of my life.

Like everyone, my life has had its ups and downs and times of rebellion. I have had to ask forgiveness many more times since becoming a Christian than before. But God’s hand of protection has been on me. He’s given me all I need. He’s given me a sense of purpose. Death is no longer a concern for me. I share the same apprehensions that anyone else does as that day approaches. But I have Jesus’ promise in John 11:25: “I am the resurrection and the life. He who believes in Me, though he may die, he shall live.”

The salvation God offers is the same for all. We must all come to Him in humility, repentance, and faith for salvation.

I was aware of ICR founder Dr. Henry Morris’ ministry for years. I knew he was a scientist and a strong defender of biblical creation. That was enough to draw my wife, Linda, and me to the Genesis class taught by his son, Dr. Henry Morris III, when it began in our church, First Baptist Dallas, in 2007.

After covering the first 11 chapters of Genesis, the class continued by popular demand, and in the process I have grown to love Dr. Morris, the whole Morris family, and the ministry of ICR.

In 2009, Linda and I went on an ICR creation tour to Yosemite National Park where we received an in-depth field education from a creation worldview from experts in geology, hydrology, and biology. Soon after, I completed ICR’s Creationist Worldview course. Somewhere along the way, I began advising the ministry on investment management. I ultimately joined the ICR board in 2011.

Even though we may not have the resources of a Rockefeller, God calls us to be faithful with what He has given us. I’ve chosen to invest my time, energy, and resources into God’s Kingdom through ICR because creation ministry is so important. Creation is important because, first of all, God’s Word presents it as truth—not just in the opening chapter of Genesis, but from cover to cover. Second, I am convinced creation offers the best scientific explanation for the universe, including how it came to be, how it is sustained, and why it is the way it is.

I’ve chosen to invest my time, energy, and resources into God’s Kingdom through ICR because creation ministry is so important.

For anyone willing to commit the time, the study of God’s creation is an enormous confidence builder when it comes to answering any question concerning the Bible and the Christian faith. That’s why I’m anxious to see the opening of the ICR Discovery Center for Science and Earth History. I want each of my 17 grandchildren to gain their own confidence that what God says is reliable. I know the discovery center will be instrumental in fulfilling that goal.

Jesus asked a penetrating question in Mark 8:36: “What will it profit a man if he gains the whole world, and loses his own soul?” That is a fitting question for every businessman and businesswoman. The answer, of course, is nothing. The person who would do so, like Judas, is a fool. So, how will you invest in His Kingdom? And what will your profit be? We are all called to be in business for Christ.

* Dan Farell is a board member and trustee at the Institute for Creation Research, as well as a member of First Baptist Dallas. He owns Farell Financial Advisory Services in Dallas, Texas.