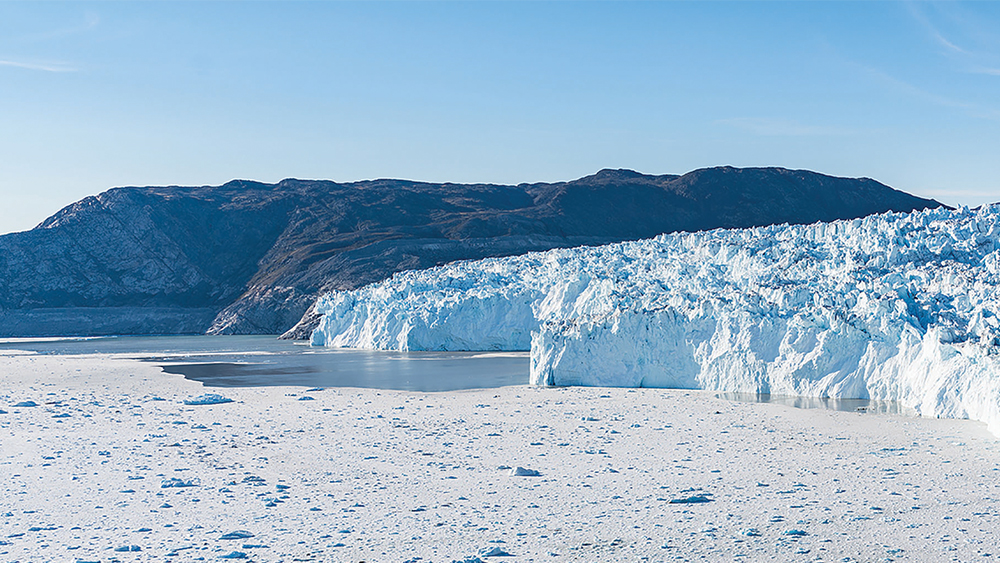 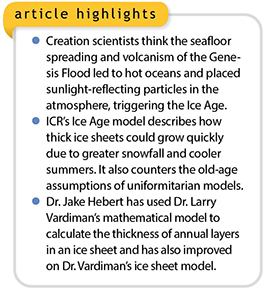 With ICR’s new focus on biology, my current ice sheet research is wrapping up. So, now is a good time to summarize the results so far.

Creation scientists argue that there was only one Ice Age and that it was triggered by the Genesis Flood. Heat from rapid seafloor spreading during the Flood greatly warmed the world’s oceans. This significantly increased evaporation, which resulted in heavy snowfall on mountains and at high latitudes. Explosive, sulfur-rich post-Flood volcanism placed sunlight-reflecting aerosols in the stratosphere, causing colder summers. This prevented snow and ice from melting, allowing quick growth of thick ice sheets.

This theory solves mysteries that still puzzle conventional scientists. It explains how millions of woolly mammoths could thrive in Ice Age Siberia and what caused their extinction.1 Creationists have answered the claims of uniformitarians and Bible skeptics that deep ice cores demand an old age for the earth.2 Heavy Ice Age snowfall, predicted by our Flood/Ice Age model, would allow thick ice sheets to form in just hundreds of years.

Uniformitarian scientists use theoretical models to assign ages to ice at various depths. However, these models completely ignore the time needed for a thick ice sheet to form, treating the ice sheet’s height as constant. This makes the mathematics much easier, but ignoring the time for the ice sheet to form is a source of error in the model. Uniformitarians feel justified in ignoring this time because it’s very short compared to the millions of years they believe the ice sheets have been in existence. So, these models implicitly assume long ages.

In the early 1990s, ICR scientist Dr. Larry Vardiman developed a basic mathematical model for the rapid formation of a thick ice sheet.3 It allowed the ice sheet height to change over time and assumed heavy Ice Age ice accumulation that gradually tapered off in the centuries after the Flood. I recently wrote a computer code to calculate the thicknesses of annual layers in Vardiman’s model.4 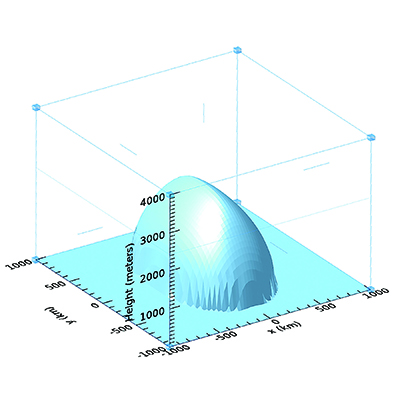 Figure 1. Output of a computer model simulating the rapid post-Flood growth of an ice ridge over 4,500 years. Height is exaggerated for clarity. (Image credit: Jake Hebert)

It’s also possible to use this model to simulate the rapid growth of a long ice ridge (Figure 1). I’ve done so and submitted a paper for publication.

This computer code can conceivably be modified to take uneven bedrock terrain into account, as well as up-and-down movements of the underlying bedrock caused by the weight of the overlying ice. A limitation of this model is that it treats every part of the ice as having the same temperature, which isn’t true in real ice sheets. Doing so would require more sophisticated computer models, which do exist.5

For readers who would like to read my original technical papers, all but the most recent are freely accessible under Publications/Technical Papers/Past Articles on the ICR.org main menu. We’re also in the process of constructing a new exhibit at the ICR Discovery Center that will highlight some of these discoveries. We hope you come pay us a visit!6