North Korea is a secretive country that threatens to attack its neighbors with missiles if provoked. It spends most of its limited resources on weapons and military personnel, which results in starvation for many of its citizens. Kim Jong-un, the 29-year-old son of Kim Jong-il and grand-son of Kim Il-sung, the original leader of North Korea, inherited the mantle of leadership and title as Supreme Commander of the military in December 2011 after the death of his father. He reaffirmed the intention of his country to continue its prime mission of military development. North Korea has rejected all attempts to reconcile with South Korea or to end its nuclear ambitions. 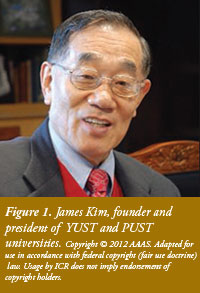 Yet, God moves in mysterious ways. James Kim (Kim Chin-kyung), a Christian citizen of South Korea and the United States and honorary citizen of China and North Korea, founded the Yanbian University of Science and Technology (YUST) in the Yanbian Korean Autonomous Prefecture of northeastern China in 1992. Kim crossed the border between China and North Korea for several years ferrying donations of food and clothing to North Korean orphanages. During one such trip in 1998, he was arrested as an American spy and imprisoned. He was convicted and sentenced to death. But leaders in North Korea were so impressed by his last will and testament in which he donated his organs for medical research in Pyong-yang, North Korea, that six weeks later he was released and given permission to freely enter and leave the country as he wished. 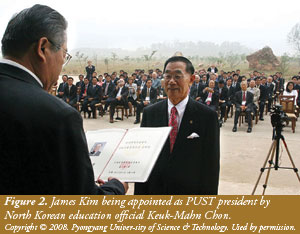 And then an incredible event occurred in 2001,when North Korea gave approval for Kim to build a technical university in North Korea similar to YUST. The new university, Pyongyang University of Science and Technology (PUST), was dedicated on September 16, 2009, and began offering classes in October 2010. Kim was appointed president of the new university.1 The first group of 160 undergraduate and master’s students was chosen by the North Korean government, selected from the top North Korean colleges, and chosen from political and military sponsors. The university currently has about 275 students and eventually plans to have a student body of about 2,500 and a faculty of 250, with classes in public health, architecture, agriculture and life sciences, electrical and computer engineering, and construction engineering. 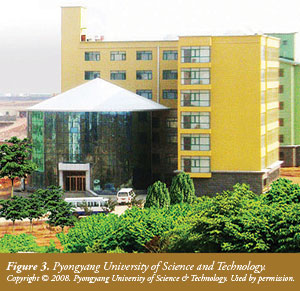 The $35 million, 240-acre campus includes a faculty guesthouse, world-class dormitories, a cafeteria, and classrooms. Laboratory equipment and computers are still limited in the school. But students and faculty rely heavily on computers to scan the Internet to do their research in place of laboratories. Classes are taught in English, and Internet access is available to all students, although it is censored. The school has its own backup generators, but fuel has to be trucked in from neighboring China because so little diesel and gasoline is available in the North.2,3

All students take English before entering the school, but they are required to study an additional year to sharpen their language skills before starting one of the three programs currently available—Agriculture and Life Sciences, Electrical and Computer Engineering, and International Finance and Management. The master’s program takes two and a half years, plus English.4,5

Almost the entire faculty of 25 are Christian. However, no Christian proselyting or even explicit religious discussions are permitted at the school. There is no campus chapel at the university, and there are no plans for one in the future. But neither are there any official portraits of the North Korean leaders, Kim Il-sung, Kim Jong-il, or Kim Jong-un, which hang in every other school and public building in North Korea. The primary influence on the students comes through personal relationships developed with the faculty. Exposure to Western technology and thought will affect the entire country in the future because the students will eventually become the top economic, political, and military leaders of North Korea. 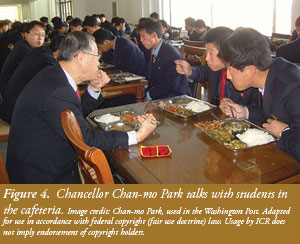 Dr. Wesley Brewer, head of the Electrical and Computer Engineering Department at PUST, is a part-time associate and contributor to the MENDEL and CLIMATE projects at the Institute for Creation Research. During the fall of 2011, he taught courses in Parallel Computing, Web Programming, and Data Structures. Homework assignments are completed on personal computers functioning alone or networked together. Dr. Brewer is looking for additional faculty to assist in teaching and directing thesis projects. He hopes to have his students conduct research using Mendel’s Accountant applied to medical research. Mendel’s Accountant is a computer package originally developed at ICR that tracks genetic mutations in organisms.6 Previous studies with Mendel’s Accountant have shown major problems with conventional evolutionary theory and support a recent creation model. It would be incredible if students in North Korea were to develop new theories and applications that are consistent with Scripture. 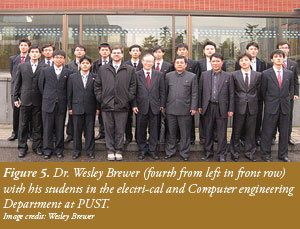 One of the school’s founders, Park Chan-mo, described the development and opening of the school as “amazing and kind of a miracle.” The New York Times noted that “[PUST] was largely financed by contributions from evangelical Christian groups in the United States and South Korea.” Dr. Park commented, “Many people were skeptical, but we’re all Christians. We had faith.”7

Dr. Park, the former president of the prestigious Pohang University of Science and Technology in South Korea, said the university project could not have been completed without the approval of the United States government. Officials of the school, eager not to run afoul of international sanctions in place against the North, have even sent its curriculum to the U.S. State Department for review.

One request from Washington was that the name of the biotechnology course be changed for fear that it might be seen as useful in developing biological weapons, Dr. Park said. So the course title was changed to “Agriculture and Life Sciences.” The United States government was also very sensitive about young North Korean scientists learning skills that could be used by the military or in developing nuclear weapons, but Dr. Park said, “We can’t be fooled into teaching them those kinds of things.”8

North Korea, while reluctant to expose its citizens to the outside world, has been seeking foreign investment for its decrepit educational system. For their part, evangelicals, who have antagonized the North by encouraging defections and assisting refugees after they cross over, are seeking a foothold inside the churchless state. It is exciting to watch God at work in North Korea.