Recently, the ICR Column Project team presented their research at the Geological Society of America’s (GSA) annual meeting in Phoenix, Arizona. Over 5,500 people representing 44 countries attended the four-day event, which is the largest gathering of academic geologists in North America.

The ICR team participated in both the oral and poster presentations. Our oral presentation, which had 60 to 70 in attendance, focused primarily on the Sauk and Tippecanoe Megasequences. The traditional secular sea level curve shows a pronounced rise in sea level then of about 300 meters—almost 1,000 feet (Figure 1).1

Using our new findings, we argued that this part of the curve fails to reflect the true nature of the stratigraphic data across the continents.2 We pointed out that contrary to what has been taught in geology classes for many decades, the Sauk and Tippecanoe have the least extent and volume of all six megasequences. In fact, their limited extent and thickness suggest that only minimal continental flooding occurred during their deposition. 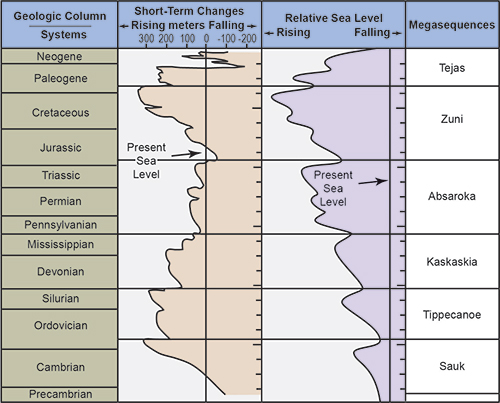 Our poster presentation showcased the results of our recently completed column study across Europe. Many conference attendees appreciated the continental-scale study of 499 columns since few geologists conduct such macro-scale research. Although we didn’t directly mention the global Flood described in Genesis, the evidence was there and spoke for itself.

The research also offers implications that have great bearing on the Flood/post-Flood boundary issue for creation geologists.3 Our basal Tejas rock-type map across Europe shows that marine limestone comprises the majority of the deposition around Turkey, Syria, and Iraq. Recall, the Tejas represents the Tertiary strata.4

Assuming the Ark landed in eastern Turkey (the mountains of Ararat) as the Bible says, it’s clear from our mapping that the Flood couldn’t have been over during the early Tejas, the sixth megasequence. The rocks from the basal beds upward are mostly limestones, salt beds, and other marine rocks. These data show the floodwaters were still present during the deposition of the Tejas through at least the Miocene around Turkey, North Africa, the Middle East, and much of Europe. Rock data clearly show the Flood hadn’t fully drained off the land around Turkey until after most, if not all, of the Tejas strata were deposited.

Our research offers significant evidence for a single rise in global sea level, not the multiple rises and falls taught for decades. We look forward to more opportunities like this to showcase our research.