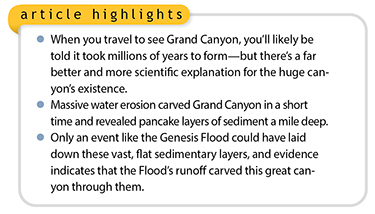 Grand Canyon carves a 277-mile-long chasm through northwestern Arizona. Running from Lee’s Ferry to Lake Mead, the expansive landscape reveals some of the most colorful geology in the world and provides strong evidence for the global Flood.

As you look across Grand Canyon, observe the layers on both walls. The cliffs and the colors match from one side to the other. The gaps between the cliffs were once filled solid, the layers continuous, but the space in between has since been removed by erosion. The bottom flat layers are older and were deposited first; these are called Cambrian system rocks. The youngest layers are on the canyon’s rim; these are identified as Permian system rocks. 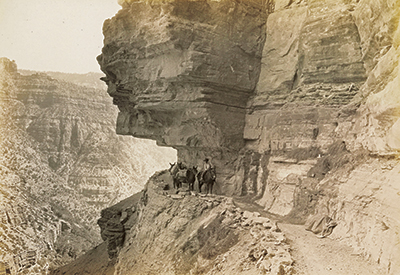 All of these layers were deposited during the rising phase of the global Flood. Powerful tsunami-like waves spread massive, continuous sedimentary layers for hundreds of miles in all directions across this part of North America. Even relatively thin layers extend across Grand Canyon.

Grand Canyon’s layers are like stacked pancakes. The lowermost flat layer at Grand Canyon is called the Tapeats Sandstone. At about 200 feet thick, it makes a thin, dark brown layer from a distant view. This layer represents the first extensive Flood deposit at this location. The basal boundary of the Tapeats is a special type of unconformity1 called a nonconformity, where sedimentary rock resides on top of pre-Flood crystalline rock. This surface is also referred to as the Great Unconformity (Figure 1). 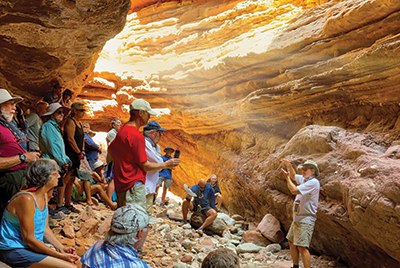 This global phenomenon is found in countless locations where Cambrian system sedimentary layers overlie Precambrian crystalline rocks. Just below the contact, we observe metamorphic crystalline rocks that are oriented nearly vertically, but the overlying Cambrian Tapeats is horizontal. Although secular geologists claim the Precambrian rock surface here experienced over a billion years of erosion, the contact with the Tapeats is almost perfectly planar—it’s flat! Where are the gullies and chasms from billions of years of erosion?

The Redwall Limestone is Grand Canyon’s most prominent layer—a red, thick, vertical cliff that spans the middle of the exposed rock layers. It’s part of the Mississippian system. Right below it, the Muav Limestone of the Cambrian system appears a bit more grayish. The evolutionary narrative claims 160 million years of erosion occurred between these two rock units. But where are the v-shaped channel patterns that gullies and canyons should have carved on top of the Muav? Instead, one flat limestone lies flat on another nearly everywhere you look. 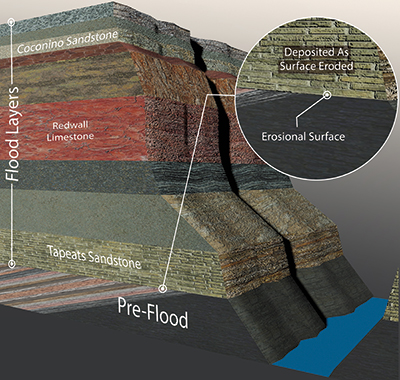 Figure 2. Flat contact shows no erosion and thus no time between the deposition of the Muav Limestone (gray) and the overlying Redwall Limestone (red). The inset shows the Great Unconformity.
Illustration by Scott Arledge

A third flat unconformity lies between the Coconino Sandstone and the Hermit Shale. If you look toward the top of the layers in the canyon, you’ll see a thin, light, tan-colored cliff on top of a dark red layer. About a million years of erosion supposedly separates these two units (Figure 2). But if they were really deposited millions of years apart, valleys and canyons should be found between each of these layers. Instead, the contact is almost perfectly flat everywhere we see it.

By examining the topography of areas that have been catastrophically restructured recently, we can estimate the effects of the Flood and compare that estimation with Grand Canyon’s topography. A mudflow following the 1982 eruption of Mount St. Helens created a steep-walled, 140-foot-deep canyon system, complete with side canyons, in a single day.2 It looks remarkably like a 1:40 scale of Grand Canyon.

And we see similar deep gorges and butte-and-basin (badlands) topography associated with the flooding that followed the bursting of Ice Age Lake Missoula. This occurred about 4,000 years ago in the American Northwest. Even secular geologists now recognize that this catastrophic megaflood created the Channeled Scablands of eastern Washington and widened the Columbia River Gorge.

Today’s processes do not form broad, flat rock layers or carve such big and clean canyons. Different processes must be responsible—catastrophic processes. Therefore, it’s reasonable to conclude that early floodwaters laid down Grand Canyon rocks while the water was rising, and the receding floodwater carved most of the Canyon.

The present narrative for Grand Canyon’s formation is insufficient. Most of today’s secular scientists assume the Colorado River slowly carved Grand Canyon over a period of six million years. But today’s flow rates simply don’t have the power to push the 1,000 cubic miles of rocks and debris all the way out to the Pacific Ocean. Even after millions of years, we should see a lot more talus and debris. Talus refers to rock piles that lean against the cliff walls where they fell. The canyon’s base looks like it was swept clean. Only catastrophic water flow and water volume many times greater than what flows there today could sculpt badlands topography and wide gaps in the canyon.3 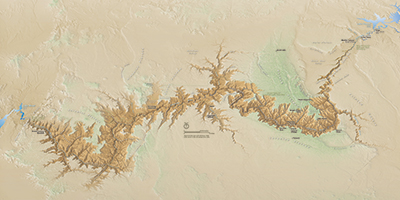 Secular interpretations still cannot adequately explain why the Colorado River cuts right through the Kaibab Uplift that formed on the western flank of the Colorado Plateau. The Kaibab Uplift has warped an arch of rock about 3,000 feet above the surrounding terrain. Water should have flowed around it, not uphill and through it.4

How do Flood geologists explain this? The year-long Flood narrative in Genesis helps us understand what we see. After sediments like the Coconino, Redwall, and Tapeats were deposited in the rising phase of the Flood, the Colorado Plateau was pushed up 5,000 feet during the receding phase of the Flood. This caused the floodwaters to drain off rapidly. Grand Canyon is on the western edge of that plateau. When packed, wet sand is lifted up, it stretches and cracks. Water naturally follows the cracks and fractures. Some of those would have run through the Kaibab Uplift to create a path for lots of water to flow downhill and carve a vast canyon.

Rapid uplift and drainage of the receding floodwaters provide both the pathway and the necessary volume of water to quickly carve Grand Canyon.4 This was all accomplished before the Ice Age began. How do we know? Because there are about 150 lava flows that originated on the Uinkaret Plateau and poured down into Grand Canyon during the Ice Age. The canyon had to exist before these lava falls poured in.5

The lateral extent of the sedimentary layers, flat contacts between the layers, and vast badlands topography all point to rapid deposition and ultra-high-volume erosion. The rocks reveal the enormity of the global Flood, and the canyon exhibits catastrophic carving from receding floodwaters. Grand Canyon is a reminder of the immense power of the judgment of the Flood.