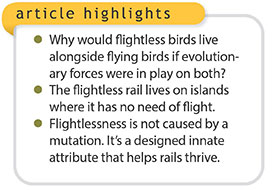 Jesus is amazing! He is also brilliant and glorious. It can be difficult to find the right words to describe Him. Earth is absolutely filled with His brilliantly designed life—everywhere. Environments can be vastly different, and what we call inhospitable or harsh can be a happy home to some specifically designed creatures.

Birds use their God-given ability for flight to literally crisscross the planet. Some seasonally migrate to locations with abundant food sources, while others stick it out as permanent year-round residents.

Since birds can travel so easily, why don’t they all find some lush place in the tropics and just stay put? God tells us why not in Genesis 1. He designed and built these animals to fill Earth, and that’s just what they do. Some live in the lush jungles of the world, while others choose to live full-time on small islands in the middle of nowhere. 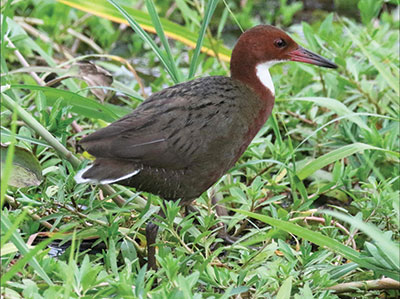 One such bird is the white-throated rail. Years ago, this rail flew to a small island and then did the unthinkable—it became flightless! Flight is such an incredibly beneficial ability to possess. Why would any bird ever give it up?

Many believe this bird didn’t become flightless by design. They surmise instead that a random genetic mistake disabled it, and flying birds were at a competitive disadvantage to survive, thus populating the island with flightless birds only.

How do you eliminate only the birds with the extremely beneficial ability of flight? These selectionists believe that strong winds blew most rail that still had usable wings out to sea and killed them. By mere chance, this left more rail that can’t fly on the island. Next, these ground-bound birds bred with each other and reproduced only flightless rail. This “wind wipe” happened repeatedly year after year until eventually the weather and death are credited with “designing” a new flightless species of rail.

But this explanation is a fanciful story. One reason stories like these are concocted is to try to find a way to credit nature rather than God for designing creatures. Why would anyone repeat a story this improbable given that multiple generations of birds with wings live alongside flightless rails on the same windblown island?

This modern-day faith in Darwin’s concept of natural selection obscures the truth and the creativity of Jesus. Death does not design; Jesus does. Unfortunately, creationists sometimes come along and repeat this make-believe story. I used to believe and teach others these selection-based views. I unknowingly attempted to harmonize Darwin’s thinking with the Bible by acquiescing that “selection” happens but no new information is added to a species since the change occurs in only one direction—with a loss of information.

Both of these assertions are misleading. Change doesn’t happen in only one direction. Many new features and capabilities can be added to a created kind of animal. This is because nothing is really being added to or subtracted from the genetic information. What is happening is radically different from Darwin’s ubiquitous anti-design scenario of random mutations filtered by mystical “selection events.” Molecular biology now informs us that sensors and information already within the organism switch genes on and off—sometimes thousands at a time—based on predetermined limits via epigenetics.

Genetically speaking, perceived losses or gains appear to happen when two types of one kind crossbreed, or hybridize. The hybrid doesn’t gain all of the genetic capabilities from the two parent types, but it doesn’t make anything new either. The capabilities had to be placed there by God from the start of creation.

But this isn’t what’s happening in the case of the rail. Rails live on islands right next to many types of flighted birds. The wind doesn’t appear to affect the flying birds. The fact is we often find flighted and flightless birds living together. Birds are designed with magnificent creativity and variety. They don’t all have the same wing shape, head, beak, body mass, talons, behavior, etc.

In this case, a crucial distinctive is that birds don’t all have the same basal metabolic rate, or BMR. Rail can vary their metabolism in a powerful way that drastically reduces energy requirements for living.1 Flying rails migrate to an island and can then switch to a full-time island-living lifestyle. Many drastic changes take place, and even their body temperature can be 10 degrees lower than a flighted bird. Their heavy breast muscles used for flight can consume 32% of total daily energy used, so they’re reduced in size. Their wings and related muscles are also reduced. They have fewer offspring, and general behavior characteristics slow down.

All of these changes have been observed repeatedly with rail. The changes make them flightless but allow them to remain on the island year-round. Other birds can fly off if food becomes seasonally scarce. Not the rail, though. It’s designed by the Lord Jesus with systems in place that make it the perfect ground-dwelling bird. Flightlessness is not a mutation, and it’s certainly not designed by wind.

Another bird ability that also contributes to the confusion of bird flighlessness is wing size variation with altitude.2 Often, wing lengths of birds vary based on the altitude where they live. For example, birds that live in the Rocky Mountains have offspring with a longer wing than ones found at sea level. A longer wing is ideal for lower air densities at high altitude but less efficient at sea level.

So, birds have built-in sensors and systems to optimize wing bone length to altitude. Evolutionists mistake this ability for the source of flightlessness.3 They extrapolate this capability far forward to apply it to the rail. Their selectionist interpretive framework leads them to miss seeing data indicating that flightlessness is a purposefully engineered innate response to conserve energy.

Rails are engineered to be flightless if needed so they can thrive on a faraway tiny island and thereby fill the earth just like Jesus designed them to do.