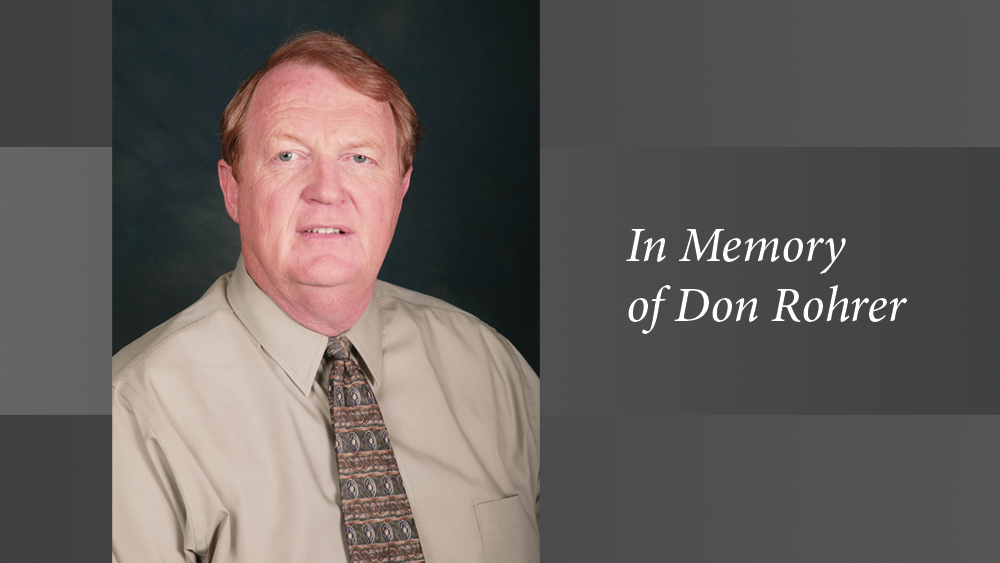 I first met Don in 1995 while applying to be an ICR speaker and scientist. With a big smile, he grabbed my hand and squeezed it as he introduced himself.

Through the years, whenever I’d call him he’d always answer the phone saying, “Don Rohrer, may I help you?” From there, he would do whatever he could to assist me. For example, one morning Don was giving me a ride to pick up my car. As we chatted, I mentioned I lost my pair of special sun glasses and couldn’t find a retailer that sold them. Before I could finish my story, Don was on his cell phone tracing down a vendor and giving me the address.

Don and Cheri were blessed with rambunctious sons who were constantly getting injured. Sometimes it required a trip to the emergency room in El Cajon. Don joked that he paid enough ER bills that the hospital was going to open a new wing with his name.

I will never forget a smiling Don Rohrer would come by ICR staff offices in mid-December, dropping off large, expensive hams and wishing us a Merry Christmas.

Henry Morris IV gives a wonderful summary of the work and person of Don:


As Dr. John Morris has said, “No Don Rohrer, no ICR.” As testament to this, I know my grandfather had only one pre-set number labeled on his phone—that was Don Rohrer. And I saw this first hand on a few occasions while visiting his office in Santee—granddad would pick up the phone, hit the “Don Rohrer” button, and ask Don to do this or that—and it would be done.

From the stories I’ve heard from my grandfather, I know Don was absolutely instrumental in ICR’s early days. Don was first hired right out of Bob Jones University by Christian Heritage College as a staff accountant. When ICR broke away from CHC in 1980, Don followed my grandfather to help this new upstart ministry, not knowing if or how they’d make payroll the next week. While my grandfather was the well-known star, Don was the master executive behind the scenes who made ICR work. He had the well-earned reputation of being able to “squeeze blood from a rock,” particularly with our finances (which were flimsy, at best). Apart from God’s direct blessing, it was Don who enabled ICR to survive in those early years. And as granddad would often write in his year-end letters to our donors, “ICR finished the year ‘in the black’”—and that was a direct compliment to Don’s ability to manage the business side of ICR.

From stories I heard from my father, I also know that Don reluctantly had to retire early due to health issues. He had developed macular degeneration in his eyes, so the battled-tested accountant and CFO could no longer see the figures on his spreadsheets. As a retirement gift, Dad authorized ICR to buy him a new pickup truck. How Don could see to drive is beyond me, but according to his wife Cheri, Don loved that truck!

Undoubtedly, Don leaves behind a wonderful legacy of service to the kingdom of God. He will be greatly missed on Earth, but greatly welcomed in heaven!