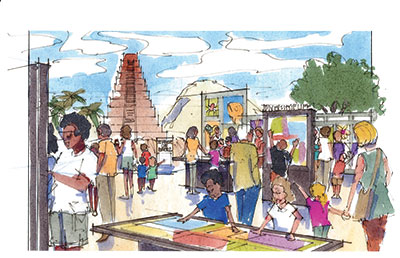 What would you expect to find in a science museum? Would you anticipate displays that praise God for His marvelous ingenuity? Would you envision scientific exhibits that illustrate specific biblical principles and refute naturalism? Would you expect to find the scientific method explained in terms of Christian theology? Many people would say, “Of course not! Those are religious concepts. A science museum should be about science.”

Science Is Not Secularism

One of the greatest myths of our time is that evolution and other secular ideas are somehow “scientific.” To bolster this claim, most science museums are actually evolution museums that mix real science with evolutionary stories about the past. Many people have been fooled by such claims and have dismissed the Bible as a collection of fictional stories.

In our culture it is fashionable to believe that science is opposed to the Bible. Supposedly, through objective scientific analysis we now know that the origin of the universe was far different from what the Bible describes. Therefore, a Bible-believing Christian is considered to be anti-science. In public classrooms, textbooks, and media we find biblical claims pitted against “scientific” claims: “The Bible says one thing, but science says something entirely different.” 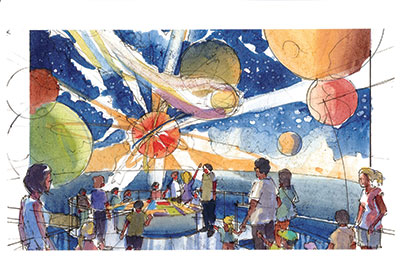 Many people might be shocked to learn that science owes its very existence to the Christian worldview. Science is not a specific position on origins or on the properties of the universe. Rather, science is a method by which we can test certain types of truth claims. By design, science enables us to discover patterns in nature through repeated observation and controlled experimentation. But why should we expect to find such patterns in a chance universe?

From the very first verse of the Bible, we learn that the universe did not originate by chance at all; it is a creation from the mind of God. The Scriptures teach that God controls and upholds the universe (Matthew 5:45; Hebrews 1:3) in a consistent way with patterns and cycles (Genesis 8:22; Jeremiah 31:35; Psalm 74:16-17). God made humanity in His image (Genesis 1:27), able to reason (Isaiah 1:18), and with sensory organs that reliably inform us of our surroundings (Proverbs 20:12). All of these are essential prerequisites to the scientific method. Yet there is no basis for any of these things apart from the Christian worldview.

If the universe were not designed or upheld by the mind of an omniscient, all-powerful Being, then why expect it to obey laws of nature? Why suppose that such laws would be consistent over time and space? Why would the universe obey simple mathematical relationships such as F=ma?1 If the human brain were the chance product of mutations, why expect it to be able to reason rationally? If our sensory organs were merely the result of mindless evolution, why presume that they are reliable? Yet, science requires all these things to be true. If the secular view of the universe were true, then there would be no reason to trust in the methods of science.

In light of these considerations, it is remarkably ironic that secularists claim their view is the “scientific” one when such a view would make science impossible. Even so, the psychological force of such rhetoric is powerful. If you want people to accept your secular belief system as truth, simply relabel it “science.” After all, science has allowed us to construct remarkable things, from computers and rockets to electric cars and smart phones. We rightly have some degree of confidence in the method of science. However, science is not secularism.

The campaign to convince people to believe in secularism by falsely equating it with science has been quite successful. Most science museums therefore contain a mix of truth and error. Genuine facts discovered by scientific procedures and unproven secular stories—like particles-to-people evolution, deep time, and the Big Bang—are presented together with no differentiation. These museums teach either implicitly or often explicitly that the Bible simply does not mesh with the findings of modern science, particularly in the area of origins. But make no mistake: Not only is science compatible with the biblical worldview, it is compatible with nothing else.

Wouldn’t it be nice to have a museum that shows how science confirms the Bible—one that demonstrates that the methods of science require the truth of Scripture? Just imagine displays that highlight the glory of God through what He has made and interactive exhibits that demonstrate how the evidence confirms biblical creation. At ICR, we are designing just such a museum. By God’s grace, it is our plan that the ICR Museum of Science and Earth History will show visitors how geology, astronomy, physics, and biology all confirm the history recorded in the book of Genesis.

But how do we present the truth of creation in a way that will engage the minds of young students? Interactive displays will captivate their imagination. One of our proposed exhibits will simulate a visit to any planet or moon in the solar system in ultra-realistic detail obtained from actual NASA data. From the breathtaking landscape of Pluto’s ice mountains to the stunning beauty of Saturn’s rings, students can virtually travel wherever they wish. They will see how the internal heat of Saturn’s moon Enceladus and the spiral structure of galaxies cannot last billions of years. Each journey will reveal something amazing about God’s creation, putting another nail in secularism’s coffin.

Imagine an interactive display where a student can explore the inner workings of a living cell and actively experience the astonishing complexity of the molecule-sized machines within it. He or she will see how each of these machines performs a function necessary for the survival of the cell. There will be no doubt that such an intricate creation is the handiwork of a truly awesome mind—not the product of chance. These molecular machines could not have come about in a gradual evolutionary fashion because they depend upon one another. It is one thing to read about this but how much more compelling to experience it firsthand! No rational person could walk away from such an exhibit thinking that evolution is true.

Every exhibit will be designed to teach some aspect of the biblical worldview in a way that is captivating. Visitors can play with a genetic recombination machine in which they see how sections of DNA from two parents combine to produce a child with unique DNA. Students can play this game again and again to see how many different traits (hair color, eye color, skin tone, and so on) can come from just two people. To students, this is just fun. Yet all the while, they are learning that genetics confirms what Genesis teaches—that all people descended from Adam and Eve. Yes, there is great variety in the traits that human beings possess. But the student quickly realizes that people can only beget people. Human beings lack the genetic instructions to produce anything else.

What about dinosaurs? The ICR Museum of Science and Earth History will have those as well. And visitors will see how dinosaurs confirm biblical history. They will learn that soft tissue has been found in dinosaur bones, indicating that dinosaurs lived in the recent past—not millions of years ago. They will see ancient depictions of dinosaurs produced by historical figures who apparently saw the living animals.

What about an ice age? How does it fit into biblical history? Visitors will learn how the global Flood of Genesis 6–8 triggered a post-Flood ice age. However, they will not just read about this on a sign. The Ice Age theater will virtually carry guests into the past and show them how the environment may have actually appeared during the Ice Age. Guests will see a depiction of the Tower of Babel, the confusion of languages, and the formation of ethnic people groups that followed. They will hear legends of the global Flood from many different cultures, confirming the real historicity of this event.

A state-of-the-art 3-D digital planetarium will transport guests into the cosmos, where they will explore the worlds of the solar system and far beyond. They will experience the bending of light by a black hole or see the various ways in which distant starlight could reach Earth within the biblical timescale. The digital nature of the planetarium will also allow for programs that are not astronomy-related. Guests may be treated to a virtual 3-D trip down the Grand Canyon to see how the global Flood deposited the surrounding rock layers. Or they might explore the inner workings of an atom. The possibilities are endless.

Most importantly, visitors of the ICR Museum of Science and Earth History will see how all of creation confirms that our Creator is also our Savior. The Lord Jesus Christ who made heaven and Earth, the very God we rebelled against in our sin, has taken our place on the cross and paid our penalty. He is willing to forgive and save all who will trust in Him. The museum will be masterfully designed and stunningly beautiful. And we pray that it will attract non-Christians who will see for the first time how science confirms Scripture. With the realization that the Bible is trustworthy, someone cannot ignore the gospel message. We pray that many will come to know Christ as their Lord and Savior.

The world needs a science museum that refutes the evolutionary myth and teaches the truth about science, all to the glory of the Lord. Will you partner with us to help make this museum a reality?