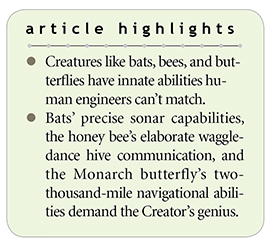 Bats are a remarkable example of God’s handiwork. Especially, their sonar capabilities put anything human-engineered to shame.1,2 These creatures appear suddenly in the fossil record in Eocene strata with no evolutionary precursors, and their fossils look just like modern bats. Bats are the only mammals capable of true and sustained flight like birds. In fact, they are even more maneuverable in the air than most birds are.

Bats use an incredibly complex form of echolocation to locate prey in the dark. As they zip through the air, they constantly emit and sense sound waves to accurately pinpoint the exact locations of moving targets, which they then snatch out of the air and eat completely “on the fly.” The variable sound pulses bats send out have been measured at 30,000 to 100,000 hertz (Hz).3 In comparison, the upper bound for human hearing is 20,000 Hz. This high-tech sonar is amazing enough, but bats also contain another very interesting piece of engineering. They would actually deafen themselves if it weren’t for a highly specialized inner ear muscle. This muscle contracts rapidly, repeatedly, and precisely to “freeze” the bone associated with hearing exactly when the sonar impulse is sent out. Then it relaxes at just the right time to receive the incoming sonar echo information from previous impulses.

This echolocational system is so precise that bats can use built-in neurological algorithms to intuitively process the ultrasonic sonar pulses to “see” their surroundings with sound just as well as people can see with their eyes! Some bats can even target and nab insects as small as a mosquito.

One aspect of honey bees that fascinates scientists is their eusocial (cooperative interaction) behavior, especially when it comes to locating food and other resources and then communicating that highly specific information to their hive mates on their return.4 When a foraging bee discovers a new food or water source, it flies back to the hive and conveys the exact coordinates of the resource through a high-tech waggle dance in a figure-eight pattern. The angle of the dance in relation to the sun confers the direction, while the amount of waggling confers distance and the general utility of the resource (e.g., food or water).

The hive mates surrounding the dancer bee also exhibit highly specific behavior that involves their distance and angle in relation to the dancer. An important part of their engagement in the information acquisition process is touching antennas with the dancer bee. Located in the bee’s antennas are highly specific, ultrasensitive mechanosensors that detect the information-rich dancer bee’s vibrations in a range of 265 to 350 Hz. Research has shown that the bees emit several different detectable chemical signals during the waggle dance as well. Sophisticated behavioral communication like this in a seemingly “simple” insect utterly defies evolutionary myth and glorifies our omnipotent Creator.

Monarch butterflies’ annual long-​distance migrations are yet another example of the Creator’s genius. These insects accurately navigate a southwesterly course on a 2,400-mile autumn trip starting from Canada and the northern U.S. and ending up in specific sites in Mexican forests.5 Part of this extraordinary journey can take the butterflies across hundreds of miles of open ocean in the Gulf of Mexico. The butterflies navigate the whole journey by continuously tracking data with their eyes on the horizontal position of the sun over the course of the day.

Researchers have also discovered the butterflies have a time-compensation clock located in their antennas to aid in decoding the sun’s movements in relation to time—also known as a circadian clock. In any man-made system, this would require complex sensors, computer algorithms, and hardware to decode and integrate the data as part of the overall navigation and flight system. God’s design in this small insect and other creatures puts man’s efforts to shame.