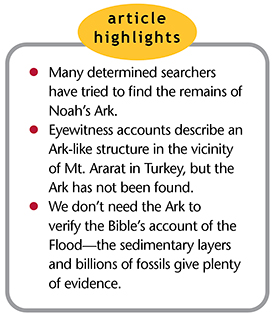 I recall a tough conversation with a skeptical student after speaking on creation and the Flood at a Christian school. This young man insisted he would never believe the Genesis Flood unless someone could show him Noah’s Ark. I tried to explain that such a standard of evidence is unreasonable considering the low likelihood of wood lasting for millennia. He refused to listen.

Would such an apparently stony soul take God at His Word if researchers found the real Ark? At least two factors keep serious Ark researchers primed for the hunt despite grave challenges.

First, the prize would be high. Noah’s Ark remnants would become the world’s oldest archaeological artifacts according to the Bible’s timeline. They would confirm biblical history more convincingly than even the Dead Sea Scrolls. 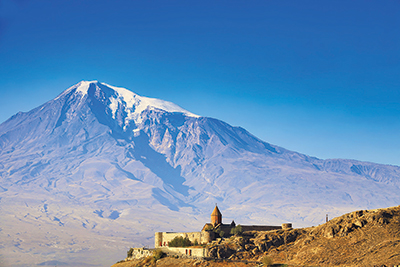 Second, 20th-century eyewitnesses independently described broken Ark-like remains in similar settings on Mt. Ararat in Turkey. A half-dozen reports describe Noah’s Ark remnants sitting on a ledge in a meltwater pond. Ed Davis’ account from 1943 has perhaps the most details. These accounts were the main reason ICR’s Dr. John Morris led a dozen expeditions to Mt. Ararat during the 1970s and 1980s. Those efforts returned tales of terrifying times but no Ark.1 Some speculate that high temperatures in the mid-20th century exposed Ark remnants that the ice has since covered.

Decades ago, explorer Ron Wyatt claimed that a boat-shaped feature was Noah’s Ark. ICR scientists reviewed the evidence and concluded it was instead a geological formation.2 A group of Chinese Ark researchers called NAMI claimed to have found Noah’s Ark in 2010. Those claims proved false after locals admitted to being hired to haul wood up the mountain to make a fake Ark for money.3

The 2015 film Finding Noah chronicled expeditions to the summit of Mt. Ararat leading up to 2014. It showed researchers using radar and drill cores to penetrate the ice cap. Although they found no Ark either, the film somehow buoys hope.

Then in 2016, a faction of Turks failed a coup attempt on President Recep Tayyip Erdoğan and his Turkish government. The aftermath led to a tighter Muslim grip and persecution of Turks and Christians. Ark researchers long to return but must wait until safer times. Even then, should explorers bother to go back?

ICR’s Dr. Tim Clarey suggests that Mt. Ararat arose after the Ark had landed.4 This geological consideration might disqualify Mt. Ararat as a likely Ark landing site, but it does not deal with the eyewitness evidence. Even if the Ark did land there, Mt. Ararat has been very active over its existence. Could remnants of a roughly 500-foot-long wooden box survive volcanoes, earthquakes, scavengers, and grinding glaciers?

These challenges dim, but do not douse, hope for an Ark discovery. Some locals point to the eyewitness testimony to justify their belief in the Ark on Ararat despite challenging arguments against it.

We don’t yet have Noah’s Ark, and it looks unlikely to turn up. But the good news is we don’t need the Ark to believe Genesis. We already have a world full of rock layers and fossils from the Flood.5 God has given us every reason to trust Him and His Word—even the parts about Noah’s Ark.