Many Christians are reluctant to accept the Bible’s clear teaching of a recent creation because they believe secular dating methods prove that the earth is extremely old. The apparent agreement between seemingly independent dating methods is seen as a powerful argument for millions of years. But closer inspection reveals that these methods are not truly independent, and the agreement between them is the result of circular reasoning.

Because secular scientists believe Earth’s sedimentary rocks were deposited over millions of years, they assume a given rock layer represents a “snapshot” of the history of life at a certain time in the “prehistoric” past. Since they also think some organisms lived only during certain periods of Earth history, they conclude that these fossils can be used to date different rock layers. For instance, suppose one particular organism has so far been found only in rocks thought to be between 200 and 180 million years old. If such an “index fossil” is found in a different rock of unknown age, secular scientists tend to assume that particular rock to also be between 200 and 180 million years old. In other words, the fossils found in rocks are used to date other rocks.

But how does one determine an age for the initial set of rocks? One might assume those ages are obtained either directly or indirectly from radioactive dating techniques. In theory, yes, but secular scientists have been known to reject such ages if they contradict the evolutionary story the scientists think the fossils are telling—even if the dates from multiple methods agree with one another.1 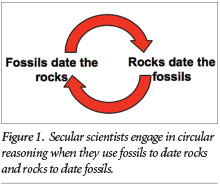 To study past climates, scientists drill and extract cylindrical rods of ice, known as ice cores, from the Greenland and Antarctic ice sheets. These cores can be thousands of meters long, and secular scientists routinely assign ages of hundreds of thousands of years to the deepest ice within these cores. However, creation scientists can plausibly account for the excessive ages assigned to these cores, as past articles have demonstrated.2-4

Likewise, scientists also extract long cores from the ocean floor. These cores are composed of sediments that have settled on the ocean floor over time. Because deep-ocean sediments are so thick, secular scientists assume they were deposited over millions of years. This might seem reasonable since sediments accumulate very slowly today. But there is good reason to suspect that the bulk of these ocean sediments were deposited in the last half of and very shortly after the global Flood of Noah’s day.5 Because of their belief that “the present is the key to the past,” however, secular scientists ignore these clues and assume that seafloor sediments have always been deposited very slowly. 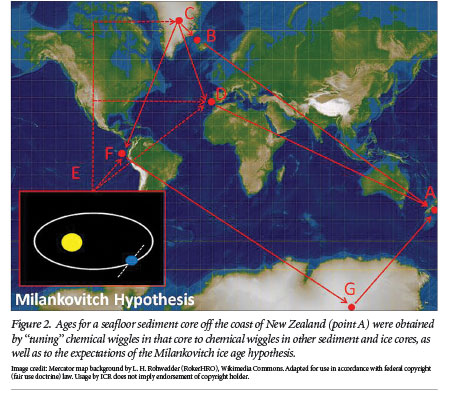 Secular scientists use the Milankovitch (or astronomical) ice age hypothesis to assign ages to seafloor sediments. Supposedly, ice ages are triggered by decreases in the amount of summer sunlight falling on the high northern latitudes. These decreases in sunlight are thought to be caused by slow, gradual changes in the tilt of Earth’s axis and the shape of its orbit around the sun (see the inset in Figure 2). They think this reduction in sunlight causes the high-latitude ice sheets to increase in size, resulting in an ice age. Later, when the high-latitude summer sunlight increases, the ice sheets supposedly retreat, resulting in a warmer “interglacial” period. Because secular scientists believe the solar system is billions of years old, they feel free to extrapolate these motions back millions of years into the supposed past. They then run the numbers and calculate the approximate times the ice ages supposedly occurred.

Chemical Clues in the Sediments 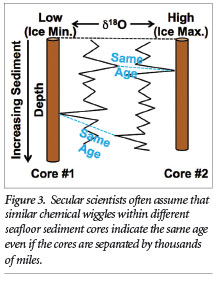 Many of these researchers believe chemical clues within both the seafloor sediments and ice cores tell a story of past climate change. In particular, they make measurements of a heavy variety, or isotope, of the oxygen atom, as well as measurements of a lighter oxygen isotope. They then calculate a quantity called the oxygen isotope ratio, denoted by the symbol δ18O. This quantity has been tied to presumed past climate values. If one plots these values on a graph, many “wiggles” are apparent at different depths within a sediment core (Figure 3). Within the seafloor sediments, very high δ18O values are thought to indicate the times at which Earth had the greatest amount of ice. Sediments containing these values are thus thought to have been deposited at times of maximum ice coverage. Likewise, sediments containing very low δ18O values are thought to have been deposited when Earth’s global ice cover was at a minimum.

Secular scientists use the Milankovitch hypothesis to calculate the times of past ice ages. They then either assign these calculated ages directly to a sediment core or indirectly by matching chemical wiggles in one sediment core with those in another core (Figure 3). Similar wiggles in one core are often assumed to indicate the same age as those within another core, even if the cores are located thousands of miles apart.

This process of tying wiggles in one core to those in other cores can be demonstrated by considering a 36-meter-long core designated as MD97-2120 that was retrieved off the eastern coast of New Zealand.6 This core’s location is indicated by the A in Figure 2. The core was divided into four sections, and a summary of the methods used to date the sections is posted online.7 Below is a description of the way scientists dated these four core sections.8

Secular scientists used the carbon-14, or radiocarbon, dating method to assign ages to the first section of the New Zealand core since the method is thought to be capable of dating carbon-containing specimens believed to be tens of thousands of years old. However, most people don’t realize these radiocarbon ages must first be calibrated. Even secular scientists often do not trust a raw radiocarbon age to give the true calendar age of a specimen. In this case, the scientists used a “marine calibration data set” to convert these radiocarbon ages into calendar ages. But this calibration data set was tied to tree rings, corals dated by another radioisotope dating method, and banding patterns called varves found within marine sediments.9 Moreover, this process involved many additional assumptions.

Dating of the Third Section

To obtain dates for the third section, researchers tuned chemical wiggles in the New Zealand core to wiggles in a sediment core extracted off the coast of Portugal (point D).11 But preliminary ages for the top of this Portuguese core came from another nearby sediment core, and more refined ages came from Greenland’s GRIP ice core, located near the GISP2 core (point C). But the ages for the deepest part of the GRIP ice core were tied to an ice core age model that assumed millions of years and that had been tweaked to agree with Milankovitch expectations (point E).

Likewise, the Milankovitch hypothesis was used to obtain the ages for the bottom section of this Portuguese core.

Dating of the Fourth Section

So, the general agreement between the ages assigned to different ice and sediment cores is not really surprising since the dating methods are linked to one another. Even so, the different methods still sometimes conflict.13

If the Milankovitch hypothesis were actually true, then one might argue that there is nothing wrong with tying chemical wiggles from one core to another. But there are good reasons to doubt this hypothesis. It is not apparent that subtle decreases in sunlight are sufficient in and of themselves to cause ice ages, and secular scientists do not have a clear explanation of how these subtle changes could be amplified to produce significant climate change. Furthermore, the hypothesis suffers from multiple other problems. And if the Milankovitch hypothesis isn’t true, then “wiggle matching” is really just a giant exercise in circular reasoning.

Wiggle matching is also problematic because seafloor sediment chemical wiggles are often obtained from the shells of free-floating organisms called planktonic foraminifera (forams). When these creatures die, their shells become part of the sediments accumulating on the ocean floor. The oxygen isotope values from these shells depend upon both the temperature and chemistry of the surrounding water at the time the shell was formed. Of course, there is no way to know these quantities, and secular scientists must make assumptions about the past in order to fill in the details. Likewise, ocean temperatures can vary dramatically due to differences in depth—remember, these particular forams float freely in the oceans—and local temperature changes may be totally unrelated to changes in worldwide climate. Therefore, it is very risky to tie chemical wiggles from one core to another core thousands of miles away, especially if the wiggles were obtained from the shells of planktonic forams.

Therefore, no Bible-believing Christian should be intimidated by the long ages assigned to the deep seafloor sediment and ice cores or by the apparent agreement between those assigned ages. Secular scientists simply assume evolution and an old earth and use those assumptions to ensure results that agree with their worldview. Despite constant claims to the contrary, deep core dating does not disprove the Bible’s history of a recent creation.