Darwin vs. Genetics: Surprises and Snags in the Science of Common Ancestry | The Institute for Creation Research
Skip to main content

For over 150 years, Darwin’s hypothesis that all species share a common ancestor has dominated the creation-evolution debate. Surprisingly, when Darwin wrote his seminal work, he had no direct evidence for these genealogical relationships—he knew nothing about DNA sequences. In fact, before the discovery of the structure and function of DNA, obtaining direct scientific evidence for common ancestry was impossible. Now, with online databases full of DNA-sequence information from thousands of species, the direct testing of Darwin’s hypothesis has finally commenced. What follows is a critical reevaluation of the four major lines of genetic evidence that secular scientists use to support evolutionary common ancestry.

One of the most commonly cited evidences for evolution is the hierarchical classification of life,1 which is based on anatomy and physiology. If evolution were true, then genetics should clearly reflect this pattern.

A brief examination of DNA inheritance shows the theoretical basis for this evolutionary expectation. When life begins at conception, DNA is transmitted through both the sperm and the egg, but the process of transmission happens imperfectly. Thus, each successive generation grows more genetically distant from previous generations as each new fertilization event contributes more genetic mistakes to the lineage.

By analogy, it’s as if a group of people were tasked with transcribing the text of a book and, in the process, made several errors with each transcription. If each flawed copy was used as the basis for the next copy, each successive transcription event would contribute more mistakes to the final product. Since the errors are cumulative, then comparing the number of mistakes between individual copies of the book would reveal which copies were transcribed earlier and which ones were transcribed later. Similarly, under the evolutionary paradigm, comparing the number of DNA mistakes between species should reveal which ones have a recent common ancestor and which ones have an older genealogical connection.2 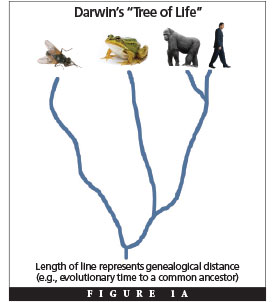 Darwin’s iconic “tree of life” embodies the sum of evolution’s relative predictions about species’ common ancestry (Figure 1A), and many genetic observations seem to support his hierarchical depiction of the genealogical relationships among species. For example, humans tend to share more DNA with the great apes than with frogs, and these species share more DNA with one another than they do with insects. This is consistent with predicted nesting of the human evolutionary branch within the primate branch of the tree of life and with the clustering of vertebrate species with one another but not with invertebrates on the tree.

These results would seem to confirm evolution. The problem? Numerous genetic patterns contradict this tree.3 In addition, for those patterns that do fit the tree, this result by itself demonstrates nothing about its validity. Why? Scientific tests must distinguish between hypotheses—supporting one while destabilizing the other—and the hierarchical pattern of life supports two hypotheses that are radically different. What hypothesis other than evolution predicts a hierarchical pattern? Design! Although some might protest that the design hypothesis does not explicitly predict hierarchies as a signature, empirical observations quickly put this objection to rest.4 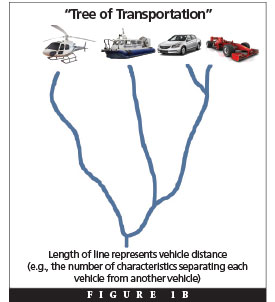 For example, consider the similarities and differences among major types of transportation vehicles. An Indy racing car has much more in common with a sedan (e.g., four wheels, movement restricted to land, etc.) than with a hovercraft. However, all three vehicles have more in common with one another (e.g., movement restricted to sea or land) than with a helicopter. Thus, a “tree of transportation” could be drawn without much effort by simply observing and classifying the products of design that surround us, and this tree would depict vehicles in a hierarchical pattern (Figure 1B).

At first glance, the design hypothesis doesn’t seem to predict exactly how many genetic differences should exist between humans and chimpanzees. However, the evolutionary hypothesis does. Since evolutionary progress ultimately occurs via imperfect inheritance of DNA, the accumulation of these mistakes over evolutionary time leads to precise expectations about the absolute genetic differences among species, and a match between these predictions and reality could strengthen Darwin’s case.

The third line of evolutionary evidence from genetics leads to the same conclusion. Since the mechanism of evolutionary change is based on genetic mistakes, evolutionists expect the genomes of certain species to be littered with useless DNA—essentially leftovers from the clumsy, unguided evolutionary process. Evolutionist Dan Graur and his colleagues make this clear: “Evolution can only produce a genome devoid of ‘junk’ if and only if the effective population size is huge and the deleterious effects of increasing genome size are considerable….In humans, there seems to be no selection against excess genomic baggage. Our effective population size is pitiful and DNA replication does not correlate with genome size.”9 Hence, evolutionists predict that the human genome should be filled with junk DNA.

The ENCODE project, a massive undertaking funded by the National Human Genome Research Institute, corralled a large amount of preliminary data that effectively refuted this hypothesis.10 In fact, the quote cited above comes from a paper written to dispute the conclusions of ENCODE—not because the experiments were flawed but simply because the project’s results were inconsistent with evolutionary expectations. The idea of a species having large amounts of junk DNA seems to be a relic of the past.

Evolutionists have further responded to ENCODE by citing organisms whose DNA sequence seems inexplicable apart from invoking junk as an explanation. For example, evolutionist T. Ryan Gregory coined the “onion test” as a challenge to claims of function for junk DNA.11 The essence of his test, which has been publicized by a prominent theistic evolutionist,12 draws on the fact that the onion has much more DNA than humans and that much of this DNA falls into the category of sequence previously labeled “junk.” Since humans are obviously much more complex than onions, Gregory sees no reason why the onion should carry around so much extra DNA.

This challenge is simply another example of the logical flaw that beset earlier claims of junk DNA. For Gregory to insist that creationists must explain the onion’s DNA reflects a fundamental misunderstanding of the argument. Creationists did not insist that all DNA was functional. Rather, evolutionists prematurely claimed non-functional DNA in the absence of laboratory evidence. No creationist explanation is needed until the onion’s DNA has been tested in the laboratory.13

Evolutionists have yet to demonstrate that junk DNA exists at the levels they expect to find in light of evolution, and this discrepancy effectively removes junk DNA as a line of evidence for evolution. In addition, this fact raises the question of whether all genetic differences arise via mutation. For example, one potential source of genetic differences that evolutionists regularly ignore is divine creation. In humans, modeling the common genetic differences as originating via creation rather than mutation explains the human genetic diversity data and leads to dramatically different predictions for the function of these DNA variants.14

Despite the weight of these preliminary findings, some evolutionists still cite what seem to be examples of junk DNA to support evolution. How well do these examples fare?

A prominent and persuasive-sounding example of junk DNA is the purported fusion site on human chromosome 2 where, supposedly, two ancestral ape-like chromosomes came together to form a single chromosome. Evolutionists have been repeating the fusion claim for years without actually examining the sequence closely. Dr. Jeff Tomkins’ analysis of this sequence reveals that the fusion is actually functional and bears little, if any, resemblance to the predicted fusion sequence.15 This means that one of the best lines of evidence for human-chimp ancestry has now become one of the biggest evolutionary challenges: If humans and great apes have a common ancestor, why do they have different chromosome numbers?

Other specific examples of junk DNA collapse under close examination as well. For example, small subsets of the 3,000,000,000 human DNA letters represent recognizable functional sequences called genes. A comparison of these genes to the remaining DNA letters in the human DNA sequence reveals the existence of pseudogenes. As their name implies, pseudogenes look like genes that once were functional but now are broken. Evolutionists have compared pseudogenes between humans and primates and found common sequences, a pattern that evolutionists maintain is best interpreted as evidence of common ancestry.16

An analogy to human language strengthens the force of this argument. For example, if two students submitted identical essays to their teacher, the teacher might suspect that one student copied his essay from the other. If the teacher also found that both essays contained numerous errors and that the errors occurred in the same paragraphs and sentences in both essays, her suspicion of plagiarism would grow stronger. The chance is miniscule that both students would just happen to make the same typo at the same location in each of their essays. By analogy, the chance is also miniscule that two different species would randomly have the same error in the same place in their DNA sequences, especially since the human and chimpanzee DNA sequences are each billions of DNA letters long. Therefore, if two species do share errors in the exact same DNA location (i.e., both have the same pseudogenes), then evolutionists maintain that these species must have “plagiarized” these mistakes from a common source.17,18

Darwin was completely ignorant of the biological role of DNA when he penned his theory a century and a half ago. Now the evolutionary case from genetics is unravelling at multiple levels because it was never based on any direct evidence for common ancestry in the first place. Do the evolutionists have any lines of genetic evidence left? Evolution fails to predict either the absolute number or the function of genetic differences among species. This is remarkable since the supposed “engine” of evolutionary change is the genetic mistakes themselves. If evolutionists can’t even get their fundamental mechanisms to line up with their models, then why do they continue to present Darwin’s grand hypothesis as fact?

* Dr. Jeanson is Deputy Director for Life Sciences Research and received his Ph.D. in cell and developmental biology from Harvard University.