The Creator's Glory Reflected Everywhere: True Treasure in the Cayman Islands | The Institute for Creation Research
Skip to main content

The Cayman Islands are famous as an offshore asset haven—huge amounts of wealth are stored there. Yet their greatest treasure is not the money stashed in private accounts, it is the islands’ natural assets that reflect God’s glory. Since glorifying God is the highest function for apologetics (1 Peter 3:15a), a proper accounting of God’s creation recognizes and reports its true value.1 God’s glory includes His priceless artistry, displayed in His natural creation. This reality is regularly sung by Caymanians in their national song, “Beloved Isle Cayman”:

O’ land of soft, fresh breezes, of verdant trees so fair
With the Creator’s Glory reflected ev’rywhere.
O’ sea of palest em’rald, merging to darkest blue,
Whene’er my thoughts fly Godward, I always think of you.2

How valuable is God’s natural creation? In this money-mad world it is easy to ignore—to miss out on—the wonderful beauty of God’s creation as we pass by its big and little treasures day after day. But how can you put a fair price on the true value of such fine art assets?

Such is certainly the case with the Cayman Islands and their salty sea breezes, coastal sunrises and sunsets (mirrored across the tidal waters), sandy white beaches (visited by frigatebirds and sea turtles), tropical flora, and specialized menagerie of marine and terrestrial fauna.

The ecosystem resembles a lavishly decorated tropical home, equaling even the best creative talent displayed in the most impressive showplace decor.3 These islands’ animals are artwork in motion, displaying God’s artistry. For example, the national bird, the Cayman Islands Parrot (Amazona leucocephala caymanensis), is brilliant green with bright blue under its wings and tail, a white forehead and bill, red cheeks, and golden-yellow claws. (A variant on Cayman Brac has a maroon belly.) The Cayman Islands’ unique blend of plants, animals, and physical environment provides the viewer with an interactive exhibit of God’s glory.

Even after Adam’s fall (and the earth’s curse) in Eden4 this miniature world of nature showcases mobile and multifarious beauty in its good-yet-groaning condition as it all awaits our Redeemer’s return to and ultimate renovation of this planet.5 Before our Lord returns, we should pause from time to time from our computer screens and our telephonic texting—long enough to weigh the worth of God’s natural creation. So, consider for the next few moments a few representative creatures of the Caymans as examples of “the Creator’s glory reflected everywhere.” 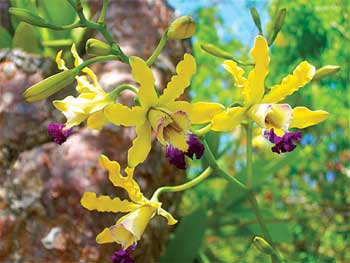 No less valuable are God’s landlubber animals that inhabit the Cayman Islands. Although no large land mammals are native to the Caymans, the islands are home to a large “super rat” called the Central American agouti (Dasyprocta punctata) which can be roasted or deep-fried and eaten (although this writer declined the opportunity some years ago).

The Cayman Islands’ name derives from a no longer populous crocodilian reptile called the “caiman” (Caiman crocodilus), the alligator-like member of the crocodile family known as the “spectacled caiman” today. Cayman ground dwellers also include many earthbound lizards (including the Blue Iguana and the Caymanian Anole), land turtles, tree frogs, and land crabs.

In 1503, the Caymans were named Las Tortugas (“The Tortoise”) by Christopher Columbus for the flourishing green sea turtles. For decades following Columbus’ Caribbean explorations, it was not uncommon for navy ships (from Spain, England, France, and Holland) to go “turtling” in the Caymans—stocking up on turtle meat in order to add some tasty protein to the sailors’ often monotonous diet. Turtles were flipped over to capture them, then hauled aboard ships and kept alive in water tubs until they were ready to be cooked and eaten. Sir Francis Drake recorded his visit in 1586 to the Cayman Islands, to acquire sea turtles for food-to-go, and observed that the islands also had edible reptiles called “Caymanas,” probably the Caiman crocodilus of today.6

Another reptile of Cayman forests is the Hickatee turtle (Trachemys decussate), which can breed successfully with Red-eared Slider turtles (Trachemys scripta), proving that these turtles both derive from common ancestors that disembarked Noah’s Ark some 4,500 years ago.

The Caymans’ most exotic creature (in this writer’s opinion), however, is the Caymanian Giant Land Crab (Cardisoma guanhumi), an ivory-to-gray-hued creepy crustacean that crawls through the Caymanian version of the Hinckley underbrush, hoping to evade its primary predators—hungry humans! Like other land crabs, its carapace covers its gills and contains blood vessels for extracting oxygen from air, using lung-like processes. Although they are land critters, they must migrate to and from the tidewaters of the seashore for breeding, with their larvae beginning their crustacean life cycles in tidal waters that in time wash them up on shore; they then live mostly on land.7

The Cayman Islands also serve as a hangar, hosting airborne creatures like birds, bats, and butterflies. These aerial wonders enjoy the smorgasbord of fruit, seeds, and other foods available in the Cayman forests, thick brush, farmed lots, grasslands, orchards, and wetlands. 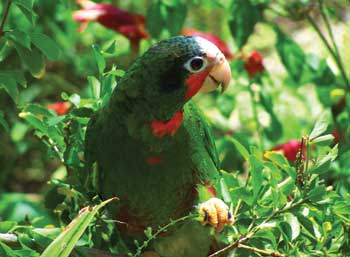 The butterflies of the Cayman Islands include the non-migratory Caribbean Monarch (which is orange, black, and white, like its North American cousin), Gulf Fritillary (white, black, and brown speckled), pumpkin-orange Julia, black-and-yellow striped Zebra, White Peacock (with patterns of gold and silver-gray, accented by black polka dots), indigo iridescent and golden-yellow Swallowtail, Sulphurs of white and yellow, and a variety of moths.8 Other bugs of the Caymans, either airborne or earthbound, include mosquitoes, damselflies, dragonflies, lacewings, aquatic bugs, beetles, ants, scale insects, cockroaches, and more.

The birds of the Cayman Islands include a diverse mix of the Grand Cayman Parrot, tanagers, woodpeckers, honeycreepers, Ching-ching grackles, Caribbean doves, mangrove cuckoos, Yucatan vireos, stilts, and herons, among many others. A photographic inventory of these avian beauties could document a subset of “the Creator’s glory,” clothed in feathers for all to see.9

The total portfolio of Caymanian natural wealth is shored up with a wet world cornucopia of coastal marine life, including green sea turtles, fish, shellfish, occasional beaked whales, dolphins, coelenterates (like jellyfish), coral, and others.

Green sea turtles (Chelonia mydas) continue to be recognized as marine assets in the Caymans, especially at the Cayman Turtle Farm at Boatswain’s Beach, where tourists may handle (but not eat) these squirmy reptiles at a conservation/hatchery facility. Incidentally, turtle soup is quite tasty, but you will not eat Caymanian turtle soup when you visit because the turtles are now protected by conservation laws.

Green sea turtles have an amazing God-given feature—an immunity to the powerful poison of the box jellyfish. Box jellyfish are self-propelled (unlike other jellyfish that passively drift with sea tides and currents) and have almost invisible, cube-shaped bells with dangling venom-exuding stinging tentacles that justify the nicknames “sea wasp” and “marine stinger.” Although most humans survive being stung, some die. Yet green sea turtles eat these jellyfish with impunity. They clear beach waters of the jellyfish, to the obvious benefit of humans. What would the tropical beaches be like if there were no “checks and balances” in the shoreline ecosystems?

This bird’s-eye view of the Cayman Islands’ true treasure shows specific examples of the Creator’s glory through the wonders that He made and maintains. The Bible teaches that it is our creaturely duty to rightly recognize God’s handiwork as the product of our Creator and to glorify and thank Him (see Romans 1:20-21). Yet many refuse to do so—they attribute the work of the Creator to the creation, an act of illogical idolatry.

The popular and often uncritiqued phrase “natural selection” is used in many idolatrous contexts among both evolutionists and creationists alike.10 But there is no “selector” in nature other than God Himself who chooses how to “fit” creatures to survive and thrive in this fallen world, so they can “be fruitful, multiply, and fill the earth.” Cayman Island creatures were fitted to live in their habitat by God, and He chose to give artistic beauty to the details of those big and small creatures.

Nature selected nothing to live or die in the Caymans. Every living Caymanian creature was selected by God, not by nature. God alone designed and equipped the software and hardware of those creatures, to fit them for life. He did this, as Genesis teaches, by creating their “kinds” in the first place, because there can be no survival of the fitted, unless and until there is an arrival of the fitted.

It is idolatry to ignore the divine Artist while appreciating His artwork. The Creator’s glory is reflected everywhere, including the Cayman Islands. God’s handiwork is exquisitely detailed fine art, truly priceless, to be treasured by all who have eyes to see.