Perhaps the most well-known triumph of catastrophic thinking over strict uniformity is that of Dr. J. Harlen Bretz and the “channeled scablands.” Beginning in the 1920s, Bretz studied the deep gorges of eastern Washington. He noted they were cut into hard basaltic rock and oriented in the same general direction. Small streams entering the gorges cascade over essentially dry waterfalls, accomplishing virtually no erosion. 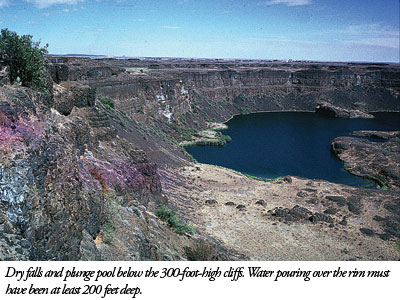 Standard thinking insisted that moving water operating over long ages was the only agent known that could so deeply erode through hard rock. But responding to the data, Bretz felt that an unknown high-energy event of the past must have been responsible. Great boulders had also been tossed about and now lie in boulder fields and gravel bars. For decades, Bretz presented his findings and his conviction that a single but mysterious great volume of water had devastated this area rapidly. But how?

He speculated that the “scablands” must have resulted from a huge flood—not the biblical Flood (shudder), but one of biblical proportions. Eventually, evidence of a now empty lake comparable in size to today’s Lake Michigan was discovered near Missoula, Montana. An unusual deposit consisting of extensive glacial lake sediments confirmed that a huge lake had been at this spot during the Ice Age. Somehow the lake had drained away. 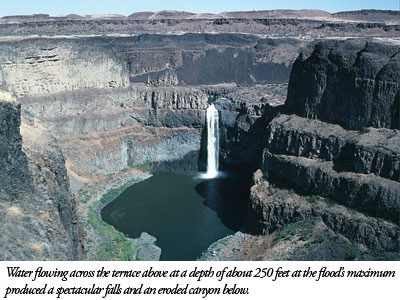 Bretz proposed that an enclosing dam of ice or glacial moraine had catastrophically failed, releasing torrents of water that flooded across Idaho and eastern Washington. It eroded the hard rock in its path and left deep canyons reminiscent of Grand Canyon, along with immense gravel ripples and boulder fields strewn across the landscape. When the waters were forced to temporarily pond behind ridges, they deposited extensive sedimentary layers of recently eroded material and then made their way quickly to the Pacific Ocean. Now the water is gone, with meager streams and “dry falls” entering the canyons—or “coulees,” as they are known—testifying to greater water volumes in the past.

Nothing like this happens today. No modern day “uniformitarian” counterpart can be observed on such a regional scale. Erosion happens, but it usually isn’t observed carving deeply into solid rock. However, scientists have discovered that water flowing over a rock surface at a rapid rate can erode even hard rock in a short amount of time. Water molecules moving quickly over rough surfaces form vacuum bubbles that actually “implode” with great force and fracture the adjacent rock, thereby accelerating erosion (a process called cavitation).

By 1960, Bretz had won the day and convinced geologists that, at least on this occasion, catastrophic processes had ruled. If this much damage resulted from a large but local failed lake flowing over a corner of the continent, what damage could be expected from the great Flood of Noah’s day?