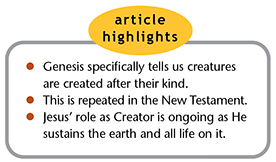 The opening chapter of Genesis makes a significant and scientifically accurate statement concerning the fixity of created kinds. During the creation week, we repeatedly read the phrase that every type of living thing was created “after its kind.”

While there is observable variation within plant and animal kinds, we don’t see one fundamental kind evolving into another, nor do we see any evidence of transitional forms in the fossil record. Interestingly, we see the Creator’s upholding of fundamental, creation-based principles reaffirmed in the Greek text of the New Testament.

In Colossians 1:16-17, we are given insight into the Lord Jesus Christ as the Creator: 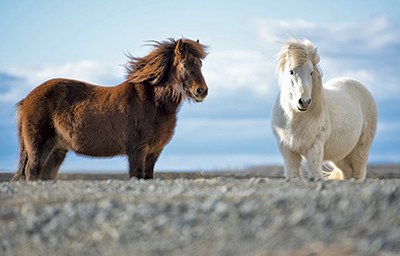 The Icelandic horse is one of hundreds of different breeds of the equine kind.

In the section of verse 16 stating “all things were created through Him and for Him,” the word for “created” isn’t a simple past tense form of the Greek verb to build or create, κτίζω (ktizó), but is inflected in the perfect tense as ἔκτιστα
ι (ektistai).1 This perfect tense verbal form conveys a deeper and much richer meaning in the Greek than can be conveyed in a quick English translation. In fact, the perfect tense was often used intentionally by Greek New Testament authors to teach important theological truths. Greek verbs in the perfect tense describe an event that occurred in the past with ongoing effects or activity continuing into the present. Even more fascinating is that this verb is also inflected in the passive voice, meaning that an external agent (God) is involved in the continuing perfective action upon His creation. Taking these key verbal constructions into consideration, we can see that an ongoing effect or action being enforced by an external agent is implied, going as far back as the original creation event. This idea expressed in the last part of verse 16 is even more fully elaborated in the connected text of verse 17.

In verse 17, let’s look at the phrase “in Him all things consist” (one translation says “hold together”), specifically focusing on the Greek grammar behind the English word “consist.” The lexical form of this verb is συνίστημι (sunistémi)2 and is actually a combination of two other Greek words: σύν (sun), which means “with,” “joined,” or “gathered,” and ἵστημι (histemi), which means to “set,” “stand,” or “establish.”

Various forms of the verb συνίστημι (sunistémi) are used in the New Testament in 16 places.3 Most of the time it’s used to reflect humans commending or establishing themselves in some way. For example, the apostle Paul used it a number of times to “commend” or establish himself to churches he addressed in his epistles. In several other places it is used to describe an active commending or establishing of God concerning some action directed toward His people (e.g., God commends His love toward us). Out of the 16 occurrences, the verb is used twice in the perfect tense. In one case, it’s used as a participle (verbal adjective) referring to an early phase of the creation week in 2 Peter 3:5. This example refers to how God positioned the earth to be established part “out of the water” and part “in the water”—obviously an act with an ongoing effect.

In Colossians 1:17, we find the other New Testament use of the perfect tense of the verb συνίστη&
mu;ι, where it is given as συνέστηκεν (sunestéken).4 By once again taking the key grammatical information of the perfect tense into consideration, we can see that sunestéken is a perfect description of God’s sustaining activity of what He initiated in Genesis 1 during the creation week. In regard to sunestéken in verse 17, Greek grammarian A. T. Robertson noted that “the word repeats the statements in verse 16, especially that in the form ektistai.”5 Not only is Christ Jesus the Creator, but He has, over the course of the world, been actively sustaining and upholding His creation.

God created all plants and animals after their kind according to genetic boundaries He set in place in the beginning. While the kinds contain genetic variability and innate mechanisms of adaption to diversify and fill the earth, they aren’t capable of morphing into something entirely different as claimed by evolutionists. Furthermore, God did not simply step back after creation as some indifferent bystander as claimed by deists. We are told specifically in Colossians that everything is collectively upheld and sustained by our mighty, sovereign God from the past creation event to the present—despite the entrance of humanity’s sin and the resultant curse it brought on creation (see Genesis 3 and Romans 8:18-22). In fact, we aren’t left hanging in this section of Colossians; further on in the chapter we are given the hope-filled promise in verse 20 of God’s plan “by Him [Jesus] to reconcile all things to Himself...whether things on earth or things in heaven, having made peace through the blood of His cross” (emphasis added).

God the Father, through His Son Jesus Christ, not only created the world and its biosphere but is sustaining and upholding it according to Genesis 1 principles and will soon reconcile this sin-cursed world to Himself.