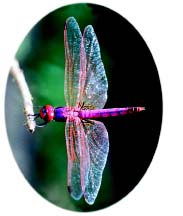 Evolution means change, but when we look to the living world, we see no significant change (macroevolution). Consider the troublesome creatures that Darwin labeled "living fossils." These are organisms that were supposedly extinct for many millions of years, only to appear in the twentieth and twenty-first centuries alive and kicking.

Australia is the home of a beetle discovered alive in 1998 but supposed by Darwinists to have been extinct for "200 million years." It hasn't changed at all. There are dragonfly fossils over "300 million years old" with wing venation virtually identical to dragonfly wings today. There is no change. Millipedes supposedly have been crawling around for "420 million years"! A fascinating plant example is the "150 million-year-old" Wollemi Pine discovered in 1994 and 2000 west of Sydney, Australia. One must ask: Is it logical to assume that a stand of trees can stay in one physical location for over 150 million years and not come to any demise? Those fortunate researchers obtaining permits to visit the secret location of the Wollemi Pine stands must first change clothes to avoid possible contamination of the trees with foreign bacteria, viruses, or spores. But why worry about contagion? The Wollemi Pine should be unbelievably hearty after all those millions of years. Random air currents and rains over the millennia should bring every kind of "bug" to infect these trees and their ancestors a hundred thousand times over.

Another young-earth indicator involves the degradation of organic compounds (i.e., protein) in a geological environment. There's no question, even among some evolutionary naturalists, that unmineralized dinosaur bone still containing bone protein resides in many locations throughout the world.1 This is amazing, and destroys the mantra of dinosaurs becoming extinct "65 million years ago." Simply put, bone containing such well preserved protein could not possibly have existed for more than a few thousand years in the geological settings in which they are found.

In August of 2004 the BBC News reported the North Greenland Ice Core Project (NGrip) recovering what appears to be blades of grass or pine needles from cores two miles below the surface. While allegedly several million years old, the possible organic matter suggests the Greenland ice sheet formed quickly.2

Creation biologists view the age of the earth in terms of only thousands of years. Living fossils, ancient "plant matter," and dinosaur protein are not a problem if the earth is young. Evolutionists on the other hand, must posit impossibly long periods of no evolutionary change when an "extinct" creature appears alive, and then make excuses why the creature never changed.