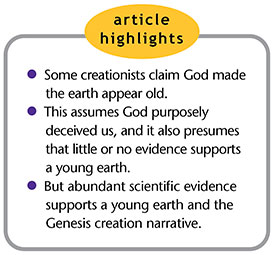 Some within the creation community make the claim that they would believe God’s Word about the age of the universe even if all the evidence pointed otherwise. Trusting God, no matter what, is certainly a good thing. However, then they claim that He intentionally made the universe “look old.”1 Did God make an old universe but describe a young one in Genesis just to test our faith?

A comparison is sometimes made between creation’s supposedly old features and Adam’s appearance of age, or the water that Jesus miraculously turned into wine. These creationists argue that these examples make it reasonable for God to have created the universe with the appearance of age as well.2 Should we expect that a creation spoken into existence would somehow look billions of years old? Young-looking features of our world dissolve arguments for its apparent old age.

If a person were given science tools but had no preconceived notions about the universe, would purely objective observations lead that person to believe in a billions-of-years-old earth and universe? By no means, since so many features look so young.3 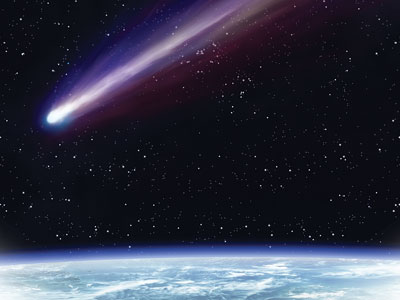 A close examination of the geologic column reveals sedimentation from a flood so recent that countless creatures it buried, including dinosaurs, have decomposing tissues that sometimes still stink.4 Mass spectrometers, chemical stains, and microscopes reveal original protein remnants in them. These results suggest burial only a few thousand years ago.

The objective, unbiased person would also understand a century’s worth of magnetometer results that show Earth’s magnetic field is fading fast.5 That looks young too.

Telescopes reveal comets in long orbits around the sun. These balls of ice follow orbits that every once in a while bring them close to the giant ball of fire. It would be like putting a snow cone half an inch from a space heater set on high. No wonder comets routinely fizzle in front of our eyes when they’re near the sun. They can’t last billions of years.6 Did God put them into the sky to make sure observers would know the creation isn’t very old?

We see many features that fade fast. Cliffsides crumble and mountains erode.7 The rate at which our DNA is mutating sets a limit on the human race as a whole.8 This mutation clock, if run backward from the present amount of DNA damage in our bodies' cells, indicates an age for mankind of only thousands of years.

Do features of this creation clearly show a universe that is billions of years old? Do Christians have to believe in recent creation despite mountains of contrary evidence? Quite the opposite. Instead, those who deny creation must believe in deep time despite both the world’s youthful features and the Word’s plain speech.