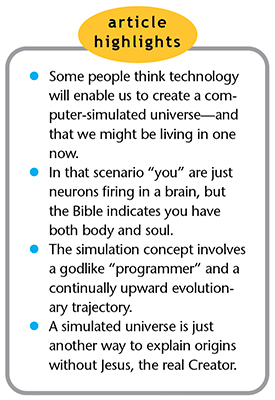 “The odds that we are in base reality is one in billions,” says famed inventor Elon Musk.1 He reasons that if humans continue the current trend of technological advancement, we’ll develop the ability to simulate a universe inside a computer, and perhaps we are all inside one today. A recent NBC News poll reported that 56% of respondents believed it was likely we’re in a simulated universe.2

Top groups like Google, MIT, and Oxford are all actively pursuing this technology. Oxford professor Nick Bostrom leads simulation theory and outlines how humans are developing technologies that integrate with body systems.3 In time, this will effectively cure disease and even prolong our lives. We also might use incredible processing power and artificial intelligence (AI) to either become superintelligent or create AI that becomes a superintelligent being that takes over. Futurists refer to this as the posthuman stage. In this scheme, such posthuman beings will decide to simulate human evolutionary history.

There’s one catch. Becoming posthuman implies that “you” are just a brain and that consciousness consists merely of neural networks. If so, then circuitry and code could replace your brain. Dr. Bostrom states, “It could be the case that the vast majority of minds like ours do not belong to the original race but rather to people simulated by the advanced descendants of an original race.”3

If we’re just brains, someone could build machines to simulate or become conscious beings that weren’t created by God. However, the Bible reveals you are more than neurons firing in a brain; you have both body and soul. Otherwise, Jesus wouldn’t have admonished His disciples, “And do not fear those who kill the body but cannot kill the soul” (Matthew 10:28).

Scripture is clear that it’s possible for your spirit to be out of the body.4 Since your brain is part of the body, then your brain is not “you.” Rather, it seems to be an organ that can function as an interface between the real you and your body. Even the best AI hardware with twice the synapses of the brain—complete with advanced software—will never become a human being. Earthly devices cannot simulate spirits. The simulation argument is over before it even gets started.

The simulation argument takes for granted the philosophy called materialism, which teaches that only the physical is real. Simulation proponents thus reject the idea that humans have an immaterial spirit. They conclude that a spirit wouldn’t be of this universe, yet they appeal to a server running outside of the simulated universe. By definition their imaginary server isn’t part of that universe and is therefore a supernatural server. The simulation argument is self-defeating.

The popular simulation concept exposes some of evolution’s inherently religious aspects. An upward trajectory of human development from single-cell organisms to posthumans merely extends evolution to the next step—we keep improving to become superintelligent, capable of writing the code to simulate an entire universe.

Whoever writes such a code would need to know how the entire universe works—i.e., have godlike intelligence and ability. Psalm 19:1 should then say the heavens declare the glory of—the programmer. An evolved human “god” replaces Jesus Christ as Creator, and Jesus becomes an unimportant part of the simulation past and not Creator God.

Some simulation proponents even describe a simulated afterlife of rewards for good works and punishments for bad behavior. How ironic—the evolutionary system designed to explain the origin of the universe without the Creator and touted as scientifically superior to all other systems ends up being just another works-based righteousness religion that turns humanity into God.

You are not mere matter. You have the breath of life given and sustained by God. What is reality? Jesus is the Creator of all things––including you.

* Mr. Arledge is Research Coordinator and Dr. Thomas is Research Associate at the Institute for Creation Research. Dr. Thomas earned his Ph.D. in paleobiochemistry from the University of Liverpool.