Are Hurricanes Getting More Destructive? | The Institute for Creation Research
Skip to main content

Hurricane Katrina which plowed through New Orleans in August 2005 comprised the most costly natural disaster in U.S. history. Not too many years earlier in 1992 Hurricane Andrew crossed through Miami and had claimed that distinction. But Katrina was quickly followed by Hurricane Rita, making 2005 the first time in history two category 5 hurricanes with sustained winds exceeding 155 miles per hour occurred in the Atlantic Ocean. Why have there been so many powerful hurricanes in the past few years? Is this a new trend or have we just entered a temporary new cycle of intense hurricane occurrence? Is recent concern over global warming legitimate and the recent number of hurricanes with such high winds a result of warmer temperatures?

A hurricane is one of the most powerful natural forces on planet Earth. The amount of energy output is comparable to that of an earthquake, a volcano, a tsunami, or a nuclear weapon. And like most geophysical events their occurrence is very difficult to predict. Their path from formation to landfall is quite irregular. Attempts to weaken or divert hurricanes away from population centers have been largely unsuccessful. Most research on hurricanes has been conducted to understand how they function and to document their intensity, frequency, and geographical distributions. We will attempt to report on some of the latest research results on Atlantic hurricanes and answer the question, "Are hurricanes getting more destructive?"

Tropical cyclones generally form between about 5o and 30o latitude in all oceans of the world except the south Atlantic and the southeast Pacific. They do not form directly over the equator because there is no Coriolis force at the equator (rotational effect caused by the turning of the earth) and the sea surface temperature (SST) is too cold at latitudes poleward of about 30o latitude. Tropical cyclones are called hurricanes in the Atlantic and typhoons or simply tropical cyclones in oceans other than the Atlantic. They form when the SST exceeds about 80oF and a disturbance in the tropical airflow causes a convergence of warm, moist air for a long enough period of time to permit a weak vortex to form and grow into a tropical depression. Tropical cyclones in the northern hemisphere form in late summer and fall following the extended period of summer heating with a maximum in September. In the southern hemisphere where summer is six months out of phase with the northern hemisphere, the maximum occurs in February.

Typically about 85 tropical cyclones develop globally each year, of which roughly half go on to become full-fledged hurricanes/typhoons. About 9 hurricanes on the average form annually in the Atlantic. Figure 1 shows the number of tropical cyclones which have formed each year in the Atlantic since 1851 with a maximum wind speed exceeding 39 miles per hour. These data were obtained from the Tropical Prediction Center and contain "best-track" adjustments which could influence the statistics, particularly for hurricanes in the 1800s and from 1944-1969.1 The maximum and minimum annual number of hurricanes was 21 and 1 in 1933 and 1914, respectively. There appears to be a trend in the annual number of hurricanes over the 153 years of data with an increase of about 1 hurricane every 30 years. The trend line shown in Figure 1 is the least squares regression line from 1851 through 2004.

This trend is in contrast to the conclusions of Landsea et al.,2 relative to the 50-year period from 1944 to 1994 in which they detected a decline in the frequency of hurricanes. The difference in conclusions for this new analysis is probably due to the addition of another 10 years of data with a higher average number of hurricanes (about 14 per year) and an analysis over a much longer period. It is evident from the full sequence of data that there are short-term variations in the frequency of hurricanes which could lead to misinterpretations. For example, between 1880 and 1900 and between 1945 and 1960 there appear to be short periods of high frequency. On the other hand, between 1910 and 1930 the frequency seems unusually low. So, it would be premature to assume the period from 1995 to the present will continue. However, the long-term trend of an increase of 1 hurricane every 30 years is well supported statistically. 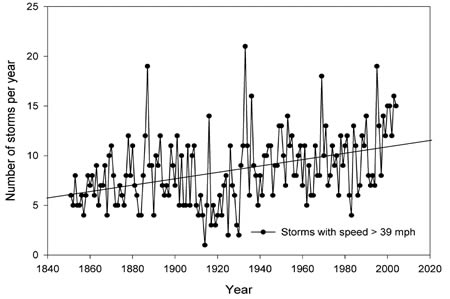 Figure 1. Frequency of Atlantic Hurricanes since 1851.

The suggestion by some that global warming caused by man's activities may be causing hurricane frequency to increase can't be proven from these data. The problem of tropical cyclogenesis is extremely complex and remains one of the great mysteries of the tropical atmosphere.3 It involves not just the growth of hurricanes after they have been initiated, but must also include the development of triggers in the atmosphere which form the incipient tropical depressions. These triggers may or may not be accentuated by warmer SSTs. In addition, any possible warming in SSTs may be a natural variation independent of man's activities.

The frequency of hurricane occurrence is not the only criterion by which destructiveness should be estimated. Emanuel4 has proposed a formula for calculating the power dissipation of a hurricane which includes consideration of the drag coefficient, the surface air density, the magnitude of the surface wind, the size of the storm, and its lifetime. Although the power dissipation calculation he suggested should give a good estimate of destructiveness, it is difficult to evaluate using historical data sets which seldom report storm dimensions. So, he simplified the calculation and proposed a substitute called the power dissipation index (PDI). It integrates the cube of the maximum wind speed over the lifetime of the hurricane and performs some smoothing.

Emanuel found that when the method was applied to Atlantic hurricanes his index more than doubled in the 30 years since the 1970s. This suggests that storms have become more intense, on the average, and have survived at high intensity for longer periods of time. Emanuel also applied his technique to other data sets. He found that the accumulated annual duration of storms in the Atlantic and western North Pacific combined has increased by roughly 60% since 1949, although this may partially reflect changes in reporting practices. The average annual storm peak wind speed summed over the Atlantic and the North Pacific has also increased during this period, by about 50%. Thus, both duration and peak intensity trends are contributing to the overall increase in net power dissipation. For fixed rates of intensification and dissipation, storms will take longer to reach greater peak winds, and also take longer to dissipate. Thus, not surprisingly, stronger storms last longer.

There seems to be evidence that hurricanes are becoming more destructive, due to an increase in frequency, intensity, and duration. This should be of concern especially to those who live in coastal communities. The historical record shows a lot of variation for short intervals in the past when large numbers of storms have occurred in some years and very intense, destructive storms have occurred in others. We may have been lulled to sleep between about 1970 and 1995 when hurricane frequencies and intensities were weaker than the average. However, hurricane destructiveness seems to have recently returned to a more normal level and may even be increasing beyond the long-term average. Of course, it doesn't help that during this same period, extensive development has occurred all along the coastlines. The landfall of hurricanes of the same frequency and intensity as 30 years ago would now produce a much greater loss of life and property than it would have then. If hurricanes are increasing in destructiveness, the problem becomes even worse.

Of course, we haven't answered the question as to why the frequency and intensity of hurricanes may be increasing. Such increases in hurricane destructiveness are consistent with warming of the SST. However, I am of the opinion that a possible small increase in SST is possibly due to a natural variation rather than a manmade effect. The ocean has many periodicities such as the 7-10 year El Niño/Southern Oscillation. The current detected trends could be the result of a similar, longer-period variation. This same variation could also be responsible for the measured increase in carbon dioxide in the atmosphere measured at Mauna Loa since 1958. A warming ocean will expel carbon dioxide from the ocean and increase the concentration in the atmosphere.

None of the small temperature changes discussed above compare to those which likely occurred after the Genesis Flood. It has been shown that the ocean temperature at the end of the Genesis Flood was likely as warm as 100oF or more.5 Such a warm ocean would be an explanation for the Ice Age because of the excessive evaporation of water into the atmosphere and deposition of snow in the polar regions and on mountaintops that would have occurred. An ocean with a SST equal to or greater than 100oF would also likely have produced large frequencies and intensities of hurricanes beyond anything experienced today. It has been shown that giant hurricanes called hypercanes would likely have occurred over major portions of the earth.6 They would have grown to hundreds of miles in diameter, produced horizontal winds of over 300 miles per hour, had vertical winds of 100 miles per hour, and precipitated rain at rates greater than 10 inches per hour. Large amounts of erosion of the unconsolidated sediments would have occurred on the continents following the Flood. In this context, today's increasing hurricane activity represents a minor oscillation in the steady-state condition at the end of about 5,000 years of cooling.

* Dr. Vardiman is Chairman of the Astrogeophysics Department at ICR and Chief Operations Officer.