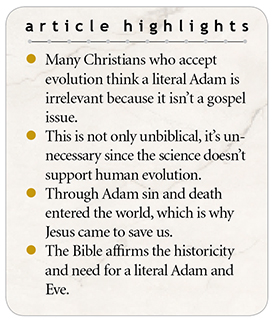 Was there a literal Adam? Does it matter? Many academics and even Christians claim humans descended from apes through an evolutionary process over millions of years. This contradicts the biblical account of mankind’s unique creation in God’s image about 6,000 years ago. A key problem with the evolutionary position is that there’s no evidence of an ape-human transition in the fossil record.

Australopithecus are ape-like fossils thought to represent the first precursor to the genus Homo, or human. However, nothing has been found to bridge the gap between the two groups. In a 2016 Royal Society paper titled “From Australopithecus to Homo: the transition that wasn’t,” two secular paleontologists state:

Although the transition from Australopithecus to Homo is usually thought of as a momentous transformation, the fossil record bearing on the origin and earliest evolution of Homo is virtually undocumented.1

Even the field of human-ape DNA similarity research has come up empty in this regard. Both creationists and evolutionists recently documented that the human and chimp genomes are no more than 85% similar.2 For humans and chimps to have evolved from a common ancestor over an alleged period of three to six million years, a 98 to 99% similarity is required. The scientific data from both paleontology and genetics demonstrate a chasm of discontinuity between humans and apes, a situation that is clearly on the side of the Bible’s account of human history.

Many Christians think they should not be overly concerned about the veracity of a literal Adam because it’s not directly related to the gospel of Jesus Christ. But this is simply not true. Not only are humans created uniquely in the image of God, but the story of a historical Adam is foundational to the gospel.

Through a literal Adam and Eve, sin entered the picture, along with death, misery, and corruption. This curse accounts for the central problem of evil in the world. Romans 5:12 says, “Therefore, just as through one man sin entered the world, and death through sin, and thus death spread to all men, because all sinned.” This foundational gospel truth is repeated in 1 Corinthians 15:22: “For as in Adam all die, even so in Christ all shall be made alive.” And the pervasive and disastrous effect of mankind’s sin on the whole creation is stated in Romans 8:21-22: “Because the creation itself also will be delivered from the bondage of corruption….For we know that the whole creation groans and labors with birth pangs together until now.”

The Lord not only confirmed the Genesis account of humanity’s creation but also affirmed this occurred at the very beginning of Earth’s time frame.

Jesus Christ clearly affirmed the historicity of a literal human couple during His earthly ministry. In Matthew 19:4 He tells us, “Have you not read that He who made them at the beginning made them male and female.” The Lord not only confirmed the Genesis account of humanity’s creation but also affirmed that this occurred at the very beginning of Earth’s time frame. And we know from detailed genealogies throughout the Bible combined with scriptural data on times of birth and death3 that Earth is approximately 6,000 years old.

The idea that after billions of years of primeval Earth history, followed by millions of years of evolution, humans somehow magically emerged from apes is completely unbiblical and is also unsupported by sound science. There truly is no need for Christians to compromise on this important issue. Adam was a real person.