One of the major themes of the Bible is unity. Not just acquiescence or assent, but total agreement in mind and spirit. Such an ideal is very difficult to accomplish—especially among human beings! From time to time some churches have been privileged to note such an agreement, but it is rare even among those organizations founded by the Lord Jesus and under the oversight of the Holy Spirit. Occasionally, some Christian groups operate (at least at a Board level) with total unanimity as the “go ahead” signal, but more often than not we all fall victim to the “majority rule” culture of a democratic society.

I am very glad to pass on to our Acts & Facts readers that such rare unanimity was experienced by the ICR Board at our January 20, 2017, meeting. After several years of consideration and prayer, the Board approved the start of construction of the ICR Discovery Center for Science and Earth History. I must tell you that the discussion was long and serious, but as the Lord seems to desire, when the decision was made everyone was in complete agreement that we should begin.

We have, as many of you know, been seeking to raise enough funds to begin building the Discovery Center. The earlier stages of this vision began way back in the Santee, California, days as ICR tried to cobble together a series of displays that would demonstrate the paucity of evidence for the evolutionary story and provide some of the more positive evidence for the creation message of Scripture.

After it became clear that the Santee operation needed to move its headquarters to a central location to more efficiently meet the nationwide ministry requirements, all of us began praying that the Lord would provide a larger campus. Hopefully, it would accommodate the potential of a world-class museum or exhibit center that could more aggressively display the growing body of evidence that the Bible is both historically accurate and scientifically viable.

As should be the case, the need and the vision must also come under the verification of the Lord’s will. Sometimes the syncing of those elements is more demanding than it appears on the surface, no matter how much it is desired or how important the vision may seem. Often, the dream waxes and wanes with the demands of the moment, and Scripture seems to provide many examples of the necessity of ensuring that the Lord’s people do not get out ahead of His will—and that the Lord’s people are absolutely in sync with the totality of the principles of Scripture.

One of those principles ICR has been committed to since its inception is not going into financial debt for anything—and not becoming encumbered with either governmental funds or human endowments that would hinder the free exercise of God’s leading in the future. Often, those two simple requirements needed to be reaffirmed as opportunities presented themselves, but either the funding or the unanimity was not forthcoming.

As word of the coming Perot Museum of Nature and Science hit the Dallas area in early 2008, the emphasis seemed to be on the “wonders” of the evolutionary story—and the enormous fundraising effort bumping $200 million seemed to shout the desperate need for something to counter that attempt to present the awful distortion of nature as the “god” of creation.

Soon after that, I tried to encourage our Board to consider a project that could respond—at least in the DFW metroplex—with the truth for the young lives that would potentially be swayed by evolutionary philosopy. The Perot Museum planned to showcase the “evidence” in a magnificent edifice designed to present the half-truths and outright lies of evolution to the hundreds of thousands of young people in North Texas.

Unfortunately, as critical as the need seemed to be, there were other pressing matters to consider. ICR was still young in the Dallas area, and our new staff needs were growing along with the increasing demand for seminars across the nation. Furthermore, the refurbishing of the old buildings, upgrading the labs, etc., required an ongoing special management of the precious operating funds the Lord provided through our very generous donor base. 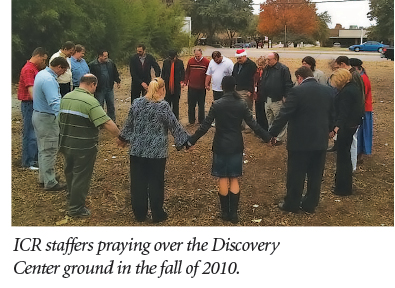 After we relocated ICR’s headquarters to Dallas in 2006, a few of the gracious Christian businessmen in the Dallas area became interested in what we were doing. I was able to meet with some business groups and became involved in First Baptist Church of Dallas, from which relationships came some unusual financial help that enabled us to purchase adjacent property and prepare a sales and distribution center. It would serve ICR well as we planned for the potential exhibits, and also provide a large staging area for the acquisition of artifacts for the Discovery Center.

The property purchases required nearly two full years and multiple million dollars—all of which the Lord provided in extra gifts that put us in the position to build out a greater vision than we originally thought possible.

An interesting prophecy in Isaiah 54:2 encourages Israel to “enlarge the place of your tent, and let them stretch out the curtains of your dwellings; do not spare; lengthen your cords, and strengthen your stakes” in preparation for a coming expansion that they were unable to grasp at the time of the encouragement. Looking back on those few years, I can now see the Lord was trying to help us think a little bigger than we were at the time.

The years from 2006 through 2015 were challenging, but the Lord continued to supply all of our needs, enabling us to expand for the future and still meet the growing operational needs of our staff without ever going into debt.

We began construction plans in earnest in September 2015 after receiving a surprise estate gift in excess of $2 million. You may remember my article in that month’s Acts & Facts in which I cited Isaiah 54 and told our readers of the wonderful gift that helped me (and our Board) begin to expect that the Lord’s timing was coming to fruition.

There was much yet to be done. Although we had spent about $5.6 million by the fall of 2015 on property and artifacts, we really had no concrete idea of the size and cost of such a project. After the Board authorized me to move forward with a formal design, we hired the Beck architectural firm to help us, and in the ensuing several months they provided a great design that was formalized and approved—but was going to cost some $20 million more than we had in the “bucket.”

I suspect you have already received a brochure or two about the design and the exhibit proposals, and many of you have responded with generous gifts to make this possible. We appreciate the way you have partnered with us in prayer and financial support to make this vision a reality.

So, here we are now. The Board enthusiastically approved the construction phase. We have received well over $10 million in donations, large and small, from nearly 7,500 donors during the 17 months since September 2015 and have spent an additional $500,000 in planning, permitting, and burying the utility lines along the main boulevard that fronts our property.

A most generous donor and long-time supporter of ICR decided to commit to $4.5 million in additional funds so we can begin the construction now! God is so good, my head and heart are still swimming!

As many of you can attest, any time you begin a serious capital project (kitchen remodel, home addition, church building, etc.) you can expect that it will take longer and cost more than the best and most honest estimate can extrapolate. Things always cost more as you get into them, and the time involved is always adjusted as the work progresses.

We would be naive to expect otherwise.

So, although we have enough to get started and the construction firm is happy with what is available, it is almost guaranteed there will be more needed in the days ahead. Some of you have not yet given to invest in this legacy project. I would encourage you to consider the possibility of sharing what the Lord has enriched you with—even if you consider it a small gift. Most of the gifts to this project have not exceeded $100. Every gift counts, and every gift counts with the Lord.

I anticipate we will need another $1 million to complete unexpected construction costs, and probably another $3 to $5 million for the completion of the exhibits. I do anticipate the Lord will provide whatever is needed. His provision thus far has been sufficient to increase our shallow faith. I do not expect He will let us down.

But, the Lord has always worked through the gifts of His people. When we share our earthly things with the works of the Kingdom, God promises that we will share in the true value of the eternal Kingdom. Here are a few of my favorite Bible passages about giving to remind us all of God’s faithfulness.

If you would like to learn more about the ICR Discovery Center, check out our website at ICR.org. The site provides an excellent perspective of how this Discovery Center will establish a legacy platform that will challenge the generations to come.