Why Do Animals Use Sexual Reproduction? | The Institute for Creation Research
Skip to main content 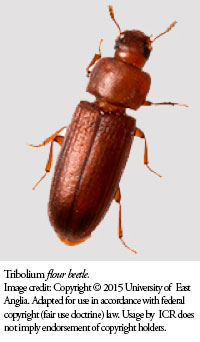 Biologists from the U.K. conducted a 10-year-long experiment on common flour beetles to help understand why insects keep on using sexual reproduction despite its inefficiencies. Though they interpreted the results as supporting evolution, a key observation on the immutability of reproductive systems calls that into question.

Inbreeding amplified the mutations that had already accumulated in the two reproducing groups. By seeing how many generations the critters were able to successfully mate in brother and sister pairs before they entered the "extinction vortex," these researchers discerned that the population that had more males than females for many generations staved off mutation-caused extinction much longer than the population where every male beetle could meet and mate with a female. 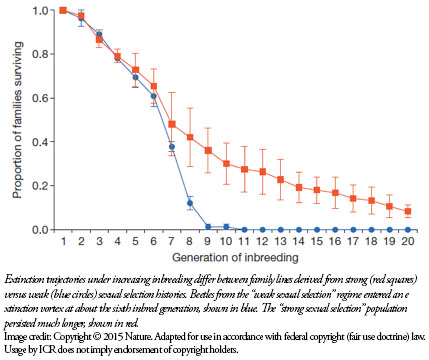 The team's key question centered on "explanations for the maintenance of costly sexual reproduction," according to Nature.1 Why do animals risk spending so much time and energy on male and female forms and behaviors when "all-female asexual populations would be a far more effective route to reproduce greater numbers of offspring," according to a University of East Anglia press release?2

University of East Anglia biology professor and senior author of the Nature article Matthew Gage revealed the answer, saying, "Our findings provide direct support for the idea that sex persists as a dominant mode of reproduction because it allows sexual selection to provide these important genetic benefits."2

Staving off extinction by somehow minimizing mutational buildup supplied the most important genetic benefit. But does this benefit best explain why "sex persists?" In other words, is there an even better reason why animals—including flour beetles—keep on reproducing sexually?

The researchers did not mention a key observation: No biologist has ever described a natural or man-made process, including "sexual selection" or genetic modification, that reorganized an animal's mode of reproduction. It's far too complicated. Perhaps the reason why these beetles keep on reproducing sexually is not because of the nice benefits of staving off extinction to a future date, but simply because they have no other way to do it! They can only reproduce according to their designed programming.

Reorganizing flour beetles' mode of reproduction would involve altering their instinctual behavior patterns, inventing and integrating new genes, reshaping sexual organs, and networking who-knows-how-many cellular interactions. For example, one team found that several genes involved in making legs and antennae do not contribute to the female flour beetle's main reproductive parts, namely the coxite, stylus and vulva.3 This implies that whole new genes might be necessary for it to reproduce non-sexually.

Plus, whoever or whatever would transform the flour beetle's reproductive system would have to make sure all the new parts worked correctly in just one generation or the insects would simply die off.

The results of this diligently conducted experiment thus may not answer why beetles, and by extension other animals, persist in sexual reproduction. How else are they supposed to reproduce but the way God designed for them? But the results do show a clear benefit to that design—it helps the critters minimize the relentless effects of mutation accumulation in a world that endures its sin-cursed condition.