The heavens declare the glory of God; and the firmament shows His handiwork. Day unto day utters speech, and night unto night reveals knowledge. There is no speech nor language where their voice is not heard. (Psalm 19:1-3)

The heavens do indeed declare the glory of God, but some people choose to believe that the heavens appeared by random chance out of nothing—a stance for which they are “without excuse.” Paul so forcefully points out in Romans 1:18-20 that who God is can be understood “by the things that are made.” These people tend to support their beliefs with various scientific models such as the radioactive dating methods we have been examining in this series. This article will address the uranium-lead (U-Pb) and thorium-lead (Th-Pb) models.

Along with stratigraphic assumptions, the U-Pb and Th-Pb dating methods have been regarded as the gold standard for “deep-time” dating. Very few in the geochronology field would dare question the results of these dating methods, and therefore, by consensus, they are considered as scientific fact within the secular scientific community.

Unlike our previous radioisotope clocks, which were based on a single parent-daughter decay sequence, the U-Pb and Th-Pb-based clocks involve multiple daughters in the decay chains, from 238U to 206 Pb, 235U to 207Pb, and 232Th to 208Pb. Fortunately for geochronologists, the daughter isotopes produced in each decay chain are unique to that decay chain, and the half-lives of 238U, 235U, and 232Th are all much greater than the half-lives of any daughter in their respective decay sequence. Thus, each decay series is in a condition generally known as secular equilibrium1 when used for deep-time estimates and can generally be mathematically represented as a single decay sequence: 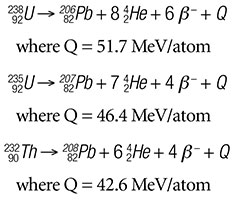 Uranium and thorium are both members of the actinide series of elements. Elements in this series progressively fill the 5f electron orbitals and thus have similar electron configurations. Since the chemical properties of an element depend upon its electron structure, members of the actinide series have similar chemical properties. Thus, they can substitute freely and extensively for each other. This means that as 238U, 235U, and 232Th proceed through their decay chains, they can easily become separated from their final daughter isotopes, 206Pb, 207Pb, and 208Pb respectively. This is especially true for the radon (Rn) gas daughters of each decay chain, which are in the gaseous state at temperatures above -71 °C, in each decay sequence. If that separation distance is larger than the sample size, then significant error will be introduced in any attempt to date that rock formation because the correlation between parent and daughter has been broken.

The early 20th century experienced a rush to use these decay sequences as clocks for measuring the ages of rocks in which they were found. Five basic methods were tried that depended on the accumulation of He or Pb in the rock formation being dated.

For reasons spelled out by Gunter Faure (reference 2), the first three methods are no longer commonly used. It is interesting to note that recent work using Method 3 yields very young ages for supposedly ancient rocks.3,4 Method 4 takes us back to an old friend (isochron dating), and Method 5 will be covered in a subsequent Acts & Facts article. The isochron equations for each of the decay series, using non-radiogenic 204Pb as the index isotope, can be expressed as: 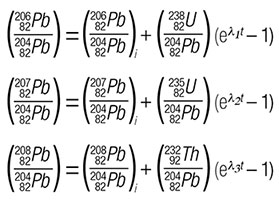 Solving each of these equations then yields three independent determinations for any rock formation containing both U and Th. The solutions to these equations depend upon the same four basic assumptions that all radioisotope dating methods depend on, plus the homogeneous assumption necessary for all isochron-based methods; i.e.:

As pointed out in previous articles of this series, these assumptions are tenuous at best, and the methods do not reproduce known ages of rock formations.

Since these are the primary methods for establishing the age of the solar system, a new question arises: Where do the heavier elements in the periodic table come from? Nuclear physics tells us that there are only two ways that heavier elements can be produced from lighter elements—by nuclear transfer reactions and/or nuclear fusion reactions.5 But nuclear transfer and fusion reactions are only self-sustaining if they are exothermic (i.e., if they give off energy). This means that they cease to produce heavier elements unless they are part of a system that produces enough energy to drive the reactions forward when they become endothermic (i.e., when they need energy to proceed). Stars are the only known objects in the universe that can potentially do this. Self-sustaining fusion in stars is only possible for elements below iron in the periodic table.

Now another subtle assumption creeps into the radioisotope dating paradigm. It has been hypothesized that the heavy elements in our solar system come from a cluster of supernova explosions about ten million years ago that produced a “local bubble” around our solar system.6 All heavy elements supposedly came from this explosion, which left a peanut-shape region of space approximately 300 light-years long and containing gas at roughly one million degrees. Many questions now arise. How has a gas in interstellar space remained at one million degrees for ten million years? What is the link between this hot gas bubble and supernovas? How did such a low residual density of gas (0.001 atoms/cm3) “seed” the relatively large amounts of heavy elements currently observed in our solar system?

Finally, it would take approximately 1.8 x 1010 kJ/mole to form one mole of 238U by fusing four V atoms—a highly improbable reaction to begin with. How does a supernova generate this kind of energy to form not just 238U but all the elements heavier than iron? Perhaps “the heavier elements are primordial” is a better explanation. Origins of the heavy elements, cosmological production of the parent and daughter isotopes, and migration of the intermediate daughter isotopes in these decay chains make Method 4 suspect and certainly not a methodology that meets the criteria for scientific fact. Our next article will take a closer look at Method 5.