Wouldn't two billion years of mutations and changing environments inevitably produce some effects in an organism? After all, in only a quarter of that supposed time, evolutionary processes are said to have transformed fishes into people. Plus, mutations occur nonstop, so wouldn't enough mutations have accumulated after billions of years to affect some visible body part? Yet, the authors of a new paper in the Proceedings of the National Academy of Sciences say that a dramatic lack of change in a certain bacteria somehow proves evolution.1

Fossilized bacterial mats can be found off the coast of Western Australia. According to the Proceedings report, these sulfur bacteria are conventionally dated at 1.8 billion years old, and yet they perfectly match fossils found in the same area dated to 2.3 billion years. 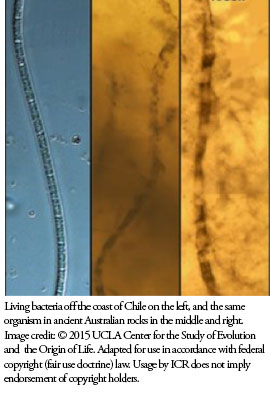 That represents 500 million supposed years of no evolution in these bacteria. But stunningly, the same bacteria are alive and well today in muds found off the coast of Chile. William Schopf, a UCLA professor and lead author of the report told the UCLA news room, "It seems astounding that life has not evolved for more than 2 billion years."2

To what did he attribute this miraculous evolutionary lapse? Schopf explained for UCLA news, "The environment in which these microorganisms live has remained essentially unchanged for 3 billion years."2

Schopf also said, "Evolution is a fact." His evolutionary logic is plain: Evolution occurs through changes in environments, but these germs did not evolve. Therefore, their environments never changed. Simple logic, right?

Of course, Flood geologists are unencumbered by the dogma that these systems represent great time periods. What secular scientists interpret as a series of extinctions separated by millions of years could actually represent surging watery pulses during the Flood year when God was destroying Earth. If so, that explains why continent-covering sediments rapidly buried sea and sometimes land creatures together all over the world.4

Schopf's simple logic also ignores the fact that the bacteria in Chile live almost 8,000 miles from Western Australia. A path along the continental margins between those points would take several times more miles than that. Are we to imagine that these bacteria's ancestors kept to environments "that remained essentially unchanged" as they crept one germ at a time from one identical mud flat to another around the globe for millions of years while sea life everywhere else was dying off during ice ages, asteroids, and volcanoes?5

Believing in the Genesis Flood requires less faith than that.