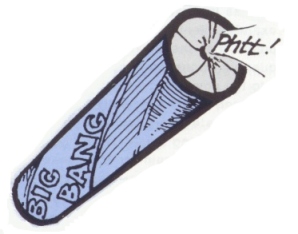 The notorious Big Bang that supposedly started our evolving cosmos was neither "big" nor a "bang." It is said simply to have evolved suddenly out of the primordial "Nothing" to become an infinitesimal particle of space/time. This remarkable particle somehow contained essentially infinite energy and unlimited information which enabled it to expand rapidly into our gigantic universe with all its stars and galaxies and animals and people.

The name "Big Bang" was originated in 1950 by Fred Hoyle who was deriding the whole idea while promoting his own "Steady State" concept of the universe. Ever since, "Big Bang" has seemed somewhat inelegant as a name for such a sophisticated mathematical construct, so in the August 1993 issue of Sky and Telescope magazine, one of its editors, Timothy Ferris, announced a contest to determine a better name to replace "Big Bang." The three judges were to be Carl Sagan, Hugh Downs, and Ferris.

The contest proved a great public relations and media event, with over 13,000 entries from persons in 41 countries.1 Since there are only about 10,000 professional astronomers in the whole world, this subject apparently is of considerable concern to people in general. Many remarkable and ingenious names were submitted. Some of my own favorites include: "Matter Morphosis," "The Bottom Turtle," "Super Seed," "Hubble Bubble," "Bertha D. Universe," "Doink," "Let There Be Stuff," and "Hey Looky There at That!"

With 13,000 names to choose from, it would have seemed that the three very eminent judges could have selected the best and then started an advertising promotion that would have given the great event the dignity it deserves.

However, they could not decide and finally gave up. Astronomer Sagan explained: "here's nothing that even approaches the phrase 'Big Bang' in felicity.... The idea of space-time and matter expanding together and not 'into' anything may be permanently beyond reach in the universe of short and lucid phrases."

I would agree. How does one really name something as esoteric and intangible as this mathematical toy of the cosmo-physicist? What, exactly, is meant by "quantum fluctuations of empty space," as they are saying by way of explanation? In an article intriguingly titled, "Everything for Nothing," a theoretical physicist at the Institute for Advanced Studies in Austin, Texas, notes that Alexander Vilenkin of Tufts University "proposed that the universe is created by quantum tunneling from literally nothing into the something we call the universe. Although highly speculative, these models indicate the physicists find themselves turning again to the void and fluctuations therein for their answers." 2

Highly speculative indeed! Astronomer Robert Oldershaw, of Dartmouth College, has some pithy comments about all this. "First, the big bang is treated as an unexplainable event without a cause. Secondly, the big bang could not explain convincingly how matter got organized into lumps (galaxies and clusters of galaxies). And thirdly, it did not predict that for the universe to be held together in the way it is, more than 90 per cent of the universe would have been in the form of some strange unknown dark form of matter." 3

It does seem that science is becoming quite squishy if it has to salvage its theory of cosmic evolution by if 90 per cent of all matter in the universe is invisible, unknown, and strange. Oldershaw goes on to say: "Theorist also invented the concepts of inflation and cold dark matter to augment the big bang paradigm and keep it viable, but they too have come into increasing conflict with observations. In the light of all these problems, it is astounding that the big bang hypothesis is the only cosmological model that physicists have taken seriously." 4

There are other cosmological models (the steady state theory, the plasma theory, etc.), but these have even more problems, which is why most cosmologists cling to the Big Bang. Nevertheless, as one of America's most eminent astronomers have said: "Big bang cosmology has become a bandwagon of thought that reflects faith as much as objective truth.... This situation is particularly worrisome because there are good reasons to think the big bang model is seriously flawed." 5

The fact is that astronomers simply do not know how the universe evolved, nor do they know how stars evolved, how galaxies evolved, how clusters of galaxies evolved, how anything evolved! They do have mathematical equations, which purportedly describe in part how some of these might have evolved, but that is very different from any experimental proof! It should be remembered that no one has ever actually observed the formation of a star or a galaxy or a universe.

In the very nature of things, this type of exercise must always be nothing but sheer speculation. Astronomer Roger Windhorst, of Arizona State University, has said concerning stellar evolution: "Nobody really understands how star formation proceeds; it's really remarkable." 6

With respect to galactic evolution, a recent article is even entitled, "Seven Mysteries of Galaxies," indicating how little is really known about such things. Its authors say: "Now, in the 1990s we can still say that we are only on the verge of understanding how galaxies are born, how they work, and what roles they play in the universe at large." 7 Furthermore, "the process by which galaxies clump together poses a significant mystery for astronomers." 8

Lest anyone misunderstand, none of the authorities whom I have quoted is creationist in any sense of the word; they are all devout evolutionists. Nevertheless, they are honest enough to admit they do not yet have any proof.

And the sad thing about all this is that there are a number of evangelistic scientists and theologians who are willing to give up the straightforward, factual, sensible Genesis record of the creation of the universe in order to accommodate this badly flawed Big Bang model of evolutionary origins. Some are even trying to convince Christians that the Big Bang is God's work of creation, as announced in Genesis 1:1.

The leading astronomers, cosmologists, and astrophysicists harbor no such notions, of course. A few may be flirting with New Age pantheism, but not Biblical creationism. Note the words of Paul Davis of England, one of the world's most influential astronomers: "When the Big Bang theory became popular in the 1950s, many people used it to support the belief that the universe was created by God at some specific moment in the past.... However, this sort of armchair theology is wide of the mark. The popular idea of a God who sets the universe going like a clockwork toy and then sits back to watch, was ditched by the church in the last century." 9

Sometimes, Christians refer to Davies, or Fred Hoyl, or Robert Jastrow, or some other eminent astronomer as believing in God, but their "god" is not the God of the Bible, and it is dangerous to follow them. As Davies says, it is "possible to imagine the universe coming into being from nothing entirely spontaneously...." He sees "no need for an external creator." 10

Oh, but there is a need! Without a Creator, there is no Savior and no hope for eternity. May God help us to do all we can to tell the world there is a great God who made us for Himself and has even, through Christ, given us eternal life in Him!

If the evolutionists want a better name for the "Big Bang," I would like to suggest the "Big Bust." That is what it will be in a few years, anyhow, with all the evidence piling up against it.

There is not a fact of science anywhere to keep us from believing that: "By the word of the Lord were the heavens made...and all the host of them by the breath of His mouth.... For He spake, and it was done; He commanded, and it stood fast" (Psalm 33:6,9).

* Dr. Morris is Founder and President of the Institute for Creation Research.