During the great Flood of Noah’s day, God unleashed His great power, exercising His righteous judgment on the wicked and violent civilization that had rejected Him. He promised not only to judge sinful man, but also to judge the earth (Genesis 6:13). All of Adam’s dominion (Genesis 1:26) came under the sin penalty because of his choice to reject God’s kingship over creation. By the time of Noah’s day, rebellion had increased so much that God finally enacted His just penalty for sin (Romans 6:23). He sent the worldwide Flood to punish the wicked world, purge the entire planet, and start over with the descendants of righteous Noah.

The Flood primarily involved hydraulic processes, with rainfall pummeling the earth for 150 days (Genesis 7:11-8:4). The “fountains of the great deep” also broke open, spewing onto the surface of the earth huge volumes of water, magma, and whatever else was beneath the earth’s crust. “Fountains” suggest tectonic activity as well, both on land and under water.

Through an understanding of today’s volcanic eruptions, we can better comprehend those of the past. However, the rock record of the past suggests that yesterday’s volcanoes were evidently “supervolcanoes,” accomplishing geologic work hardly comparable to those we currently observe. 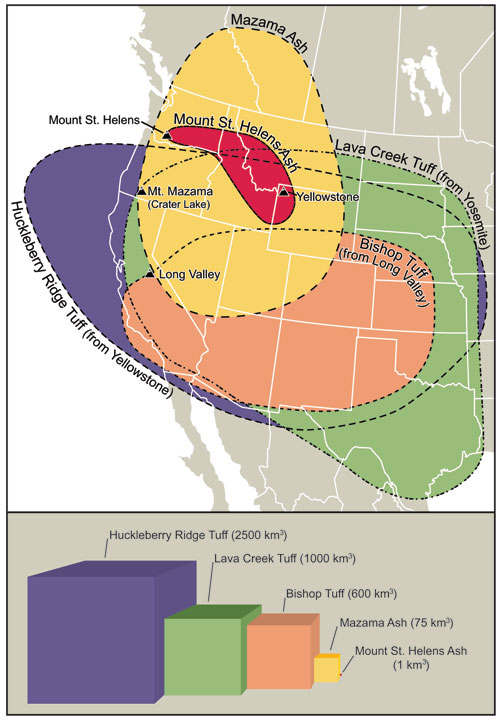 If we plot the volume of ash and lava extruded by volcanoes throughout history—comparing Vesuvius (79 A.D.) and Krakatoa (1883) to more recent volcanoes, such as Mount St. Helens (1980) and Pinatubo (1991)—we come to the conclusion that the earth processes are quieting down. Then if we plot the materials blown out by volcanoes that erupted during the great Flood and soon thereafter (inferred only from the materials left behind), then we conclude an exponential decline in the power of earth’s volcanoes over time. Flood volcanoes were many times greater than those recently witnessed.

Earth underwent a complete tectonic restructuring during the great Flood, with supervolcanoes, mega-earthquakes, supercurrents of flowing water and mud, and hypercanes. All of these exhibit a similar exponential decline in intensity. Thankfully, we do not witness comparable events, and God promised we wouldn’t, but by studying the impact of the great Flood we can begin to understand how much God hates sin. Likewise, we can surmise the nature of the coming judgment, when the earth will pass away and be replaced by the new earth (2 Peter 3:10-13).