The area surrounding what is now Wuda, Inner Mongolia, once teemed with tropical plants before a tremendous ancient volcanic explosion overwhelmed it. The ash-entombed forest, buried between coal layers, left such remarkably preserved fossilized plants that artists and paleontologists have been able to reconstruct the former wet-forest landscape.

Scientists took advantage of this rare opportunity to investigate, in unprecedented detail, discrete segments of a whole fossilized forest. A nearby coal mining operation removed a tough crust and exposed the well-preserved fossils, which were found over a very large area. 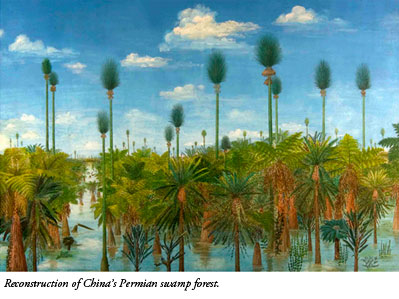 In their study in the Proceedings of the National Academy of Sciences, the researchers called the site the “early Permian vegetational Pompeii at Wuda,”1 likening it to the famously preserved remains at Pompeii, Italy. “The consistent thickness of ash deposits in the region, as well as the size of individual ash particles, suggest that the volcanic blast occurred more than 100 kilometres away,” according to Nature News.2 This roughly equates to an ash blanket of 31,000 square miles, compared with the 230-square–mile blanket produced by Mount St. Helens’ 1980 explosion.3

The majority of plant fossils, such as those found in coal, were washed in from elsewhere, sorted, and compacted. But these plants look as though they were buried in place, preserving their original spacing along an ancient forest floor. Most of the plants were relatively short tree ferns. Dwarf shrubs, cycads, and clusters of ferns also grew, and much taller trees dotted the ancient scene. The study authors wrote, “It is likely that the same type of vegetation would have covered the very extensive mire in all directions and to the horizon.”1

But they did not mention the possibility that the entire forest may have been transported like a giant sheet. Although the tall trees had been toppled, the collective root mass appeared intact. Perhaps it originally was a floating forest.4

Evolution maintains that these Permian plants existed 240 million years ago. But ironically, according to that same evolutionary timeframe, their fossils should no longer exist. The fossils and all of China should have completely eroded about 14 million years after they were deposited, assuming the evolutionary paradigm and known erosion rates.5 The study authors wrote, “Excavation was necessary to secure the stunning specimens of this flora because weathering occurs rapidly and destroys the fossils.”1 So, did China’s landscape experience no weathering for over 200 million years?

In contrast, biblical history easily explains these “catastrophically preserved floras.”1 The extraordinarily cataclysmic conditions of Noah’s Flood—so violent that Scripture records that it totally destroyed the earth’s surface6—provided the tremendous energy required to wash plant matter into mats that would later turn to coal, to dislodge and transport a whole forest, and to unleash volcanic explosions that covered vast regions.

Image credit: Copyright © 2012 National Academy of Sciences. Adapted for use in accordance with federal copyright (fair use doctrine) law. Usage by ICR does not imply endorsement of copyright holders.

Creation Geology [Podcast]
Can we believe both the Bible and geology? ICR geologist and Research Associate Dr. Tim Clarey uncovers how both fit together in this 5-part podcast...
BY: TIM CLAREY, PH.D.

Oil as a “Soft Tissue”
Oil is in the news almost every day due to fluctuating prices and controversial fracking. How does oil fit into the Bible? Was oil made in the...
BY: TIM CLAREY, PH.D.

Antarctica Rising: Uplift Rate Suppresses Conventional .,.
Land is not supposed to rise this fast. Generations of geologists have been trained to think in terms of slow and steady processes to explain Earth...
BY: BRIAN THOMAS, PH.D.
More Earth Sciences Resources

Earthquakes Still Active in Utah
On March 18, 2020, a 5.7 magnitude earthquake shook the Salt Lake City area. Specifically, it hit underneath the town of Magna, Utah. Since that time,...
BY: TIM CLAREY, PH.D.
More Human Stewardship

Leading Through Sacrifice
The term “sacrifice” is often tossed around without giving genuine thought to what it really means. Is it really a sacrifice to give up...
BY: CHRIS KINMAN

Coronavirus Causes "Waffle House Index" Red N.,.
Giant yellow squares housing black letters signal to breakfast lovers across the United States that they have found a safe haven where they can enjoy waffles,...
BY: TREY BOWLING

Claims of 'Freshwater' Plesiosaurs Drowned by the Flood
A new discovery in Morocco’s Saharan Desert has evolutionary scientists making claims that plesiosaurs lived in freshwater too.1 Usually...
BY: TIM CLAREY, PH.D.