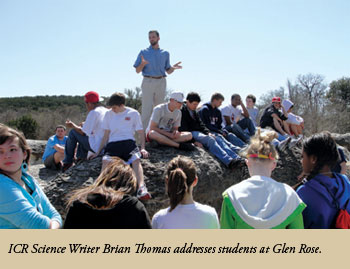 Every year, First Baptist Academy (FBA) high school students in Dallas, Texas, take the week before spring break to participate in extracurricular courses. These Interim Term classes have ranged from sewing and culinary arts to self defense and a trip to England. This year, students had a new option--exploring creation science with Institute for Creation Research scientists.

The course, God's Amazing Creation, included visits to the ICR campus, the Natural Science Museum, the Dallas Aquarium, and the Creation Evidence Museum and the Paluxy River bed in Glen Rose, Texas. Fewer than 20 students were expected to sign up, but FBA teacher Ivan Johnson said, "We had to cut it off at 40. They were all interested in the creation aspect and hearing from the experts."

On Tuesday, March 9, students heard from Dr. Randy Guliuzza, a medical doctor and engineer, and Dr. Nathaniel Jeanson, who said, "One of the first questions asked was, 'How old do you think the earth is?' To me, that underscores that this is the question on people's minds. I don't think people intuitively think that we came from monkeys. Yet that 'millions of years' sticks in their minds." 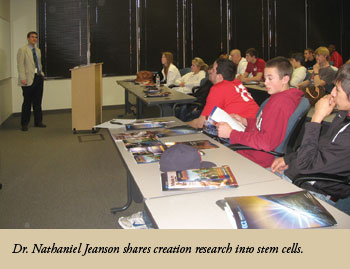 A cellular biologist and Harvard graduate, Dr. Jeanson spoke on stem cell research, which provoked other medical ethics questions among the students, including human/chimp chimeras and cloning.

"I really enjoy talking to that age group because they are working through [these issues] themselves," he said. "They ask all the questions they can and don't have any adult reservations about asking the wrong question. Which I think is really cool. That's the right age to give them the right answers before they form all their opinions."

ICR Science Writer Brian Thomas accompanied the students to Glen Rose on Wednesday. "A lot of them hadn't seen a real dinosaur track in rock before," he said. "They were also able to see how these features fit in the context of having been formed by Noah's Flood during the Flood year."

He pointed out some wedge-shaped holes containing clam shells in solid rock at the Paluxy River bed. "These were clam burrows," he said. "They were trying to burrow out, which can take a matter of hours depending on what they're burrowing through. But the mud hardened into rock too quickly for them to get out, which shows rapid rock formation. If rock layers take millions of years to form, then why didn't these clams have enough time to burrow out before they got trapped?" 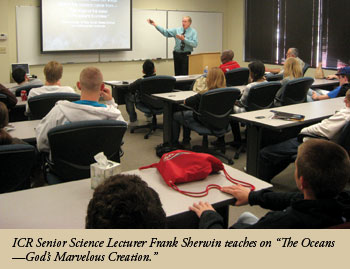 Zoologist Frank Sherwin spoke on Thursday about the oceans. "Three quarters of the planet is covered with water, and it's important to look from a non-Darwinian perspective as to the origin of this water, what it contains, and how it can give credence to the creation, rather than Darwinian evolution."

"It's always important to have young people hear the alternative to Darwinian evolution and be exposed to some real science that worships the Creator and not the creation," Mr. Sherwin said.

Unlike at pastor and teacher conferences, ICR Events Director Chas Morse said this was an opportunity for ICR to directly reach students. "The FBA event created a template that we would like to expand with other Christian schools and even home school groups. It really is exciting."

"If you go to the finest colleges and universities in the world, you'd have to pay a lot of money to hear men like these talk," FBA's Mr. Johnson said. "You may never get to hear from Harvard-educated people like we did."

When asked if FBA will return for the 2011 Interim Term, he replied, "Yes. Most definitely."