Will Solar Inactivity Lead to Global Cooling? | The Institute for Creation Research
Skip to main content

Global warming continues to make headlines and drive policy decisions, based on the widespread assumption that man-made carbon dioxide emissions are the main contributing factor to an increase in world temperatures. My recent Acts & Facts articles have questioned that assumption,1 with the latest discussing a new theory of climate change developed by Henrik Svensmark that offered a physical explanation for the connection between solar activity and global warming on the earth.2

Svensmark essentially theorized that when the sun is active, it deflects cosmic radiation from outer space, which reduces low cloud cover and allows more solar radiation to strike the earth’s surface, resulting in warming. When the sun is quiet, it allows cosmic radiation to increase the cloud cover, which reflects more solar radiation, cooling the earth. The sun has most recently been showing a decrease in activity, which within the next few years may well result in a decrease in global temperatures. 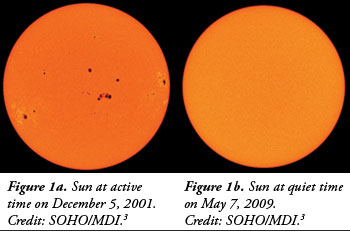 Sunspots are an indicator of an active sun. These planet-sized islands of magnetism appear as dark areas on the surface of the sun and reveal intense convection in and below the photosphere. They are sources of solar flares, coronal mass ejections, strong solar winds, and ultraviolet radiation. The number of dark, cooler sunspots normally varies in frequency with a period of about 11 years. When the sun is active, the number of sunspots can exceed 100, and when it is quiescent the number may be zero. Current and archived images of the sun may be found online at the Space Weather website.3 Figures 1a and 1b show the sun on December 5, 2001, when it was active, compared with May 7, 2009, when it was quiescent. 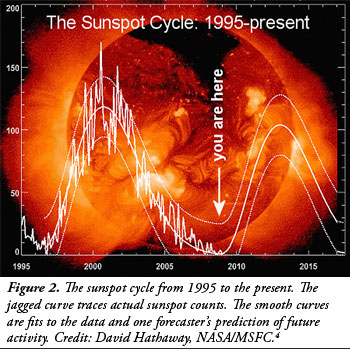 The sun is currently in a quiet period, as shown in Figure 2. In fact, the current sunspot minimum is setting records for its length. There were no sunspots observed on 266 of the 366 days in 2008 (73 percent), and as of May 7, 2009, there had been no sunspots on 109 of the 127 days since the year began (86 percent). Solar physicist Dean Pesnell of the Goddard Space Flight Center concluded, "We're experiencing a very deep solar minimum." Sunspot expert David Hathaway of the Marshall Space Flight Center agreed, stating, "This is the quietest sun we've seen in almost a century."4

The Sun's Connection with Climate

Scientists are baffled by what they are seeing on the sun's surface, and this lack of activity could have a major impact on global warming. For many years climatologists thought that the sun should have an effect on earth's weather. But after many years of unsuccessful attempts to explain temperature and precipitation variation based on sunspot number, most dismissed the connection because statistically significant correlations could not be demonstrated. And the magnitude of the global variation in temperature and precipitation (about 5 percent) did not seem to be explainable by the small (less than 0.1 percent) variation in solar radiation. Today there is still reluctance to accept a sunspot explanation because of its connection to those who deny climate change. But now the speculation about an earth/sun connection has grown louder because of what is happening to the sun. No living scientist has seen it behave this way.

The energy coming from the sun is the primary driving force for the earth's climate system. It drives the global circulation patterns of the atmosphere and ocean and is a key component of the greenhouse effect. When the sun has gone quiet like this before, it has coincided with a slight cooling of the earth. For example, the Maunder Minimum lasted about 50 years in the middle of the Little Ice Age between about 1550 and 1750 A.D. It had nearly zero sunspot activity and temperatures were generally cooler over most of Europe. When the sun is active, it coincides with warming. For example, the sun was very active from about 1850 to 2000 and the average global temperature in the northern hemisphere warmed during that period. Since about 2000 the sun seems to have declined in activity. There is speculation by some that if the sun is now growing quiet, cooling may be starting.

Will Solar Inactivity Lead to Cooling? 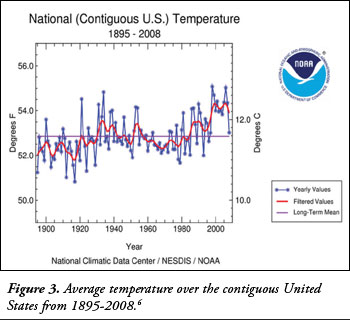 Supporters of the carbon dioxide theory of global warming respond in two ways to recent evidence for changes in the sun--they say that either there is no connection between solar activity and global warming, or that if there is a connection, the effect of carbon dioxide on global warming is much stronger than the solar influence. The ultimate answer as to which theory is correct may have to wait a few years to see if a continued decline in solar activity leads to cooling or not. However, a few hints that global cooling has begun may be evident in the cooling temperatures across the U.S. in 2007-2008 shown in Figure 3, and the apparent return to more normal sea ice extent in the Arctic.5

It is true that the observed increase in carbon dioxide in the atmosphere likely contributes to global warming, but it is not at all evident that it is the primary cause. Unfortunately, the actions by advocates of carbon dioxide-caused global warming to mediate the effect may prematurely incur a massive debt load on our nation before we know the answer to the question above.