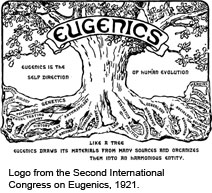 In a supposed “letter to the editor” last week for the Sunday Herald of Scotland titled “Eugenics may not be bad,” Oxford professor Dr. Richard Dawkins, author of The God Delusion and leading evangelist for Darwinian evolution, defended the need to examine the positive benefits of selective human breeding or “eugenics” as Hitler had attempted in Nazi Germany in the 1930s.

Actually, the Sunday Herald had lifted the Dawkins content from the Afterword in a new book by John Brockman titled What is Your Dangerous Idea?

Eugenics is defined as “the study of or belief in the possibility of improving the qualities of the human species or a human population, esp. by such means as discouraging reproduction by persons having genetic defects or presumed to have inheritable undesirable traits (negative eugenics) or encouraging reproduction by persons presumed to have inheritable desirable traits (positive eugenics)."1

Some have called eugenics “racial hygiene,” a cleansing of the races to promote the good and eliminate the bad.

Hitler’s Nazi regime enacted the “Law for the Prevention of Hereditarily Diseased Offspring” in 1933, which effectively gave the Third Reich free reign to forcibly sterilize selected segments of German society as determined in the “Genetic Health Courts.” Other Nazi laws went further, such as Action T4, resulting in the euthanizing (aka murder) of millions by the end of the war, mostly Jews.

Dawkins, who has been called “Darwin’s Rottweiler” because of his aggressive defense of Darwinian evolution and his even more scathing attacks upon people of faith, considers the idea of eugenics natural:

…if you can breed cattle for milk yield, horses for running speed, and dogs for herding skill, why on Earth should it be impossible to breed humans for mathematical, musical or athletic ability?

If there is no difference between cows and horses and dogs and humans, then Dawkins’ logic is rational and humans should expect to live on the Planet of the Apes, where we will eventually be bred for utilitarian purposes by more highly-evolved apes.

The scenario is, of course, ridiculous, but the moral vacuum in Dawkins’ reasoning still pushes him to toy with the possibilities:

I wonder whether, some 60 years after Hitler's death, we might at least venture to ask what the moral difference is between breeding for musical ability and forcing a child to take music lessons. Or why it is acceptable to train fast runners and high jumpers but not to breed them. I can think of some answers, and they are good ones, which would probably end up persuading me. But hasn't the time come when we should stop being frightened even to put the question?

Not surprisingly, Professor Dawkins has also backed a proposal for the United Nations to confer human rights on apes.

The Apostle Paul commented on this Godless logic long ago:

“For they exchanged the truth of God for a lie, and worshiped and served the creature rather than the Creator, who is blessed forever. Amen” (Romans 1:25 NASB).

Read Do Laws and Standards Evolve? by Douglas W. Phillips for a creationist worldview perspective on law in our culture.