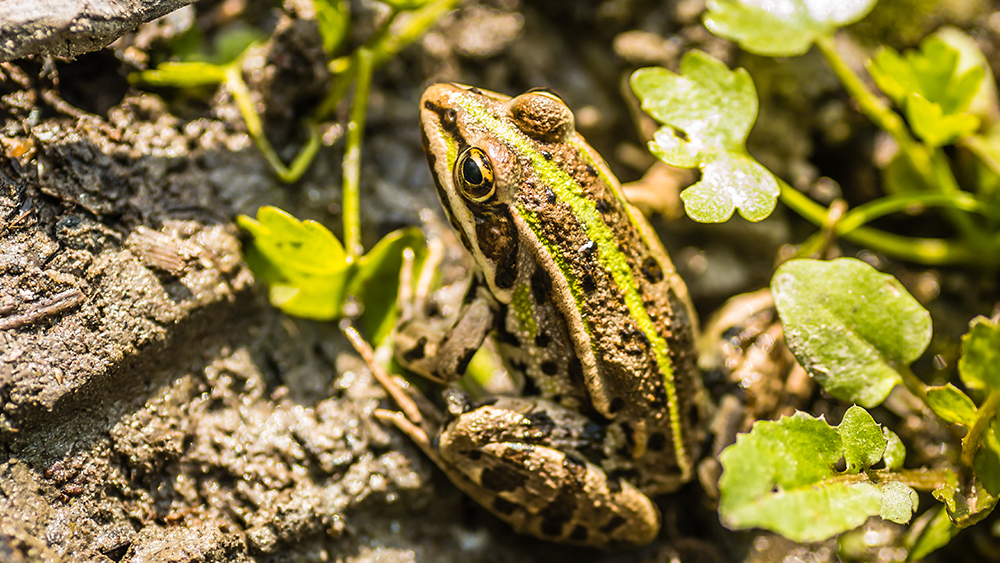 Color patterns in animals, whether vertebrates or invertebrates, are designed by the Creator for camouflage, warning, courtship, or, simply, for the aesthetic value.

Evolutionists have recently conducted investigation of anuran color patterns, “A team of researchers from NYU Abu Dhabi (NYUAD) has discovered new insights into the evolution of color patterns in frogs and toads—collectively known as anurans.”1

But did these color patterns evolve? The same article stated, “Although this color pattern is widespread in frogs around the world, little is known regarding its evolution or genetic origin.”1

This is hardly surprising. Although little is known regarding their color pattern evolution (i.e. vertebral stripe of the grass frog, Ptychadena robeensis), they maintain that the pattern evolved many times. The zoologists “found that the vertebral stripe has evolved hundreds of times and is selected for in terrestrial habitats where visual predators coming directly from above—such as mammals or birds—are more prevalent.”1

Did the researchers actually observe this stripe evolving hundreds of times? Of course not. As far as the stripe being “selected for,” who or what is doing the selecting? To select necessarily means a conscious act, choosing that which is best or most valuable. How scientific is it to insist nothing but blind chance is doing the selecting?

They also compared the genes of closely-related species of frogs and found that, while they present the same stripe patterns, they do not share the genetic variation found in P. robeensis. This led the researchers to the conclusion that the stripe alleles [1 of 2 or more forms of a gene] found in P. robeensis evolved recently.1

But did the stripe alleles recently evolve de novo? How exactly did this happen? “Obtaining a new functional gene sequence from scratch would certainly seem to be highly improbable.”2 Creationists maintain the genetic instructions for stripe alleles were always within the frog genome. Environmental conditions did not cause the amphibians to “evolve” the stripes.

"Our findings establish that the vertebral stripe in frogs and toads holds a great potential in the field of evolutionary biology as it represents a clear example of repeated [recurrent] evolution.”1 What exactly is being said here? Sadly, they are saying nothing of scientific importance. This is just a tautology. Repeated evolution is a broad term and, not surprisingly, can encompass convergent evolution, an equally ill-defined phrase.3

The article did mention investigation into a gene called ASIP (a ubiquitous gene involved with coloration) linked to the stripe pattern in P. robeensis. The “genetic variation affects the level of expression of ASIP in the different morphs, a higher expression leading to a wide stripe and a lower expression leading to a thin stripe.”1 Genetic diversity4 is not macroevolution and does not lead to large changes in populations.

To conclude, this article discusses interesting discoveries of the ASIP gene and its function in frog populations, but it also proposes purely theoretical, vague ideas regarding frog color pattern origin, evolution, and re-evolution.

*  Dr. Sherwin is science news writer at the Institute for Creation Research. He earned an M.A. in zoology from the University of Northern Colorado and received an Honorary Doctorate of Science from Pensacola Christian College.
The Latest
NEWS   ACTS & FACTS   PODCASTS