“Parker had no idea that his teaching of evolution would offend the residents of Desoto County. He had never heard evolution challenged in any of his college classes,” writes David Bedell of the Sun-Herald.

The teacher was Gary Parker, a 22-year-old college graduate looking to make a career in science. Before continuing his graduate education, Gary was hired to teach biology at Desoto County High School in Arcadia, Florida. Evolutionary science was the only real science he had been taught. What other scientific viewpoint was there? How could one study science any other way?

The Battle for Creationism

Scientific study from a creationist worldview—practiced by many of the founding fathers of science like Kepler, Bacon, Boyle, and Newton—had been overshadowed in the early 20th century through the gradual takeover of the educational system by evolutionary atheists. However, creation science gained new energy in 1961 with the publication of The Genesis Flood, authored by Dr. Henry Morris, a scientist, and Dr. John Whitcomb, a biblical scholar. The Genesis Flood quickly became a book that even evolutionist Stephen Jay Gould has called “the founding document of the creationist movement.”

The battle for the Bible had been rekindled, but not without opposition.

In 1963, the same year Parker was hired to teach at Desoto, Madalyn Murray O'Hair pushed her atheist mandate through the Supreme Court in a case that ended school prayer for millions of children across the United States. In the four decades since this ruling, Americans have seen other liberties squashed by the Court: displays of the Ten Commandments, Bible reading in schools, Christmas nativity scenes in town squares, prayers by students at school events, and many more.

This negative drain on American morality, fostered by an underlying worldview that attempted to eliminate absolute truth from consciousness and God from reality, resulted in landmark failures such as Roe v. Wade, which at its core transferred life and death decisions into the hands of teenage girls.

The anti-God, anti-morality, anti-truth campaigns led by O’Hair and others were logical consequences of a belief system saturated with pure naturalism, which was routinely taught in all the disciplines of science. It was “scientific” and, therefore, accepted as fact.

Dr. Morris, founder of the Institute for Creation Research, often communicated his desire to “win science back for Christ.” His formula for doing so? Cutting-edge scientific study and research from a creationist worldview that would consistently demonstrate the fallacy of naturalistic evolution, as well as conclusively present the many evidences supporting the young-earth model of creation as found in the Genesis record. 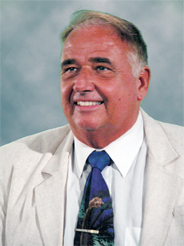 Unfortunately, Gary Parker had not been given the opportunity to even consider the evidence for creation until later in his career when he “discovered that science itself disproved evolution,” Bedell writes. Convinced by the work of Dr. Morris and other creationists, Parker went on to earn advance degrees and teach, write, and speak on creation science issues throughout the world.

Gary Parker discovered truth—and the Savior—through the unflinching witness of men of God—and men of science—who humbly studied and taught the absolute truths the Lord revealed in the Scriptures—and in science.

Dr. Gary Parker is currently Professor of Biology at ICR’s graduate school and continues the mission of training the next generation of scientists and teachers with the evidences for God’s creation. He and his wife, Mary, returned to Arcadia in 1999 and now operate the Creation Adventures Museum.