What body structures uniquely equip humans to throw objects frequently, at high speeds, and—for the practiced—with great accuracy? Research has revealed that if the throwing motion depended directly on muscle, we could only generate half the force that the human frame can actually muster. In the course of answering the question of where the rest of the throwing force originates, one recent study stumbled on a number of reasons why the human body looks like the product of specialized and intentional creation.

Publishing in the journal Nature, four scientists led by Harvard's Neil Roach examined the human mechanics of pitching a baseball and compared them to the chimpanzee's anatomy.1 A chimp's long-armed frame is well-suited for climbing and hanging from tree limbs, but this diminishes its potential for sustained, accurate, high-speed throwing. The researchers identified several uniquely human features that helped solve the mystery of mankind's expert throw.

First, humans have longer legs. Taking that first, long step when we begin the throwing motion stores a measure of elastic energy, later to be released. Second, we rotate our hips with a greater range of motion because of, in the Nature authors' words, "the tall, mobile waists of humans."1

Third, the study authors found a uniquely human angle between the head of the humerus (upper arm) bone and the axis of the elbow. So the overall shape of human arm bones helps store energy used for throwing. A fourth feature also has to do with angles. When throwing, the human frame aligns the upper arm with the orientation of the pectoralis major muscle, and these also align with the torso's rotation angle. This arrangement permits multiple forces to align, producing the fastest motion in the human body—the "rotation around the long axis of the humerus," which rotates more than 9,000 degrees per second!1

Last, humans have "hyperextendible wrists" that store and release even more energy.1 Altogether, the stored energy from the legs, hips, torso, shoulder girdle, and wrist loads its force to that of the appropriate muscle energies onto the projectile.

The end result? Professional pitchers can throw baseballs at close to 90 mph over 100 times during a three-hour baseball game. 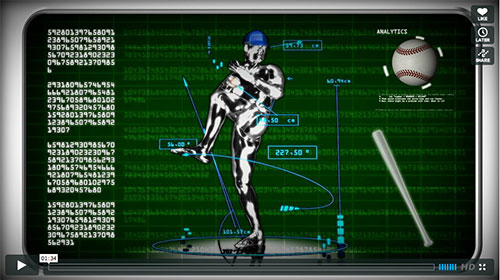 The Nature study did not mention that each of these anatomical features requires precision control by the nervous system, as a recent That's a Fact video highlights.

So much for the verifiable science, which describes how throwing works so well in humans. In exploring why humans have anatomy fine-tuned for throwing, the Nature authors departed from the known to tell a tentative tale.

Following a strict evolutionary history, they ask how the human frame supposedly emerged from that of an ape-like ancestor. "Some of these features were probably selected for functions other than throwing," according to the Nature authors, who also wrote, "Furthermore, high-speed throwing was probably a critical component of a suite of hunting behaviors that enable early members of the genus Homo to thrive in new and varied habitats both in and out of Africa."1

Who selected "some of these features," and when and how? Which ones were "probably selected" first, and how could they have integrated with pre-existing structures? By what specific means could any natural process completely and precisely reorganize an entire body frame—including bone lengths, proportions, angles and thicknesses, muscle structure and attachment points, and nervous system control features—when no such process has ever been seen to accomplish anything so complicated?

These questions remain unanswered, as well as another. Some imaginary transitionary creature would, at some point, have lost its ability to swing from limbs, but still not yet have acquired all the required anatomical features for robust throwing. Since it could neither throw objects for hunting, nor climb trees nearly as well as its ancestors, wouldn't it have suffered from low fitness?

The Nature authors wrote, "It is difficult to establish when high-speed throwing first evolved."1 Establishing the timing of an event that never occurred does present its challenges.

No, it is not at all probable that merely the potential benefits of throwing would drive, push, pull, or in any way direct the wholesale rearrangement of an ape's anatomy toward that of a man's. The fossils keep turning up as either ape or human, and the anatomy of throwing remains uniquely human.2 Thus, both fossils and anatomy confirm the Genesis record of mankind having been created by God.