Why Did Neanderthals Look Different From Us? | The Institute for Creation Research
Skip to main content

When people think of Neanderthals, an evolutionary image of primitive cave men might come to mind. This is bolstered by the perception that they looked very different from modern humans. However, Neanderthals bore four key features that assure us they were human and confirm the Genesis account of humanity’s recent origin.

First, Neanderthal (pronounced Nee–AN–der–tahl) peoples acted quite human. Instead of leaving their dead out in the open, they buried them in caves found in Europe and parts of Asia. This shows a very human-like spiritual awareness. Also, they and their contemporaries left behind artifacts like musical instruments, tools, cosmetics, jewelry, and purses,1 demonstrating human-like intelligence and creativity. 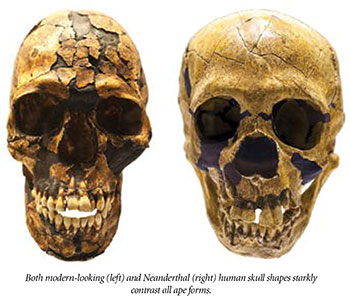 Third, Neanderthal bone structure differences should not overshadow their basically human form. They had prominent eyebrow ridges and sloped foreheads, and their upper arm bones tended to be shorter in proportion to their lower arm bones than those of most modern people. But one can find the same features in living humans. Neanderthals didn’t look that different after all.

Fourth, modern-looking ancients intermarried with Neanderthal people. Some Neanderthal burial sites include individuals that looked just like the folks across the street. Other sites reveal individuals with in-between features.3 And since Noah’s Flood formed the rock layers with the caves that Neanderthals later used to bury their dead, we can assume that these ancient peoples descended from Noah. These four features (burials, DNA, skeletons, and in-betweens) show that Neanderthals were certainly human.

So how did Neanderthal features, only rarely found in today’s population, concentrate into one group that went extinct? A clue can be found in modern humans.

Europeans and Asians have different body ratios. Europeans have shorter torsos with longer arms, while Asians have longer torsos with shorter arms. Most likely, each of these people groups descended from one or a group of ancestors with these physical traits.4 Those ancestral fathers must have moved apart, just as Genesis 11 says happened to the 70 families at the Tower of Babel.5  Each family probably carried its unique language and skeletal features.

Similarly, Neanderthals could have descended from one of these 70 families. If so, then Neanderthals went extinct like many ancient nations, but not before they shared some genes and traits with other groups. No wonder they looked so similar to you and me.

Change in Plant Fossils at K-Pg Fits Flood Model
A new study published in Paleobiology has found that many plant species changed dramatically at the K-Pg (Cretaceous-Paleogene) boundary in Argentina.1...
BY: TIM CLAREY, PH.D.

Yellowstone Super-Eruptions Declining
Recently, renewed activity has had scientists, and the general public alike, alarmed about an impending supervolcano eruption at Yellowstone.1...
BY: TIM CLAREY, PH.D.

Many Martian Volcanoes May Be Mudflows
Tens of thousands of volcano-looking features exist across the northern lowlands and other areas across Mars.1 In the past, these volcanoes...
BY: TIM CLAREY, PH.D.
More Worldwide Catastrophic Evidence Is Everywhere

Mind-Blowing Marine Ammonite in Tree Resin
Can a single fossil showcase the immense power of the global Flood? One such revelatory fossil may have been found recently in Myanmar encased in beautiful,...
BY: TIM CLAREY, PH.D.

Texas Canyons Highlight Geologic Evidence for Catastrophe
In the summer of 2002, record rainfall in the Texas Hill Country overfilled Canyon Lake. Water coursed over the top of its dam and carved huge, steep-walled...
BY: BRIAN THOMAS, PH.D.
More Noah's Ark and Flood

Yellowstone Super-Eruptions Declining
Recently, renewed activity has had scientists, and the general public alike, alarmed about an impending supervolcano eruption at Yellowstone.1...
BY: TIM CLAREY, PH.D.

Venus Likely Geologically Active
In June 2021, researchers used radar images from the Magellan spacecraft to show that crustal blocks on the Venusian surface jostle against one another...
BY: JAKE HEBERT, PH.D.

Brazil Appoints Creation Advocate
Good news is hard to come by regarding the origins battle in education. The majority of educators and scientists around the world have an evolutionary...
BY: FRANK SHERWIN, D.SC. (HON.)
The Latest
NEWS   ACTS & FACTS   PODCASTS