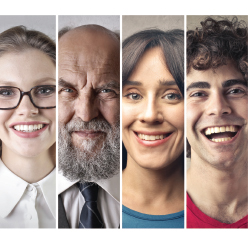 If you’re like me, you appreciate the variations God designed the human frame to express. Wide or narrow, tiny or giant, having high or shallow nose bridges or foreheads, every person differs in some unique way from everyone else. The same holds true for human fossils like those some still call “Cro-Magnon.” Who were these ancient people, and do they somehow suggest humans evolved from non-humans?

Cro-Magnons lived in rock shelters and hunted wooly mammoths, but that doesn’t mean they were becoming human—they were fully human like us.

Cro-Magnons lived in rock shelters and hunted wooly mammoths, but that doesn’t mean they were becoming human—they were fully human like us. These people were skilled artists and left exquisite carvings and paintings. Archaeologists haven’t found any hint of crude scratches or splashes from some imagined pre-human. Cro-Magnons made jewelry from teeth, shells, and tusks. They painted and carved colorful pictures of their prey, sometimes with graphic mortal wounds, on apparently sacred cave walls.1 They used earth minerals, charcoal, and animal fat to craft their paints, which they carefully applied as liquids or powders.2

These early Europeans survived in a primitive setting but were not primitive in mind or body.

As expert hunters, they used spears, stone knives, slings, and pitfall traps. Some of them sewed clothes and sorted out clever ways to survive severe cold—like Inuit peoples still do. And just like the Inuit and others, these early Europeans survived in a primitive setting but were not primitive in mind or body.

Cro-Magnon does not really refer to a particular archaeological culture or a species other than Homo sapiens. Cro-Magnons were named after the rock shelter in France where they were first discovered in 1868. Scientists named the sedimentary layers with their bones and artifacts “Upper Paleolithic.”

Though Cro-Magnons’ head sizes were sometimes larger than our current average, if alive today they would fit into any international crowd. Their anatomy did not differ from ours—it fits well within modern human variance. The only significant difference is when they lived. These first modern-looking humans to inhabit Europe lived in cold, hard times. Many of them lived among limestone outcrops in southern France during the Ice Age.

The Ice Age happened right after the global Flood only several thousand years ago—between Noah’s and Abraham’s generations.3,4 Hot magma rose through rifts in Earth’s crust and heated the oceans during the horrendous Flood. This caused vapor to rise into the sky. It cooled and fell frozen on land and sea.5 For several hundred years, snow piled up faster than it could melt, creating giant ice sheets that covered northern Europe. Cro-Magnon people lived just south of those ice sheets.

If we stick to the facts from science and Scripture, we could just as easily call them “Europe’s first folks.”

They dwelt alongside Neanderthal peoples, proving that Neanderthals did not evolve into Cro-Magnon or other people. These ancients lived at the same time and sometimes in the same places. Other people soon entered their lands, then fought or mingled with them as nations have done ever since. The fancy label “Cro-Magnon Man” might suggest they played an exotic role in some evolutionary pageant. But if we stick to the facts from science and Scripture, we could just as easily call them “Europe’s first folks.”