Where Could Adam's Sons Find Wives? | The Institute for Creation Research
Skip to main content

According to Genesis, Adam and Eve had sons, and 1 Corinthians 15:22 teaches that all of us descended from Adam. But if they only had sons, then where did their children find the wives necessary to continue the human race? Three lines of evidence point to a good answer to this common yet perplexing question.

The first line of evidence comes from Genesis 5:4, which states, “After he begot Seth, the days of Adam were eight hundred years; and he had sons and daughters.” Adam’s sons apparently found wives among his daughters. While today that would be creepy and illegal, following the lines of evidence reveals that it was healthy and normal back then.

Genesis 11 contains the second line of evidence. From Noah to Abram, the numbers reveal an overall steep trend of diminishing lifespans. What caused this pattern? Mutations, which are like copying errors in the genetic instructions for building and maintaining living things, are probably at fault. When the data are plotted on a graph, a slope emerges that resembles many similar curves showing the negative effects of genetic mutation over many generations.1 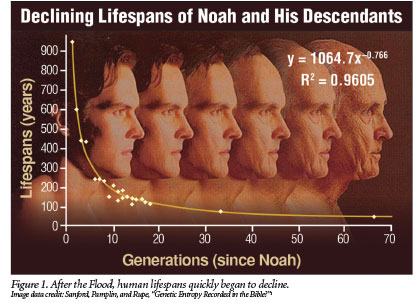 These mutations damage instructions in the DNA, slowing down or disrupting important processes that happen inside cells and thus reducing an animal’s lifespan. This points to a key biological reason why Cain and Seth could have married their sisters. The first generations of people had very few mutations. Even long after the Flood, marriage between close relatives was common. Abram married his half-sister Sarah, for example. God did not declare marriage between close relatives off-limits until He gave the Law to Moses long after Abraham. Today, when we take husbands or wives who are not close relatives, we decrease the chances that our many stored mutations will show up as diseases or shortened lifespans in our children.

Scientists race to discover which mutations cause what diseases, and they have identified thousands.2 These studies reinforce the fact that each generation suffers its own set of new mutations and inherits its ancestors’ existing mutations; we each have more mutations than our parents. Genes are not improving, and new genes are not arising to replace damaged ones. Instead, mutation-caused diseases keep arising. Our DNA is definitely going downhill fast, contradicting evolution’s required millions of years, but confirming recent creation.

By winding back the clock of mutational buildup, we eventually reach a point of perfect human genes.3 Can you guess who had those? This third line of evidence—mutation buildup—shows that because Adam’s sons and daughters had so few mutations, they could have married one another without fear of disease or the abbreviated lives that mutations bring.

Genesis 5 says sisters were available as wives, and Genesis 11 shows a decreasing lifespan that we link to mutations. Today, scientists measure a mutational buildup over time. When we wind that mutation clock back to the beginning, we find what the Bible said all along: At one time there was a perfect man and a perfect woman who raised genetically pure children. Adam and Eve’s sons and daughters could have married their close relatives with no problems at all.