Mr. Lee Kroeger has been an effective champion of creation on a local level for many years. He presents a brief testimony and something of his methods as an encouragement to others. His most effective visual tool has been his scale model of Noah's Ark. Any home handyman could follow his directions and develop a winsome teaching aid for church and school audiences. Ed.

Creation Science literature has meant a great deal to me these past 25 years. The book that gave me a hunger for more and more information was The Genesis Flood written by Drs. Henry Morris and John Whitcomb. It revealed compelling evidence that science points to an Almighty Creator God, that there really was a mountain covering, worldwide flood, and that evolution is nothing but a lie. The fact that the media unquestioningly reinforces the "millions of years," the flood as a myth, and evolution as fact concerned me greatly. I was afraid that our children would be conned into believing them when they attended high school and college. I finally realized that I could be sharing my knowledge with children, teens, and adults to combat this cancerous teaching of evolution. Sharing the Bible and scientific facts for their good and to the glory of God became my stated goal, especially as I reached retirement age.

I decided on a slide-lecture approach, and designed and gathered slides for my first program called "Noah's Ark and the Flood." Subsequently, I decided to build a scale model of the Ark to help people visualize its mammoth size, and that it wasn't some little pointed boat with a giraffe head sticking out. The visual display worked and seemed to make the whole story believable and many came to embrace both Christ and the Creator. The model Ark became a witness to the truth of the Bible and a visual aid with which to point out God's all encompassing design.

Over the months I added three more programs: Origins: Creation or Evolution; The Dinosaur Story; and The Young Earth. With the help of the Institute for Creation Research, I added more visual aids which include an animated dinosaur display and many fossils. I speak at Christian schools, teen groups, home school groups, Sunday school classes, seniors, businessmen, etc. I diligently seek speaking engagements because it is so vital that people are shown that the facts of science point to a Creator God, a worldwide, mountain covering Flood, and a young earth. The ultimate goal is not to win an argument or put on a show, but to point people to God's Creator Son, the Lord Jesus, who died and rose again so that we may have eternal life.

I am a young 74 now, and I plan to continue my ministry as long as God enables. It is my prayer that, through this article, I can encourage others to have a more effective ministry in creation evangelism. I especially recommend construction of an Ark model. In my ministry, no other tool has been used to greater effect. As students of all ages visualize its immense size as compared to animals and objects with which they are familiar, the Bible comes alive and becomes even more credible.

In Genesis 6, God gives us the overall size and a few features of the Ark. Using an 18-inch cubit (a minimum size), the Ark was 450 feet long, 45 feet high, and 75 feet wide, with three interior "stories" and a "window" on top. Other details are speculative. 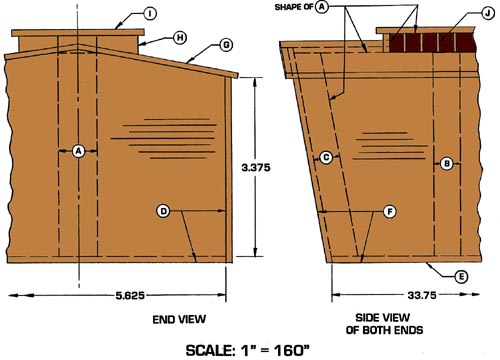 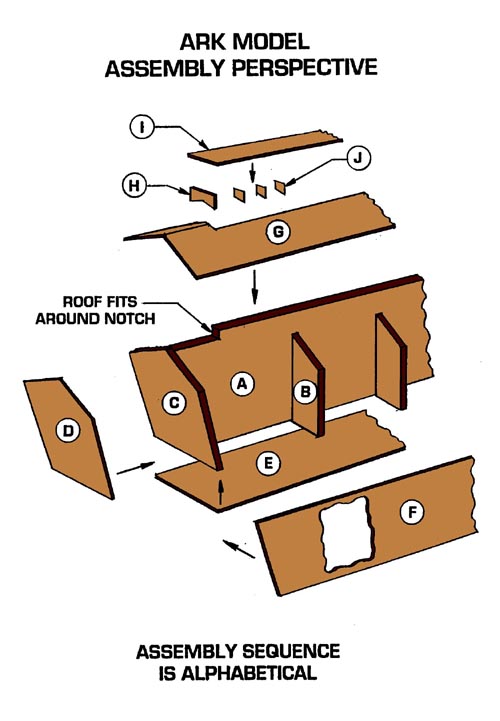 Size of the Scale Model Ark

A scale of one inch equals 160 inches is recommended because it is "N" gauge in model railroad terms, and many objects in that scale are readily available for comparison. With this scale, the model is 33.75 inches long, 3.375 inches high, 5.625 inches wide. The finished model and platform at this scale are small enough for easy transport, but large enough to make an impression.

Construction of the Ark

The internal structure is composed of 11 pieces of 3/4 inch white pine or 1/2 inch particle board. (Boards must not be warped.) This includes one vertical lenghwise structure (a), 8 formers, (b) four on each side spaced about seven inches apart), and two end caps (C).

The outer surface (skin) material is unpainted tan 1/8 inch thick masonite. (The complete skin is lined with black ink about 1/8 apart to simulate planking.) The skin is composed of 10 pieces: (d) two ends, (e) one bottom, (f) two sides, (g) two half-roofs, (h) two window end pieces, (i) one top over the windows. The many window frames are 1/16 balsa wood, spaced 1/4 inch apart and glued in place after assembly of roof and top. The roof and top have a 1/8 inch overhang all around.

Note: A cutaway in the side is optional, but it shows the three floors and stalls. (Make an assembly of animals and glue them to the floor inside the Ark behind the cutout.)

Use white glue for all parts.

Construction of the Base

The base is a simple 22 inch by 48 inch box. The desired contour is obtained by gluing formers inside the box, on top of which is screen, plaster, and scenery. There are five logs mounted in ten "Y" logs to elevate the Ark off the ground. I positioned the door at the third level with simulated ropes. Note the railroad cattle car and automobile to denote the immense size of the Ark.

The "N" gauge scale is used because scale people, animals, and trees may be purchased in a model railroad store. Trees may also be purchased in a cake decorating shop and can be made from old artificial Christmas tree branches. Improvising may be required, such as: horses can be made into giraffes, zebras, and camels. From a bag of toy farm animals, I made the elephants and dinosaurs. Tiny snakes were made out of wire.

It is my prayer that many will follow these simple steps and carry the vital message of creation to the multitudes who need it so, maybe for vacation Bible School this summer. I especially encourage grandfathers to make one for the grandchildren.